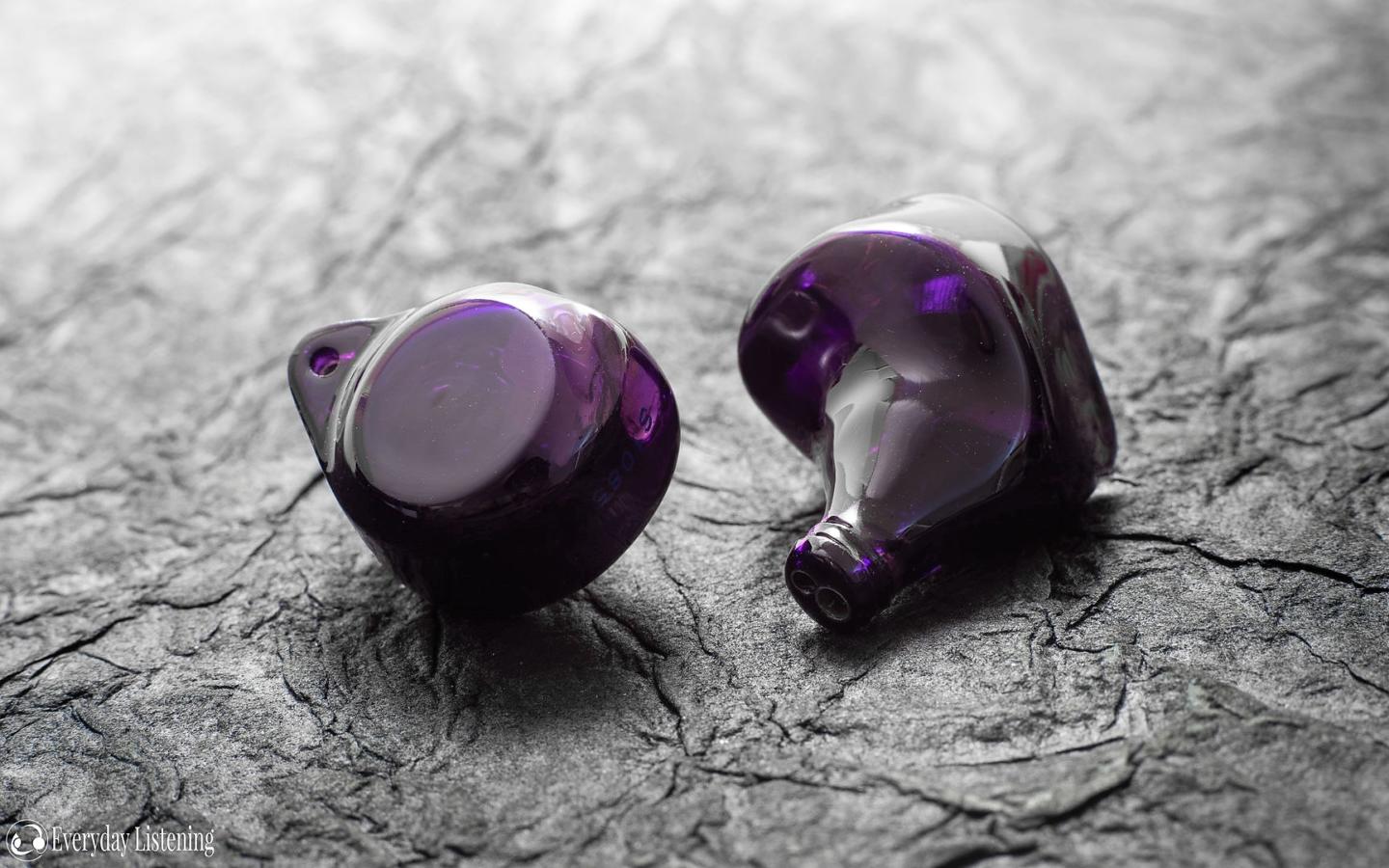 The CE-5 has a modest v-shaped signature on account of its emphasized sub-bass and lower-treble. This isn’t a reference earphone by any stretch of the imagination. Rather, the CE-5 was intentionally designed to chase engagement and energy. It also isn’t the most linear or realistic earphone, but the CE-5 remains one of the most impressive V-shaped earphones I’ve heard.

In particular, its recessed but well-separated midrange and detail forward presentation perfectly complement the more vocal forward mastering style of Japanese albums without over-brightening the high-end. Moreover, the CE-5 has plenty of technicality to flatter other music too. I gave the CE-5 200hrs of burn-in to ensure optimal performance during final evaluation, more in the following sections.

The CE-5’s bass presentation is big and bold yet controlled. And, as sub-bass is the main focus of emphasis, it doesn’t overly colour other aspects of its sound. Sub-bass extends to the deepest depths of human perception, with powerful emphasis producing visceral rumble and slam. Mid-bass is less flavoured with a smaller lift infusing warmth and body into the CE-5’s low-end. And, as is fairly typical of bassy but clear in-ears, its mid-bass feeds into a relatively attenuated upper bass response intended to increase separation between bass and mids, minimising colouration.

What makes the CE-5 a unique earphone then, is the quality of that low-end. Of course, some bloat is present by nature of their tuning but muddiness is kept minimal as a result of the CE-5’s excellent transience and control. The CE-5 is incredibly tight and agile without a hint of sloppiness, even during faster tracks. And, as notes have slightly shorter decay, bass remains well separated and very defined despite uneven emphasis. The CE-5 thus excels through a combination of physical slam and impact combined with enhanced articulation; they aren’t balanced, but execute their bassy sound with technical mastery.

The Hyla’s midrange is bright and clear yet impressively neutral in tone. Both male and female vocals occupy a slightly distant stage position while instruments are brought more to the fore through the earphone’s aggressive, V-shaped signature. Still, by combining increased mid-bass warmth with reduced lower-midrange density, the earphones produce nicely transparent vocals and instruments even if both can lack a little body. Still, The CE-5’s lower midrange has plenty of fullness to engage and to achieve a natural presentation while capitalising on increased clarity and separation.

Upper mids are subjectively less influenced by the CE-5’s bass colouration, delivering smooth and extended if laid-back female vocals. Midrange resolution is terrific, compounding upon a brighter signature to grant great clarity without the associated unnatural raspiness or sibilance. Upper mids also possess relatively neutral body and tone, though background layers can sound a little thin as a result of increased emphasis on articulation. Resultantly, the CE-5 is a lively yet clean in-ear focussing on clarity and detail over linearity and timbre. They aren’t quite as resolving of background details as more natural, linear in-ears, but do provide a very revealing sound focussing on transparency and resolution.

Through emphasized yet well-integrated lower-treble set to a more attenuated middle-treble, the CE-5 delivers a treble presentation that boasts pristine attack while maintaining a dark, clean background. Some may find them a little hot, but the Hyla’s aggression brings intricacies to the fore with great detail and crispness permeating throughout its presentation. And, due to the relatively gradual nature of its emphasis, the CE-5 doesn’t sound overly thin or peaky, though they aren’t especially natural either. Their reduced middle treble may not sound ideal, as it saps some air and shimmer from their sound. However, in the context of the CE-5’s signature, this style of tuning works wonders, creating a treble presentation that remains composed and controlled despite its energy.

Moreover, treble is incredibly well extended with upper-treble extending linearly into the highest registers. This contributes to the earphone’s very high resolution that enables great detail-retrieval despite its uneven signature. Lower-treble elements such as high-hats do sound slightly tizzy due to emphasis on upper harmonics, but notes are very clear and wholly resolved. Moreover, strings, though aggressively detailed, can be a little forward at times. That said, decay is only slightly short and every note is accurately textured. These traits produce a sound that is resolving and clear if lacking some smoothness and accuracy.

The CE-5 has a huge soundstage that extends well beyond the head; not on account of enhanced air, but due to its slightly more laid-back midrange presentation and excellent treble extension. And though not especially linear, layers are very well delineated, perhaps to the extent that the CE-5 misses some intermediate density. However, as a result, instruments are very easy to locate and vocals remain well-centred. Due to the agility of the Hyla’s sound, they also produce precise directional cues. Their larger low-end isn’t conducive towards a separated sound, however, the CE-5 actually achieves high levels of separation due to its clearly layered sound. Again, this isn’t an earphone that strives for realism, but rather an earphone whose meticulous sculpting provides overall coherence.

The CE-5 has a very low 8.9ohm impedance combined with an average 97dB sensitivity. In use, it’s a fairly sensitive in-ear but also one that is very obviously affected by output impedance. From a source of higher Impedance, the CE-5 can sound considerably bassier which compromises its transparency and clarity. So though it easily attains higher listening volumes, even from smartphones, the CE-5 definitely benefits from a resolving source with a low output impedance.

Echobox Explorer: Huge bass, somewhat overwhelming. Mids are more recessed by comparison but smooth and naturally bodied. Reduced clarity and transparency. Highs are detailed, takes some edge off the CE-5’s lower-midrange while retaining crispness. Lacking the extension of other DAPs, its stage is quite spacious but not well separated or organised. Easily audible hiss on low-gain. Unspecified output impedance, it is likely quite high.

Hiby R6: Considerably larger bass, a bit bloomy. Mids are recessed but clear, lacking some transparency. Highs sound a little blunted but still extend nicely. A lot smoother overall and quite bass dominated, stage dimensions suffer as do staging properties; imaging is ok but separation is notably reduced. No hiss detected on low-gain. Significant signature change is likely a result of higher output impedance of 10ohms.

Fiio X7 II w/AM3A: The Fiio is ever so slightly engaging, otherwise, it’s a solid reference source. The Hyla has a tight low-end with a little less body. Mids are slightly recessed but very clear. Highs are extended and very detailed with a little extra edge. The X7 II has a more intimate stage relative to some other DAPs, it isn’t as immersive as the iBasso combo. No hiss detected on low-gain.

iBasso DX200 w/AMP5: Excellent synergy, this amp module has a slightly mid-centric signature with a smoother high-end that perfectly complements the Hyla. The CE-5 sounds more balanced, very controlled and with excellent resolution. The DX200 offers a very large soundstage with improved layering and imaging, heaps of detail. No hiss detected on low-gain.

The stock cable is a respectable 6N OFC copper unit though there’s always room for improvement. Given that the CE-5 is a highly resolving in-ear, I was curious to put this into effect! Of course, this is just my subjective impression, take it with a grain of salt.

Introducing the EA Eros II into the mix produced numerous changes. Bass became tighter and more articulate while retaining its impact. Mids received a notable benefit, sounding even clearer with a more liquid smoothness. I didn’t enjoy the impact of the cable on male vocals, that became a little thin and strained, but upper mids were supremely smooth and layered; perhaps this character can be attributed to the EROS II’s higher resolution and extension. Highs also received some benefits, becoming more detailed, especially with regards to micro-detail. The cable granted a slightly brighter signature overall, which does sap some of the cleanliness from the CE-5, but also aids air and separation. I didn’t notice any expansion in the CE-5’s stage, but imaging did improve a fair amount, especially with regards to midrange layering.