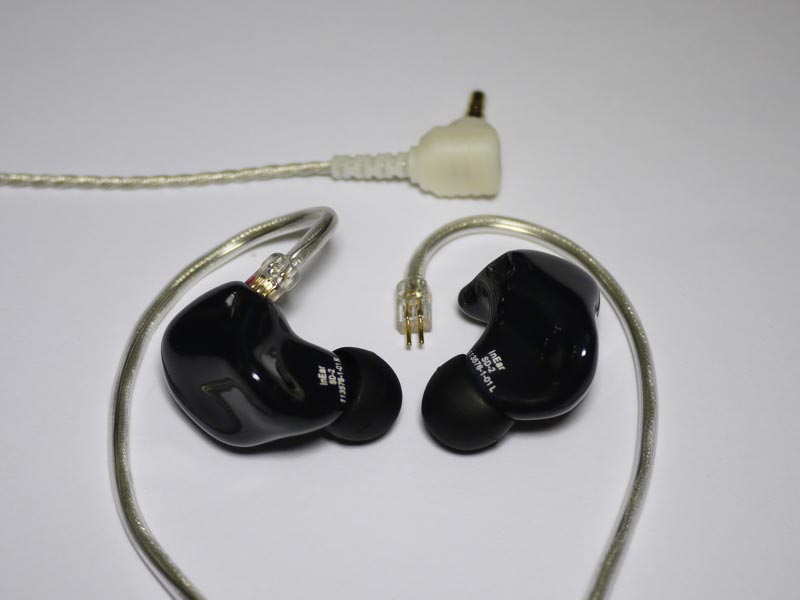 Accessories (4.5/5) – Single-flange silicone tips (3 sizes), hearing aid cleansing wipes (3 sets), ¼” adapter, and crushproof hard shell pelican carrying case with carabiner
Build Quality (5/5) – The StageDiver earphones are designed for longevity in professional applications and utilize extremely solid-feeling acrylic housings. Nozzles are protected by color-coded, interchangeable filters. Replacement filters can be purchased separately and come in sets of 15 pairs, complete with storage carousel and filter changing tool. The cable is sturdy and detachable, in the common 2-pin configuration
Isolation (4/5) – Very good even with the stock single-flange eartips
Microphonics (5/5) – No noise in the flexible twisted cable
Comfort (3.5/5) – The housings of the StageDiver earphones were designed based on an overlay of over 500 ear impression scans. The shape is very unique, even among “universalized” custom in-ears, because the shell extends into upper part of the concha. This provides an extremely secure and stable fit but with smaller ears the concha “fin” can exert some pressure on the ear, so I would recommend trying before buying for those with small ears. Note: a more compact version of the StageDiver 2, the StageDiver 2S, is available as of 2014. More info here.

Sound (9.3/10) – The StageDiver 2 uses a 2-way, dual-armature configuration. Unlike its triple-driver sibling, the SD-2 is tuned for a balanced sound and impresses first and foremost with its impressive end-to-end extension.

The bass of the SD-2 is very level, offering slightly more overall presence than sets such as the Etymotic Research ER4S and VSonic VC1000. Compared to these, the SD-2 has a warmer tone, a-la HiFiMan’s RE-400, but still sounds pretty neutral overall. Its bass has very natural punch and excellent extension, maintaining presence all the way down.

The midrange of the SD-2 is well-positioned, coming across as neither recessed nor forward. Thanks to the natural and fleshed-out low end, the SD-2 never sounds mid-centric the way the HiFiMan RE-400 sometimes can. The StageDiver set also has more natural bass impact and depth than the Custom Art Music One while maintaining similar clarity and note thickness. The added bass makes the SD-2 appear less mid-focused than the Music One, but the note thickness keeps it from sounding mid-recessed or lacking midrange presence.

The top end of the SD-2 maintains a good balance of presence and smoothness. It’s not as bright as dual-driver earphones based on the Knowles TWFK driver, such as the Fischer Audio DBA-02 and VSonic VC1000, and as a result is not at all prone to harshness or sibilance. At the same time, it isn’t lacking in extension and has decent energy, resulting in a more balanced treble presentation than, for example, with the RE-400. For me personally, a little more treble energy wouldn’t be a negative but the SD-2 follows a treble curve that’s safe and comfortable, staying true to its stage-friendly name by avoiding listening fatigue.

The presentation of the StageDiver 2 is above average in size, reminding me of the EarSonics SM64. Both width and depth are excellent and the earphones sound very cohesive and natural, no doubt a result of the solid end-to-end extension and clarity across the entire frequency spectrum. Stereo imaging doesn’t leave anything to complain about, either.

The two StageDiver models share a very strong family resemblance – in fact, it’s tough to pick the better earphone between the two of them. The triple-driver SD-3 offers more bass presence, which is especially noticeable in the subbass region. Its bass is extremely deep and provides some of the best impact I’ve heard from a universal-fit BA earphone without giving up any bass quality to the SD-2. The SD-2, in comparison, has less punch, as well as less rumble and power.

As a result of the added bass presence, the SD-3 sounds a little warmer overall. The SD-2, on the other hand, appears a touch clearer and more neutral. Its presentation is less thick and full-bodied compared to the SD-3 but I found its balance to produce a more natural sound. Tonally, the SD-2 is a little brighter due to its lack of bass bias. The soundstages of the two earphones are very similar with the SD-3 sometimes sounding a little more forward and aggressive thanks to its bass emphasis and slightly more present lower mids.

The RE-400, a sub-$100 dynamic-driver earphone, is highly reminiscent of the StageDiver 2 in sound signature, though there is a substantial gap in performance in favor of the SD-2. The SD-2 has a touch more bass than the RE-400, with the difference being more apparent in the subbass region. It is also clearer and slightly more resolving, and boasts more treble energy while still remaining extremely smooth and non-fatiguing, beating HiFiMan at their own game. The RE-400, on the other hand, has more forward mids and sounds a little too focused on its midrange. The soundstage of the RE-400 also appears a little too forward and flat next to the spacious and well-layered StageDiver.

Comparing the SD-2 to the GR07, one of my favorite sets in its price range, leaves no doubt as to the StageDiver’s superiority. Most apparent is that the SD-2 produces a clearer sound with tighter bass. The GR07 sounds bassier, with mids that appear recessed in comparison. The treble of the GR07 sounds splashy and exaggerates sibilance whereas the SD-2 is much smoother. Overall, the SD-2 sounds more neutral and more natural, making the GR07 seem colored in comparison.

The CT-200 is a dual-driver custom-fit monitor from Florida-based Clear Tune Monitors. The most noticeable difference between the SD-2 and CT-200 is in bass performance – the bass of the StageDiver is greater in quantity, extends much better into the sub-bass region, and sounds a great deal more effortless. The CT-200 lacks the more natural bass impact of the SD-2. In the midrange, the CT-200 sounds a touch clearer and has more presence in the upper mids. The SD-2 has less upper midrange presence and a darker overall tone. The CT-200 also has a slightly wider headstage, sounding more out-of-the-head overall.

The Alclair Reference is a 3-driver custom monitor with a “reference” sound signature. In many ways its performance is comparable to that of the SD-2 – bass quantity is about on par and while the Reference has slightly more recessed mids, clarity is similar between the two except at high volumes, where the Reference wins out. Tonally, the Reference is brighter and more peaky compared to the very smooth StageDiver. Its treble is hotter and more splashy, and sibilance is exaggerated compared to the SD-2. The treble of the SD-2 has less energy than I like, but still sounds more natural to me overall. The Reference has a wide soundstage similar to the SD-2 but boasts slightly better imaging.

Value (8.5/10) – One of the most well-rounded earphones I’ve ever had the pleasure of trying, the InEar StageDiver 2 amazes with its all-round accuracy, exhibiting tight bass control, level mids, and a good balance between treble presence and smoothness. It can go toe-to-toe with any universal monitor in my collection and provides a compelling upgrade for popular mid-priced sets such as the HiFiMan RE-400. Construction quality on-par with custom in-ears only further substantiates the price tag of these German-made wonders.