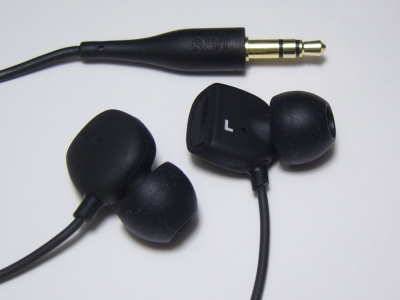 Accessories (4.5/5) – Single-flange silicone tips (5 sizes), 3.5mm splitter, airplane adapter, extension cord, and plastic protective carrying case
Build Quality (4/5) – The matte-black rubberized plastic housings are very pleasant to the touch and feel rather solid. The paper filters used by the old j-JAYS have been replaced with a permanent metal mesh and the cable has undergone a slight improvement as well, though it remains somewhat plasticky and still carries a bit of memory character. Strain reliefs are short on cable entry and nonexistent on the y-split but the modular cord provides extra protection from snags and tears
Isolation (2.5/5) – The ergonomically-styled t-JAYS are shallow-insertion earphones and isolation is only average
Microphonics (3.5/5) – Microphonics are present in the cable and can be bothersome. Though JAYS claims that the t-JAYS can be worn over-the-ear, channels have to be swapped in order to do so. Admittedly, microphonics are nearly non-existent with over-the-ear wear
Comfort (3.5/5) – The t-JAYS are very light but the design leaves a bit to be desired. Though the shells are some of the most ergonomic I’ve seen on a longitudinally-mounted dynamic-driver earphone, the cable exit points on the bottom of the earphone prevent them from being flush and can cause a fair amount of discomfort over time. Over-the-ear comfort is much better but requires stereo channels to be swapped

Sound (6.6/10) – Right out of the box the t-JAYS gave me a small reminder of the signature of my previous JAYS dynamics, the j-JAYS. Like the j-JAYS, the t-JAYS are slightly dark and a bit warm, with good low-end extension and big, hard-hitting bass. Happily, the t-JAYS don’t suffer from a lack of clarity and easily outpace the j-JAYS in overall sound quality from the get-go. The large drivers provide deep and plentiful bass without a loss in clarity. Though the bass tends towards ‘boomy’ rather than ‘punchy’ on certain tracks, the t-JAYS exercise impressive control over their voluminous low end most of the time. Compared to the bass-monster Fischer Audio Eterna, the t-JAYS sound cleaner and more restrained but lack the texture and articulation, as well as the sheer bass weight, that all make the Eterna’s low end so engaging. Compared to the cheaper Sony XB40EX, the low end of the t-JAYS is better in every way except impact and rumble quantity, making the bass of the XB40EX sound like a runaway train on a downhill incline.

The midrange of the t-JAYS is warmed up slightly by the bass but remains in focus at all times, which is always a pleasant surprise for a bass-heavy earphone. The midrange emphasis of the t-JAYS lags slightly behind the mid-forward ViSang R03 but makes the XB40EX and even the Eterna sound a bit recessed in comparison. The mids are full and very smooth, boasting great detail and clarity. In fact, though the mids are not as thick or sweet as those of the R03, the clarity is arguably better, helped along by the prominent treble lending an extra bit of air to the sound.

The treble itself is crisp, clear, and in good balance with the midrange and low end. It is a bit hyped-up and can sometimes make already-sibilant tracks more sibilant, though it won’t add any artifacts to well-mastered recordings. Detail and sparkle are not class-leading but competitive in both quality and quantity. Unlike the warmed-up midrange, the treble can sound a bit hard-edged and sterile but softness of note is something only a few budget-oriented dynamics get right,and the t-JAYS are generally very inoffensive, unlike the Hippo VB or and other treble-heavy dynamics in the price range. Upper-end extension is solid and only misses the smallest bit of information at the very top, much like the ViSang R03.

The presentation of the t-JAYS is best classified as ‘competent’, along with the rest of the sound signature. They are warm earphones but the prominent treble gives a bit of much-needed air to the sound. The soundstage is moderately wide and seems a bit tubular in nature – nothing out of character for mid-range dynamics. It isn’t as enveloping as the 3-dimensional space of the R03 or wide-open presentation of the Thinksound TS02 but does give a good sense of both distance and direction when it comes to sonic cues. Instrumental separation is again not exactly class-leading but perfectly adequate for the type of consumer-oriented sound JAYS seem to be pursuing with their dynamics.

Value (7/10) – After my disappointing experience with the entry-level (and now defunct) j-JAYS, I was really hoping that the t-JAYS would sacrifice some of the style for substance. Happily, JAYS managed to pack in more of both. The t-JAYS Three are mainstream earphones with a mainstream sound signature but the aesthetics and presentation simply go above and beyond. While I’m in equal measure a fan of the no-frills approach to product packaging taken by companies like Thinksound and RadioPaq, opening a package from JAYS for the first time is an experience in itself. The one attribute I will complain about is the over-the-ear fitment – though the t-JAYS are claimed to be designed for both cord-down and over-the-ear wear, the latter, while far more comfortable, requires a swap of the left and right earpieces. Ergonomically-designed dynamic-driver earphones are fairly difficult to come by but the t-JAYS are just a tease without a Left/Right channel swap adapter of some sort. Aside from that, the t-JAYS seduce with a wholesome accessory pack, decent build quality, and competent sound, not to mention the 2 year warranty. For those who have ears large enough to accommodate the t-JAYS in the cord-down configuration (or don’t mind reversing channels) and aren’t bothered the modular cord, the t-JAYS have plenty to offer. And, like all of the other JAYS products I’ve come across, they make a great gift.