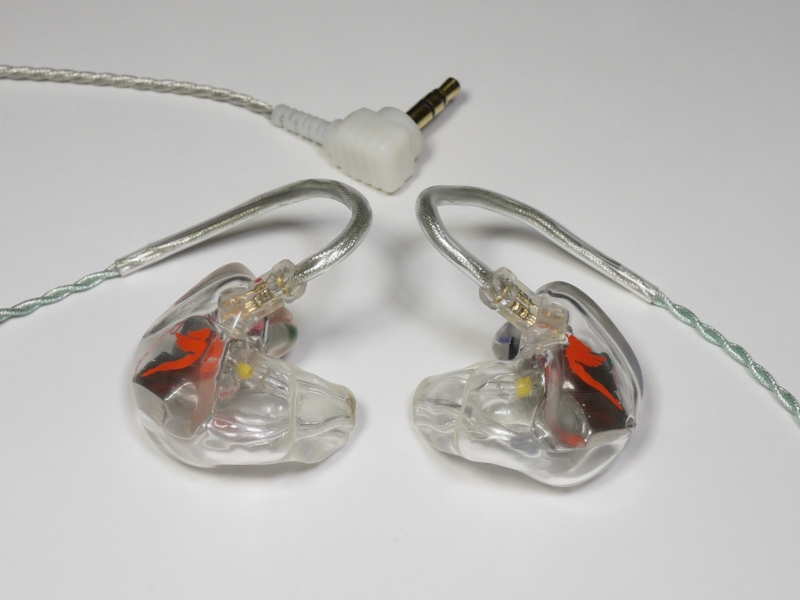 Accessories (4.5/5) – Cleaning tool, Comply Soft Wraps, Otterbox 1000 hard-shell carrying case, and drawstring carrying pouch
Build Quality (5/5) – The JH13 boasts fantastic fit and finish all around, with crystal-clear shells and faceplates. The cables use the common 2-pin connector. Numerous customization options are available for the earphones via the JH Audio website
Isolation (4.5/5) – The isolation provided by the custom shells is excellent – slightly below that of silicone-shelled customs but on-par with my UM and Hidition units
Microphonics (5/5) – No cable noise to speak of
Comfort (5/5) – The nozzles of my JH13 were cut a bit longer than average, similar to the UM Miracle. As with all acrylic customs, the shells are hard but very comfortable when fitted correctly. If the earphones are uncomfortable after an initial break-in period, a refit is probably a good idea. JH Audio does refits at no cost within the first 30 days and for $50 thereafter

Sound (10/10) – A staple of the audiophile scene since its release in 2009, the JH Audio JH13 Pro underwent an update dubbed “Freqphase” last year. Both the JH13 and the bassier JH16 are currently shipping with the Freqphase tweak, which is meant to ensure phase coherency between the drivers by delivering all frequencies to the ear at once. Regardless of the technical details, the JH13 Pro sounds absolutely fantastic to me. It is tight, balanced, and impossibly clear. The bass is quick and extended, with a few decibels of boost and the ability to produce a good amount of punch when necessary. The JH13 can sound lean and quick one moment, and crank out beats with some serious authority the next. Its tone is, on the whole, a bit warmer than that of the Etymotic Research ER4S, but still close to neutral.

Great dynamics and transparency carry over to all aspects of its sound – in addition to good bass control, the JH13 boasts unbelievable clarity and resolution. The mids are in balance with the bass and expose every nuance of the recording with great definition. The sound is, on the whole, a little fuller and more natural compared to the Etymotic ER4S without sacrificing any clarity whatsoever. Comparing the JH13 to the quad-armature Ultimate Ears UE900, for example, makes the UE set sound muffled, thanks in part to its recessed upper midrange and slightly boomier bass.

The treble of the JH13 is nicely prominent but not at all harsh or sibilant. Treble energy is spot-on, appearing about even with the Etymotic ER4S while doing a similarly good job of minimizing harshness and sibilance. Westone’s flagship custom monitor, the ES5, sounds a little dark in comparison to the JH13 and appears a touch more congested. The JH13, on the other hand, sounds airy and has superb instrument separation and stereo imaging. Is presentation has much better depth than that of the Ety ER4S and an airier, more open feel than that of the UE900. The sum sound is crisp and accurate without missing out on the enjoyment factor, especially for those who don’t need tons of bass boost to tap their toes.

VSonic’s dynamic-driver flagship is an order of magnitude less expensive than the JH13 but, as one of the more capable earphones in its price range, makes for an interesting comparison. The most obvious difference between the two lies in the bass – the GR07 has a softer bass presentation that lacks the speed, tightness, and texture of the JH13’s low end. Overall bass quantity is similar between the two earphones but because it lacks the bass control, as well as the more forward midrange, of the JH13, the GR07 sounds boomier in comparison and its low end appears heavier and more intrusive.

The midrange of the GR07 is not as prominent as that of the JH13 and lacks some clarity in comparison. The treble of the VSonics tends to be hotter and vocals generally appear more sibilant. The JH13 sounds significantly smoother, but not for lack of energy. Rather, it follows a treble profile more like that of the Etymotic ER4S, avoiding the peaks that can make the GR07 offensive while maintaining similar overall treble presence. The JH13 also has a more three-dimensional presentation with better depth compared to the VSonic set.

One of the few accuracy-oriented dynamic-driver earphones in its price range, the RE-600, much like its lower-priced RE-400 sibling, is an impressive performer when it comes to delivering accurate, yet smooth sound. The biggest difference between the RE-600 and JH13 is the treble – the HiFiMan set sounds dull and lacks treble presence in comparison. Its tone is a little warmer overall and there is a touch more bass bleed and less clarity than with the armature-based JH13. The JH13, due in large part to its tighter bass and superior treble presence, appears a little more detailed and textured, and boasts a more spacious and airy presentation with better imaging.

Unique Melody’s flagship is one of my favorite custom-fit earphones and the standard against which I’ve compared all other monitors for the past several years. Its 3-way, 6-driver configuration and balanced, spacious sound make it a natural competitor for the JH13, but on closer inspection the two earphones are as different as they are similar. The bass of the Miracle is rather level whereas the JH13 has its low end boosted by a few decibels. This is especially noticeable in the mid-bass region and gives the JH13 greater overall bass impact. It also makes the Miracle seem more focused on deep bass in comparison as there’s no mid-bass boost to get in the way. Nonetheless, the punchier JH13 still sounds a touch more resolving than the Miracle.

The JH13 boasts more midrange presence and clarity while the UM set has more recessed mids that end up sounding a bit veiled in comparison. At the top, the Miracle is a little smoother, but otherwise similar in both treble energy and top-end extension. The presentation of the JH13 is, on the whole, more forward but both earphones provide a great sense of space and have excellent imaging.

Sensaphonics’ flagship earphone is a pro-oriented monitor with good bass, a mild midrange focus and smooth, inoffensive treble. The JH13 boasts similarly ample bass impact on tracks that call for it but also has greater ability to scale back, providing tighter, quicker, less intrusive bass when necessary. It is brighter, clearer, and more detailed than the 3MAX, revealing fine musical nuances more readily and sounding more refined overall. The JH13 also has better treble energy and sounds more crisp. It is more spacious as well, with a soundstage that boasts better width and depth in comparison to the 3MAX.

The 4-way, 6-driver NT 6 is less bassy than its pricier NT6-Pro sibling, just as the JH13 Pro is less bottom-heavy than the pricier JH16. The similarities between them run deeper, however. For me, both of these monitors are the cream of the crop – impossibly clear and resolving, with very good imaging and lifelike presentations. The differences between them lie largely in sound signature, with the JH13 being a pinch on the warm side of neutral and the NT 6 being slightly bright.

While the low end of the NT 6 is extended, punchy, and dynamic, it doesn’t crank out bass with quite the same authority and impact as the JH13. Personally, I don’t find the low end of the JH13 excessive, but the bass of the Hidition is flatter in profile and a little tighter as a result. The more mid-bassy JH13 carries a slightly warmer tone, though the mids on both earphones are completely free of veiling and fantastically clear. The NT 6 is brighter, with more emphasis on high frequencies, while the JH13 is a little flatter up top. On the soundstage front, the JH13 sounds a little more 3-dimensional and enveloping while the NT 6 has slightly less depth to it. Interestingly, the JH13 Pro is also significantly more sensitive than the NT 6.

One of priciest and most exclusive universal-fit earphones in the world, the Japan-made TG334 utilizes a quad-armature configuration to deliver a warm and powerful sound with smooth, relaxed treble. It sounds quite different from the accuracy-oriented JH13 – significantly bassier and darker in tone. The JH13, with its tighter, less powerful low end, makes the TG334 sound quite muddy in comparison. The mids of the TG334 also appear somewhat muffled next to the JH13, with the JH Audio set offering up better treble presence and superior overall balance as well. On the presentation front the two are more similar, but the TG334 is slightly less coherent-sounding than the JH13.

Value (9.5/10) – The IEM market has changed a lot in the past several years, becoming saturated at an increasing rate. Still, of all of the earphones I’ve tried recently, the JH Audio JH13 Pro has been the biggest eye-opener, delivering clarity and resolution unlike anything else I’ve heard. It effortlessly produces extremely nuanced and refined sound across the entire frequency range, complete with fantastic instrument separation and imaging.

I do believe that the best Hi-Fi component is one that does its job so well, you don’t even know it’s there, and after a year spent with the JH13 Pro I still marvel most at its ability to simply fade away, leaving only the music. In fact, finding anything that mildly displeases me about this earphone is a struggle, but one I really don’t mind.