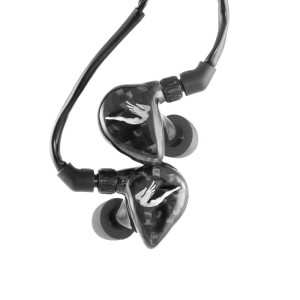 The Roxanne is among the priciest universal-fit earphones on the market, beating out even the FitEar ToGo! 334, but to the best of my knowledge is also the only one with a staggering 12 balanced armature drivers per earpiece. As with the custom-fit Roxanne, the drivers are in a 3-way quad low, quad mid, quad high configuration with triple bore output. It also uses JH Audio’s FreqPhase phase alignment technology – same the JH13 Pro, one of my favorite custom in-ear monitors.

The Roxanne is noteworthy also for its bass adjustment mechanism, which allows variable bass output of up to +15dB below 100Hz. Bass boost is controlled via a cable-mounted pod with individual bass screws for the left and right channels. A matching tool is included.

Due to the cable-mounted tuning system, the Roxanne uses cables with proprietary 4-pin connectors, which attach to the earpieces with a twist-lock mechanism, similar to Sony’s EX-series monitors. Fans of aftermarket cables will have to suck it up and use the stock cord with these, at least until compatible upgrade cables hit the market. This also means JH Audio’s headset cable won’t be compatible with the Roxanne.

The Roxanne is yet another in a long streak of high-end universal IEMs being released by customs manufacturers – in the past few weeks alone we’ve seen announcements of the Lear BD4.2, EarSonics S-EM6 Devil Edition, and Noble FR/PR. This doesn’t make choosing the right set any easier for those willing to spend big bucks, but more competition for the title of top universal IEM is never a bad thing.