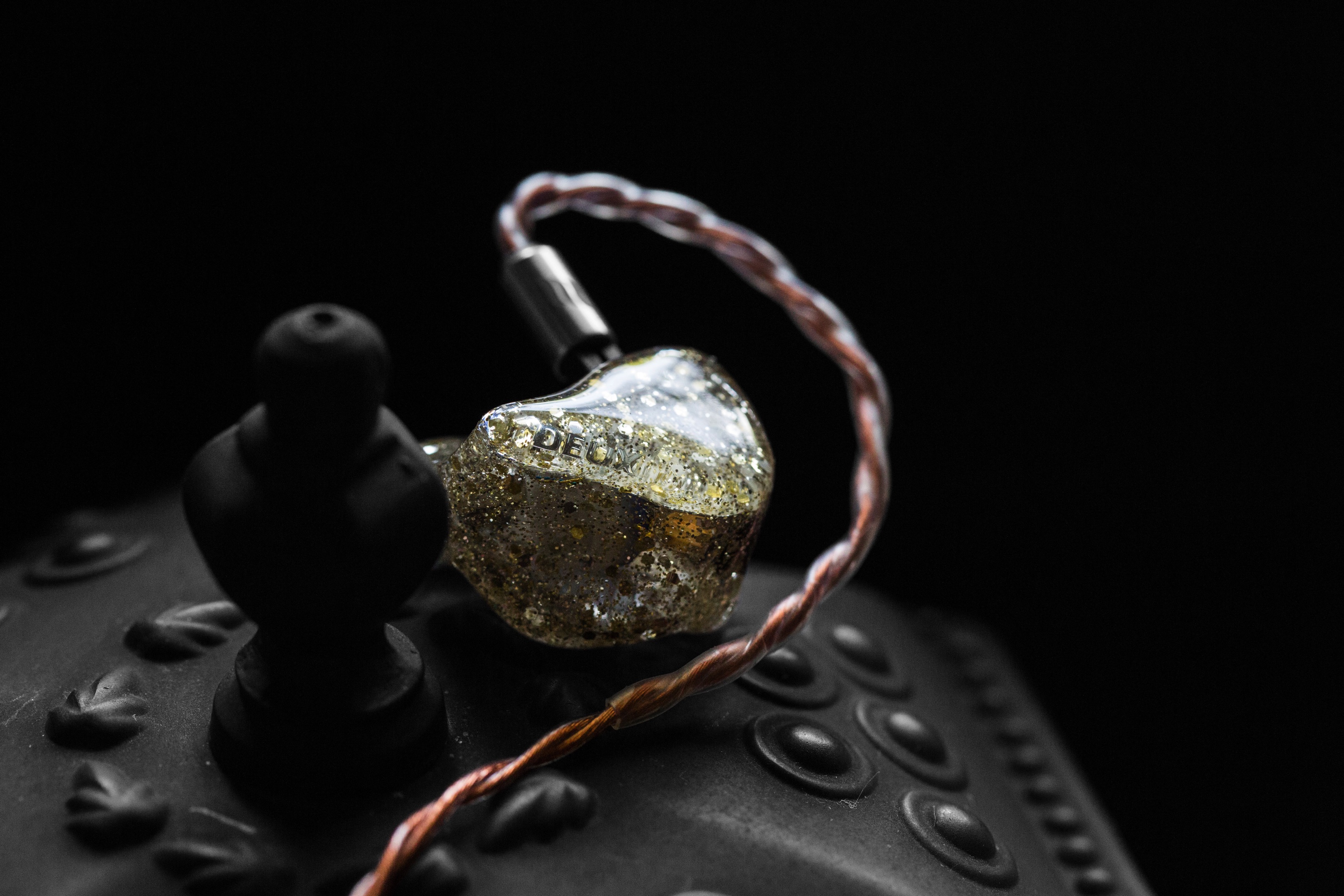 The Déux delivers a warm, laid-back signature hallmarked by a fat mid-bass and a relaxed treble. Unlike most hybrids with this configuration – like the Empire Ears Bravado or the AAW A2H – the Déux shies away from dynamism in favour of a richer, more forgiving presentation; ideal for longer listening or for sensitive ears. Although this may suggest a lack of detail or excitement, the Déux compensates through stage reproduction. Background blackness and image stability both impress despite okay treble extension. So, the weighty, full-bodied instruments have a strong foundation to stand on. Expansion is a hair above average, but it fills headspace with ease – stereo separation: fair, headroom: sufficient. 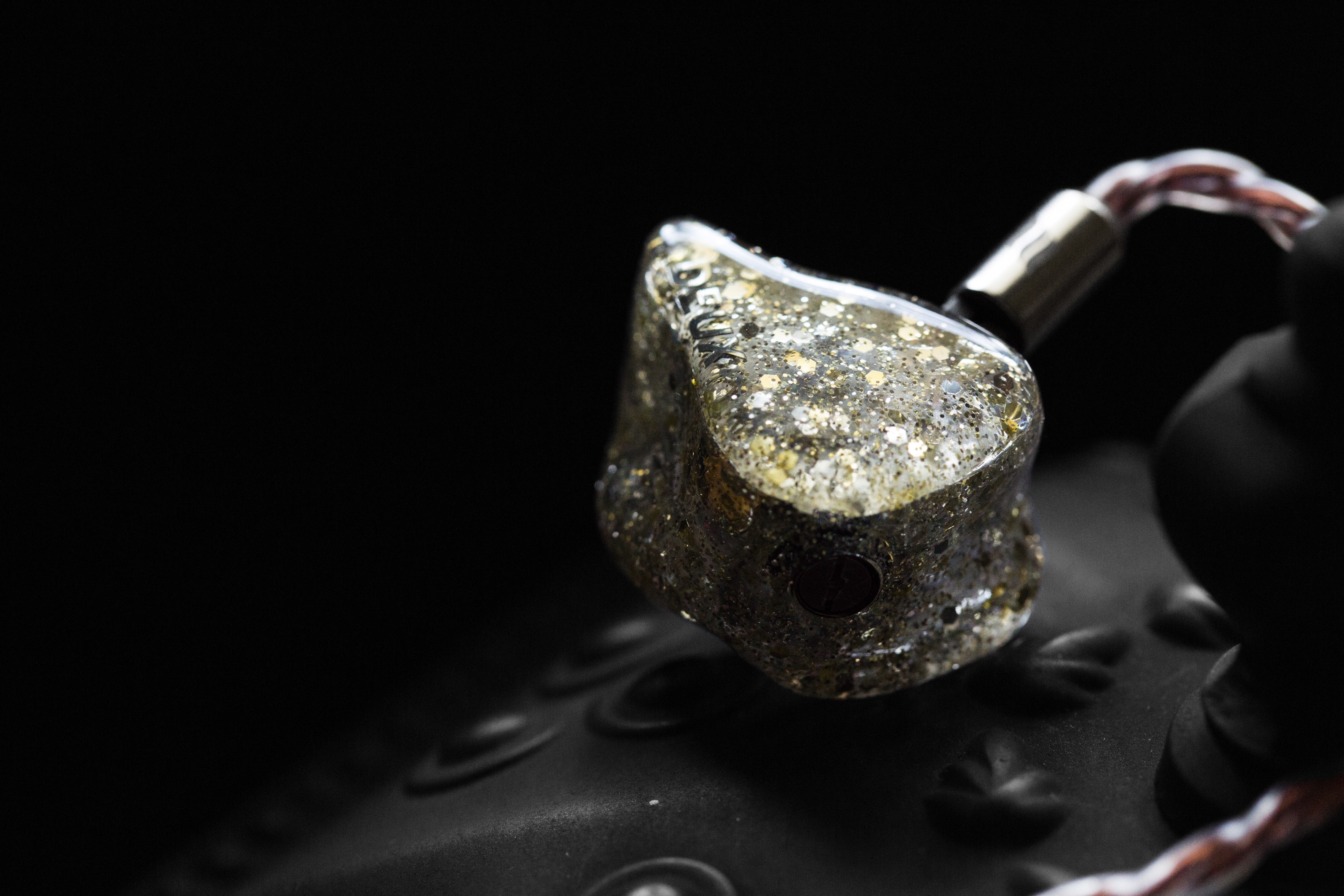 The Déux’s instruments carry a warm tinge due to the in-ear’s thick, buttery low-end. Even with the Balanced filter, low-end impact just inches above everything else. Once again, the soundscape remains stable, clean and roomy thanks to CSU, but the elements within it are noticeably harmonic and rich. This isn’t ideal for utmost definition, but it’s vital for the in-ear’s chill, relaxing vibe. Slow electric guitars like the ones on Mark Lettieri’s Slant sound thick, smooth and gorgeously melodic. The warmer tones complement the instrument’s clean amplification, flaunting the sweet harmonies the guitars produce together, rather than emphasising the minutia – like string plucks – or clinical separation for analysis’ sake.

The Déux’s single diaphragm supplies a rich, impactful low-end – pumping air like an analog piston. But, the key word here is analog. The Déux concerns itself less with sheer dynamic impact: Its delivery is slower, warm and lush. So rather than any sort of EDM, it’s most at home with crooner blues like Elvin Bishop’s Fooled Around and Fell in Love or guitar-driven jazz like Mark Lettieri’s Montreal. It won’t necessarily deliver the raw adrenaline a basshead would expect (not with the Balanced filter, at least). But, what it will deliver is a pleasingly sweet tone. Kick drums, cellos and pianos all resonate with the same weighty, harmonic quality, coalesced by a euphonic decay. The charm here truly is warmth and timbre.

Additionally, the bass is admirable technically too. Despite its warmth, sufficient control preserves resolution, layering and speed. With saturated pop tracks like Charlie Puth’s Attention, the kick drum and bass line remain well-segregated from one another. Extension is strong, but there’s a definite bias towards the mid- and upper-bass. This is where the meat and melody come from. The sub-bass is more foundational in nature, but solid nonetheless. Texture and definition are where the Déux falls short. Because of the richer tilt, the bass comes across less rumbly and detailed than – say – Empire Ears’ hybrids. But, this was ultimately by design, resulting in a presentation tubeheads will most likely prefer.

The Déux maintains a well-structured midrange driven by a linear rise spanning 1-4kHz. The lower-mids remain neutral, aiding definition and contrast in place of the upper-treble. But because the region sits in line with the low-end, harmonic content is always present; constantly fed by the richness of the mid-bass. Notes are thick and fat, but never come across congested thanks to the stage’s genuine sense of depth. The background is rock-solid and instruments are physically-sound, so resolution persists. But with that said, clarity and transparency aren’t the Déux’s strongest suits. Micro-details may come across smoothed over, so the soundscape is certainly more musically coalesced than clinically separated. 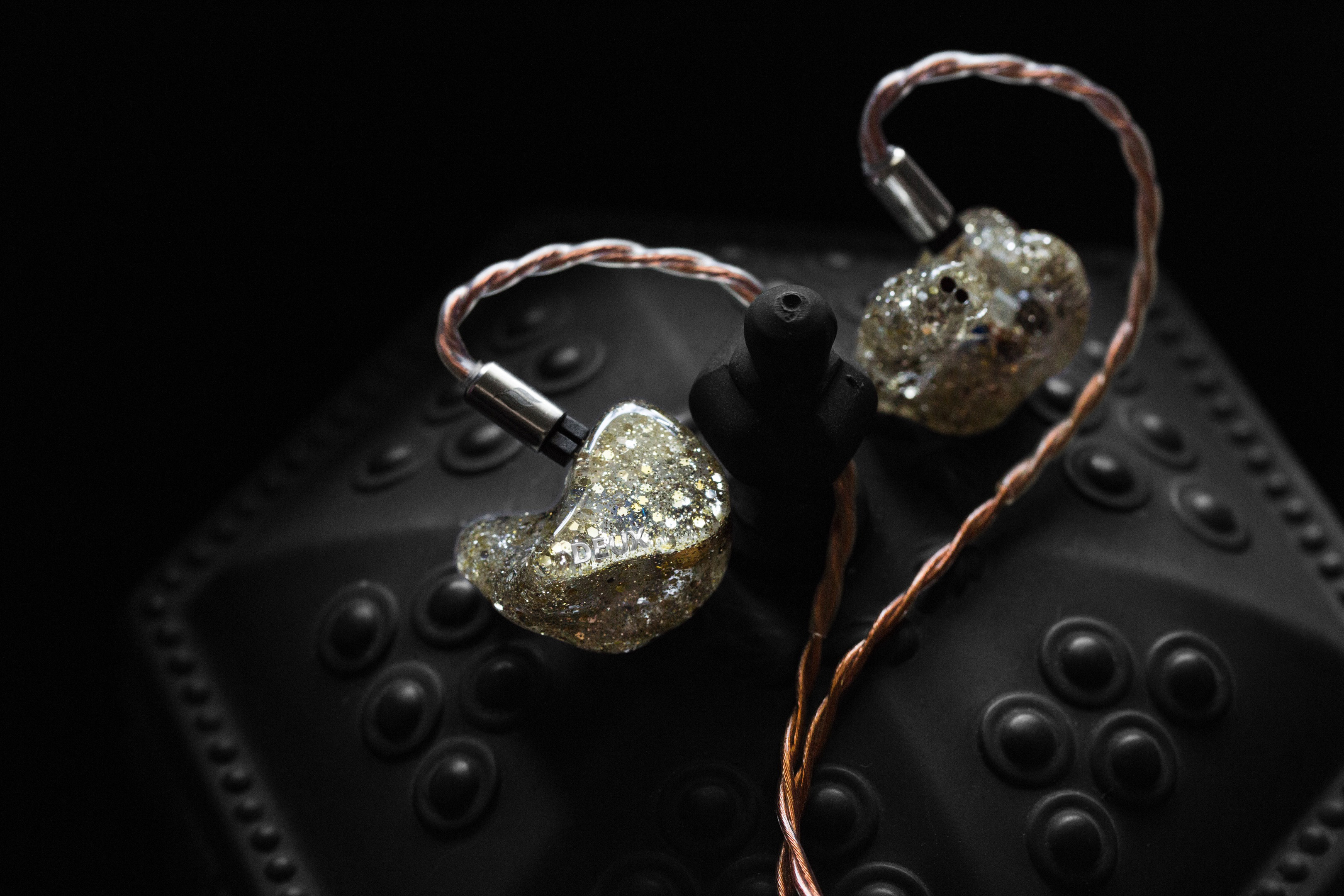 The Déux takes advantage of a 6-7kHz peak for articulation – crucial for preventing genres like pop, EDM and rock from sounding overtly saturated. When taken together with its inherent warmth, the Déux straddles the line well between separation and cohesion. The multi-part guitar harmonies in Mark Lettieri’s Slant come together with great musicality. But at the same time, the individual tracks are well-defined too. More transparency would be required for proper mixing work, but it performs impressively at its price range nonetheless. Though, higher-pitched instruments tend to sound more weighty and rich than sweet. Female vocalists and flutes may sound chestier, for example. Whether or not this is a good thing will vary by preference, but it’s worth noting for purists who prefer their instruments sounding a certain way.

Up top is where the Déux will probably be most divisive. Peaks in the lower- and middle-treble add tizz before roll-off. This calmness in the upper-treble reaffirms the Déux’s more laid-back presentation. The resultant response is articulate, but not the most open or airy-sounding. Many will cite a lack of sharpness, contrast and clarity; especially fans of pop, rock or EDM (who happen to be the target demographic for hybrids like these). But, this is ideal for those who prefer longer listening. Melodic genres like slow rock or ambient jazz sing with little compromise to detail. Additionally, the treble takes on a calmer, warmer timbre – imbuing it with organicity whilst maintaining decent transient attack.

Extension is admirable for an in-ear at this price. There isn’t much air past 10kHz, which adversely affects the Deux’s transparency. But, the stability of its image is upheld by CSU technology. Spatial precision along all three axes is strong. Stereo separation is commendable, as well as a genuine sense of height – especially when listening to cymbals and chimes. Despite what should be middling performance here, Jomo Audio’s efforts in time and phase have served them dividends in the Déux. Another aspect of note here is speed. Treble notes touch-and-go very swiftly. This adds sufficient dynamics despite the top-end’s calmness, and rids it of any bright overtones – confirming its warm, feather-y timbre. 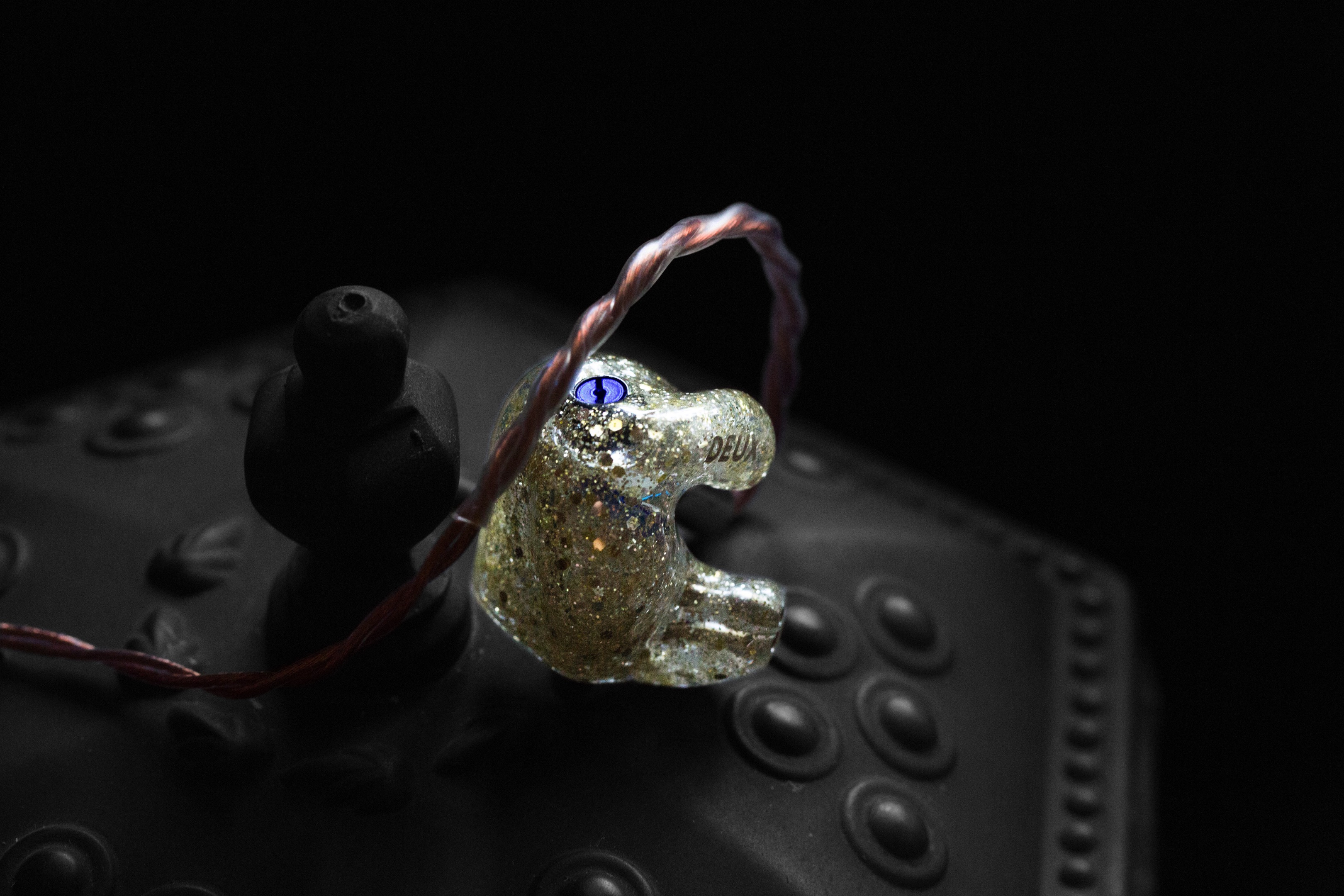 The blue ACU filter adds palpable energy to the mid-bass; inching close towards the sub-bass. The emphasis lies around 100-200Hz, so aspects like rumble and bloom are altered most. Warmth remains largely unaffected. Instruments and vocals gain a bit weight and authority – lower-pitched ones earn presence too – but they don’t shift much in tone or timbre. Upright basses in jazz music sound lovely with the added gusto, while genres like pop and R&B become more rhythmically exciting. However, busier arrangements in the latter category may end up sounding too saturated or full.

The red ACU filter applies a similar boost as the blue filter, but to a greater degree. Perhaps the emphasis is closer to the sub-bass, but it’s too close to tell. Sub-bass rumble now takes centre-stage with the lead melody, delivering the levels that bassheads will most likely prefer. Sub-bass texture and definition are more apparent now as well. The low-end is more guttural, physical and forceful, but there’s a slight trade-off in headroom. Vocals have less space to resonate, but if the music you listen to is predominantly electronic and/or loudly arranged, this shouldn’t be too much of a compromise. 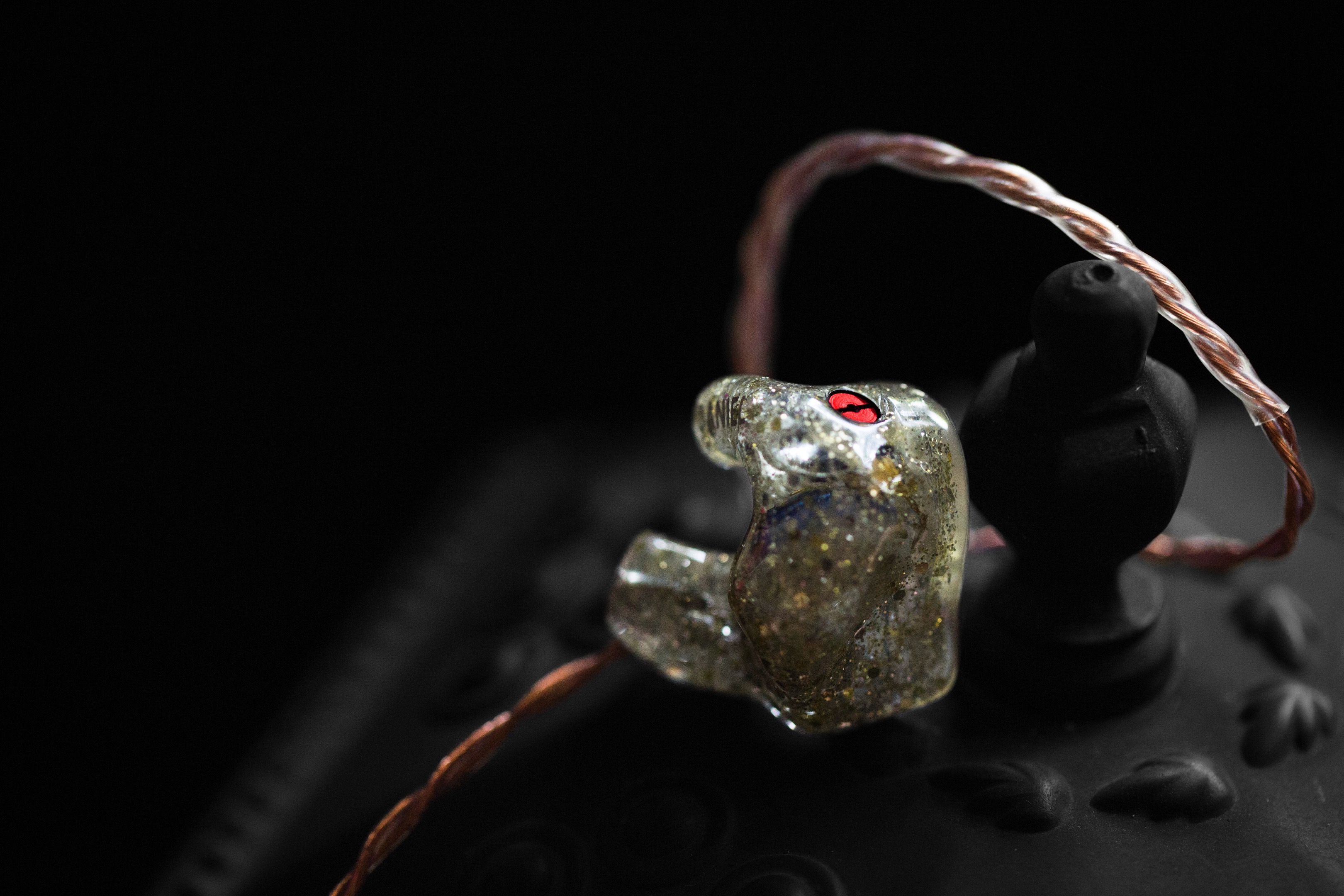 Despite my musings about nomenclature at the beginning of the review, I must say – Musical is the most apt term to describe the silver ACU filter. Its emphasis lies closer towards the mid- and upper-bass, which boosts the melodiousness of the low-end. The region now has a clearer tone and a more melodic characteristic. The note of the bass is now the star rather than warmth or impact. This is ideal when listening to jazz, but it’s beautiful with pop music too. It adds another dimension to the low-end as a melodic instrument in its own right – rather than just the foundation or the rhythmic drive – which adds to the (you guessed it) musicality of the whole number. It’s quickly become my favourite of the bunch.

Filterless, the Déux’s mid-bass is at its calmest. A sub-bass bias results in a drier, rumbly response. Subsequently, its stage is cleanest too. Note definition receives a small boost, but no appreciable gains are made in resolution or transparency. Vocals are now notably emphasised around 2-3kHz, resulting in a chestier, more saturated presentation. So, if you’re looking for increased vocal focus and decreased mid-bass energy, this is the ideal configuration for you.

The Déux has an agreeable signature that’s more versatile the more you prefer longer listening. But, it does have several tonal and textural hallmarks that make it an excellent piece no matter the scenario. Here are three of them below:

Smooth, rich warmth with a DD-fuelled bass: The Déux maintains a rich, forgiving profile because of its laid-back top-end. But, its body and heft certainly stem from the bass. The Déux low-end delivers both the impact of a dynamic driver, as well as the euphony from its decay. If your tastes lie in slow rock and ambient genres, the Déux is first-choice worthy.

Considerable imaging and stereo separation in a non-fatiguing response: With slower, warmer in-ears, imaging precision and layering tend to get compromised. However, thanks to Jomo Audio’s considerable efforts in time and phase, the Déux maintains a sufficiently black background and a stable image. So, this means enthusiasts of the aforementioned genres won’t sacrifice too much technical performance to achieve a pleasing tone. You get the most of both worlds.

Customisable low-end response: Through ACU technology, Jomo Audio allows you to determine how you want your low-end delivered. Although the mechanism they have in place isn’t the simplest to use – requiring a tool and very steady hands to operate – it does open up the Déux for proper use with a wide variety of genres. This is ideal if the Déux’s generally warm profile fits your preferences already, but you have tons of genres in your playlist with differing needs. 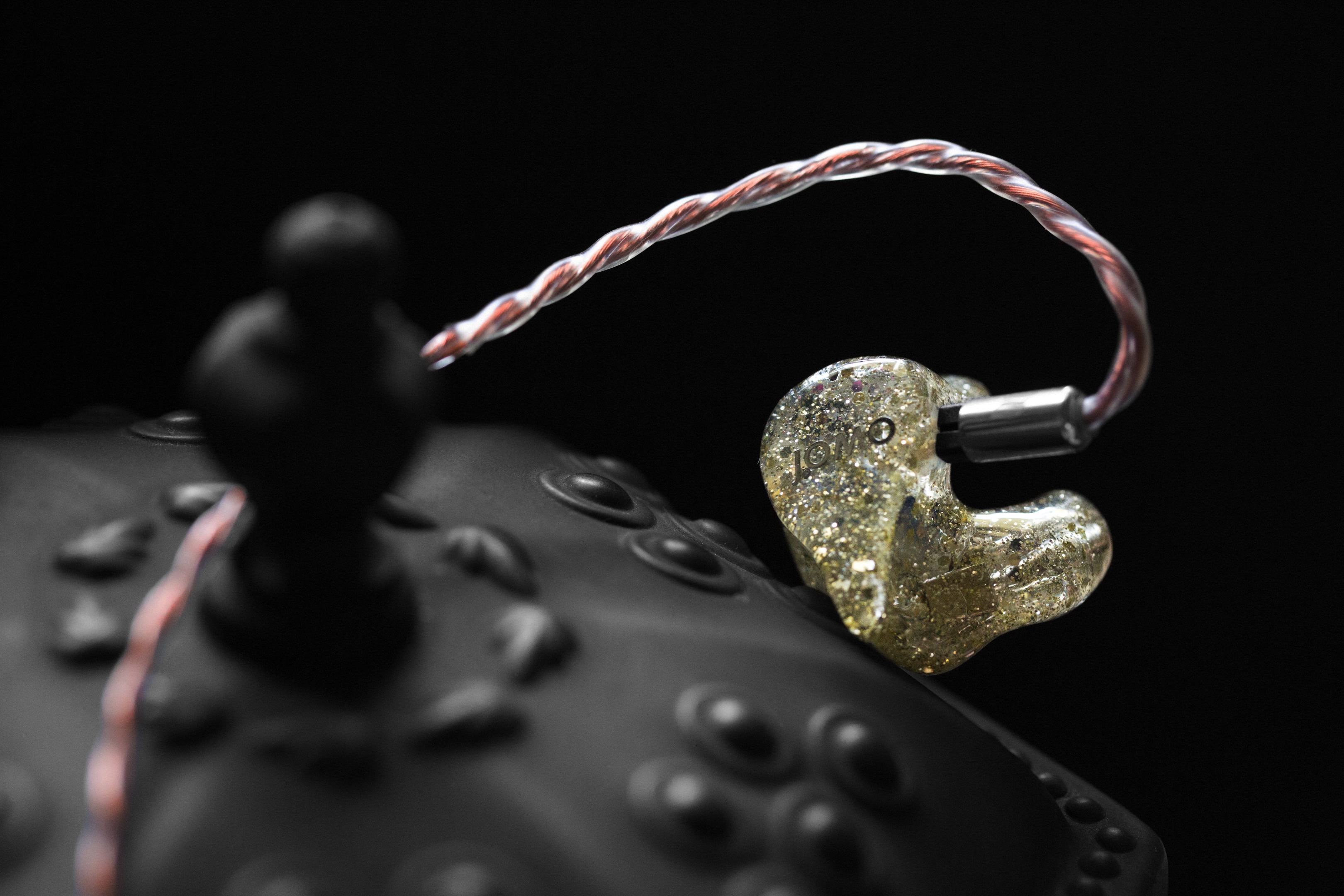 But, the Déux’s warmer tilt and calmer top-end may render it less favourable to many as well. If the following three scenarios align well with your preferences, you’d be better off looking elsewhere for your hybrid monitor of choice:

Top-end sparkle, clarity and micro-detail retrieval: The Déux’s treble is reserved in both quantity and extension. Again, it’s a predominantly warm and lush in-ear. Hi-fi enthusiasts will most likely find clarity, sharpness and air all insufficient. If openness and detail-led transparency are what you strive for, Jomo Audio’s Pro-Audio line will better fit your needs.

A vocal-emphasised presentation: The Déux has a thick, saturated vocal range. But, diehards of vocal-oriented music may find it lacking in transparency and detail. Additionally, they may find the low-end a touch too prominent relative to the midrange. If you have a preference for vocals and also long for a DD bass to go with it, the Quatré is a superior choice.

A dry, purely rumble-focused low-end: Unlike most modern hybrid offerings, the Déux’s low-end is warmer and thicker than guttural and rumble-y. There’s a bias towards the mid-bass that favours rock and jazz more than it favours EDM and dance music. If you prefer a more woofer-like low-end, Empire Ears’ and 64Audio’s hybrids will make better options.