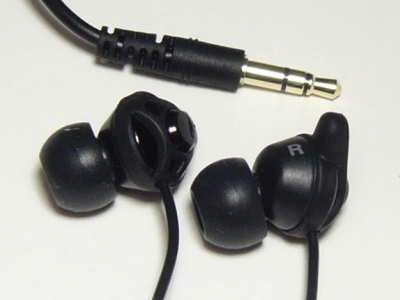 Accessories (2/5) – Single-flange silicone tips (3 sizes), foam tips, and shirt clip
Build Quality (3/5) – The housings are mostly plastic, with paper nozzle filters and no strain reliefs on cable entry. The cables are thinner compared to higher-end JVC IEMs but still soft and flexible. The 3.5mm I-plug is nicely relieved
Isolation (2.5/5) – Good for a shallow-fit earphone
Microphonics (4.5/5) – Low in the soft and flexible cable
Comfort (3/5) – The housings are small and ergonomic except for the plastic stabilizing arm shooting off the side of the housing, which can push against the ear and cause soreness after a while. They can be worn over-the-ear, with the stabilizer pointing outward, for better comfort

Sound (7.2/10) – The HA-FX40 is built around an 8.5mm carbon nanotube driver, the first such transducer available in the US. Billed as the ‘high clarity’ model in JVC’s extensive earphone lineup, the FX40 follows a v-shaped sound signature with strong bass and even stronger treble. It certainly delivers the clarity, but does so at a cost.

The carbon nanotube drivers found at the heart of the FX40 are most impressive in the bass region – the bass is definitely enhanced but far from overbearing. It lacks the absolute extension of sets such as the VSonic GR99 and Philips SHE3580 but still digs plenty deep without jeopardizing control. The treble-heavy nature of the earphones can diminish the relative emphasis placed on the low end but the bass of the FX40 is not to be underestimated – it is quick and impactful, forming a solid backbone for the sound.

Bass bleed is quite low – the Philips SHE 3580 and Brainwavz Beta, two competing v-shaped IEMs, have stronger upper bass response and sound warmer than the FX40. The JVCs are recessed through much of the midrange, though the response picks up towards the upper mids. Vocals, especially male vocals, are too far back in the mix on many tracks. High levels of clarity and detail are probably the most impressive aspect of the mids, though some of the perceived clarity comes from emphasis in the upper midrange and treble. This effect is similar to using a treble booster EQ setting (e.g. BBE’s “Crystal Clear” preset) and highly reminiscent of the far pricier PureSound ClarityOne earphones.

The resolution of the FX40 is still very good but there is another similarity to the PureSound Clarity One – the note presentation is on the thin side. The Philips SHE3580 and id America Spark, for example, both give up a bit of resolution to the FX40 but have a thicker, more fleshed-out note. While both of these earphones also sound colored, their note presentation seems a bit more natural than that of the FX40. The treble of the FX40 is emphasized overall and not entirely smooth but it is not as harsh or sibilant as one may expect from an earphone with enhanced treble response – a little splashy and fatiguing over long listening sessions, but generally tame. The tone is on the bright side, with plenty of energy and a tendency to emphasize cymbal crashes and the initial ‘crack’ of drums. The result of all this coloration, combined with the thinner note presentation, is that the fidelity of the FX40 can swing widely from great to poor depending on track.

Similarly, there are some issues with the presentation – while the FX40 tends to sound nice and open, the high left-right separation is reminiscent of Sony’s higher-end EX-series earphones and the Monoprice 8320 in providing little in the way of a central image. Depth and layering leave some to be desired as well, especially compared to JVC’s higher-end FXT90 model. On the upside, separation is good and there isn’t any of the boomy, closed-in feel that can be such a deal breaker with certain low-end IEMs.

Value (9/10) – JVC’s entry-level clarity-oriented model delivers exactly what it promises – a bright, clarity-oriented signature that doesn’t sacrifice the one must-have trait of a successful entry-level earphone – solid bass. The form factor leaves a little to be desired and the sound signature won’t work for everyone but the FX40 is one of the better treble-heavy earphones in the lower price tiers.