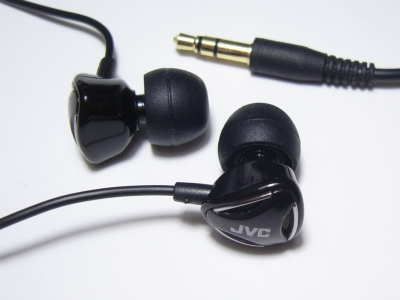 Accessories (4/5) – Single flange silicone tips (3 sizes), over-the-ear cable guides, and oval hard clamshell carrying case
Build Quality (4/5) – The carbon housings feature the usual touch of solidity higher-end JVC products share. The metal accents and mesh-covered vents look quite good and the nozzle holds the carbon microdriver. Cabling is typical JVC as well – average in thickness but very soft and flexible and terminated with the usual straight plug
Isolation (3/5) – Quite good despite large rear vents
Microphonics (4/5) – Low when worn cord-down, nonexistent with the cord worn over-the-ear
Comfort (3/5) – As with the other earphones containing JVC’s dynamic microdriver, the transducer of the FXC80 sits in the nozzle of the earphone. The housing shape is therefore not dictated by driver size or design. Though the odd pyramidal housings JVC chose are rather lightweight and can easily be worn cord-up or cord-down, the shape rules them out for smaller ears, at least with the stock tips. A conventional straight-barrel design would’ve actually been more ear-friendly

Sound (6.5/10) – The sound of the HA-FXC80 is an evolutionary step up from the signature of the older FXC50. The 5.8mm “Micro HD” transducer is capable of extraordinary clarity and detail, which seem to be the driving forces behind the FXC80’s signature. The bass is very tight but surprisingly well-layered and full. The FXC80s are definitely not bass-heavy earphones but they have solid impact and a surprising amount of air at the low end. There is no mid-range bleed and the mids, while slightly underemphasized, are very smooth, clear, and detailed. They could stand to be a bit thicker next to the forward treble but remain very enjoyable nonetheless. Overall balance, while treble-leaning, is definitely impressive. The treble is crisp, bright, and carries an immense amount of sparkle. Despite this, the JVCs are mostly free of harshness or sibilance and lack the top-end extension of some of the pricier treble-focused earphones.

In terms of presentation, the JVCs are far from spacious – the soundstage is average in size – bigger than that of the FXC50 but not up there with the ViSang R03 or even Meelec M6. Instrumental separation is decent but the vast amount of treble detail, aggressive nature of the top end, and relative lack of air up top make them somewhat congested nonetheless. I really can’t think of a better way to describe the treble of the FXC80 than to call it ‘concentrated’ – the JVC HA-FXC80 has very concentrated treble. Combined with the class-leading clarity and detail afforded by the micro HD drivers, this makes listening to the FXC80 is a remarkably intense experience. I can’t say that the FXC80 is necessarily hotter up top than something like the ATH-CK10 but the much pricier Audio-Technicas are so much more spacious and resolving that the experience is richer for it. The JVCs have a stronger tendency to fatigue, though earphones with the opposite skew (monster bass, average treble) tire me out even quicker.

Value (7.5/10) – The JVC HA-FXC80 is to the older HA-FXC50 what the Meelectronics M6 is to the M9 – a more refined sound with the same general signature and better all-around usability. The FXC80 really is quite good for the money – it is well-built, isolating, and not particularly microphonic – but the bell-like clarity and brightness will not appeal to everyone. This is an earphone for those who truly like their treble – a good upgrade to the FXC50 or Head-Direct RE2 without dropping the $80 on an RE0 or importing a RadioPaq Classical. Taken as such, the FXC80 is another competitive product from JVC’s audio division, but one potentially limited to a niche target audience in the hi-fi crowd.