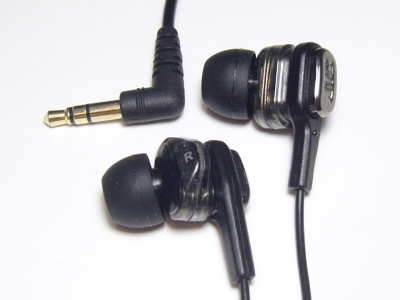 Accessories (4/5) – Single-flange silicone tips (3 sizes), shirt clip, cable winder, and clamshell carrying case
Build Quality (4.5/5) – The plastic housings of the FXT90 may be rather ordinary-looking compared to the metal FX300 and wooden FX500/FX700 shells but it feels very well put together, in typical JVC fashion. The strain reliefs are long and the L-plug is beefy. The cord itself is reasonably thick, soft, flexible, and – best of all – not modular as it is with JVC’s FX500/FX700 models
Isolation (3/5) – Quite good with the ergonomic but shallow-fitting shells
Microphonics (4.5/5) – Very low when worn cable-down; nonexistent with over-the-ear wear
Comfort (4/5) – Despite the vertical arrangement of the dual dynamic drivers, the FXT90 is no less comfortable than most conventional straight-barrel IEMs. The ergonomic nozzle angle helps, as do the smooth surface and rounded edges of the housings. Over-the-ear wear is possible but may require longer eartips than those provided

Sound (8.9/10) – The FXT90 is JVC’s first attempt at a dual-dynamic earphone. Utilizing no crossover, the FXT90 relies on the differences between the materials of the two drivers to create a natural variance in their response. Like Fischer Audio’s similarly-priced Tandem, the FXT90 positions the drivers vertically in the ear. Unlike the Tandem, it offers up impressive presence across the frequency range without straying too far from the sound of JVC’s higher-end wooden in-ears.

The low end of the FXT90s is strong but not overly dominant, with a mild mid-bass hump and excellent note thickness – similar in quantity to the Sennheiser IE7, but quicker and more controlled. Impact is good and the bass sounds full and fleshed-out. Compared to JVC’s FX500, the bass of the FXT90 is less prone to overshadowing the midrange, partly because the note presentation is thicker in the midrange and partly because the FXT90 exercises better control over its bottom end. The bass may not be as fast and tight as that of the VSonic’s GR07, but it is more forward and has both greater body and more impact. The GR07 boasts shorter decay times and tends to be quick and punchy, but not as powerful in comparison. Fischer’s dual-dynamic Tandem, too, is flatter through the bass and midrange but yields to the FXT90 in both bass impact and depth.

The midrange of the FXT90 is strong and prominent – not as forward as the mids of the Sennheiser IE7 or Fischer SBA-03, but not in the least laid-back. The good note thickness of the low end is retained, as is a bit of warmth. Despite the presentation being airy and nicely layered, the mids tend towards intimacy. They are smooth and full, with excellent timbre and good transparency. Clarity is good – better than with the Sennheiser IE7 and Fischer Audio Tandem but not quite as impressive as with the more neutral-sounding GR07 or the armature-based ACS T15. Detail levels are nearly on-par with the GR07.

At the top end, the FXT90 is again prominent, yet very competent. The mild emphasis tends to point out and even exaggerate sibilance present on a track but the edginess of the FX500 is all but absent. The energy is still there, however, as it is with all of the higher-end JVC in-ears I’ve heard. Compared to the similarly-priced FA Tandem, the FXT90 is significantly brighter and more sparkly but – luckily – has quality to make the treble work. Treble detail is excellent and the resolution and transparency give the GR07 a run for its money. In comparison, the similarly-priced PureSound ClartyOne lacks separation and sounds both thinner and peakier while the Sennheiser IE7 sounds plasticky and lacks smoothness. Absolute extension at the top is decent but trails both the ClarityOne and the IE7 slightly.

Presentation is yet another strength of the FXT90 – the earphones are airy, well-separated, and nicely layered. Soundstage width is about average but the depth is quite good. Compared to the GR07, the FTX90 sounds narrower and less spacious but has slightly better imaging. Its presentation is more intimate compared to the GR07 and Tandem and more well-rounded than those of the similarly-priced ClarityOne and Fischer SBA-03. Dynamics are good and the efficiency is very impressive. That’s not to say there’s no upgrading from the FXT90 – there is a noticeable gap in detail, refinement, and soundstaging when moving to a higher-end set like the HiFiMan RE272, but for the asking price the FXT90 is a very impressive all-around performer.

Value (9/10) – The JVC FXT90 is not the first dual-dynamic earphone to hit the market, but it may just be the first one you’ll actually want to live with. From a usability standpoint it is clearly the best of the bunch, foregoing not only the awkward fit and questionable design of the dual-dynamic competition but also the modular cable and open-back housings of the other high-end JVC monitors. The sound of the FXT90 is balanced in an aggressive sort of way, with the intimate midrange giving up only a bit of emphasis to the prominent bass and sparkly treble. The sound is strengthened by good timbre and a nicely layered presentation – the same qualities that make the FX700 a cream-of-the-crop top-tier. Simply put, the FXT90 is one of the best deals in portable audio.