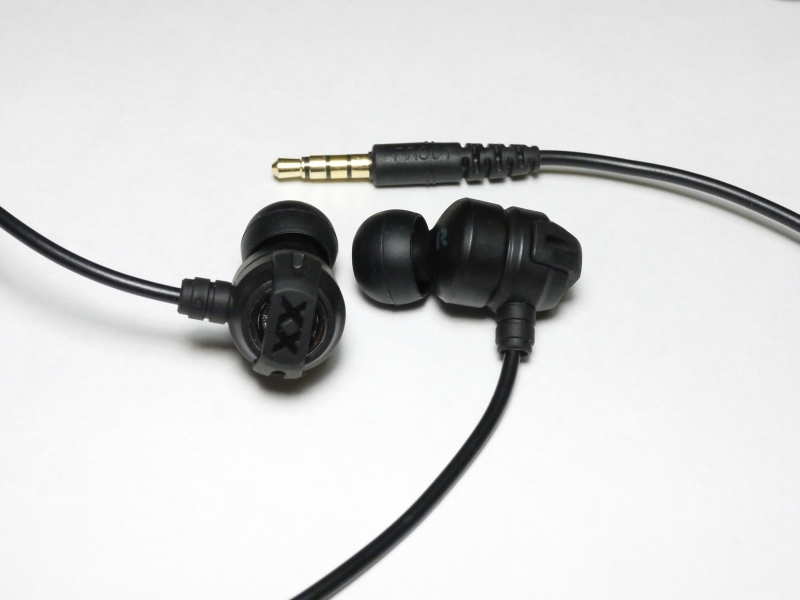 Accessories (3/5) – Single-flange silicone tips (3 sizes) and plastic carrying case
Build Quality (4/5) – The HA-FR301 is built like the other Xtreme Xplosives models and features plastic housings with rubber bumpers, paper nozzle filters, and the usual PVC cable. The cord lacks a sliding cinch and terminates with a well-relieved I-plug. A 1-button remote with mic is positioned at the y-split. On the back of the remote is a switch that toggles between the two common headset wiring configurations – CTIA and OMTP – which differ in where the microphone and ground leads are on the plug. A few other IEMs do this with adapter cables, but a switch is a much neater solution. There aren’t many OMTP phones in the US these days, but this feature does add flexibility for users of some older and/or imported devices
Isolation (3/5) – Good for an earphone of this type
Microphonics (5/5) – Pretty much nonexistent
Comfort (4/5) – The fit is similar to the other XX models – the tubby housings with their rubber bumpers may be a little large for over-the-ear fitment in smaller ears but cord-down wear is very comfortable thanks to the steeply angled nozzles

Sound (6.8/10) – JVC’s Xtreme Xplosives line has always been known for abundant bass, and the HA-FR301 model is no exception – it is the bassiest earphone I’ve heard all year and follows a very pronounced “v-shaped” sound signature with powerful lows and highs.

A prominent mid-bass hump gives the FR301 its enormous impact, which easily beat all of the sets I compared it to, from the VSonic GR02 Bass Edition to the Nuforce NE-700X, in quantity. Extension is great, too, though the sub-bass is not the focus here.

As is usually the case with earphones that have emphasized mid-bass, the low end of the FR301 sounds somewhat boomy. However, the midrange is not thick, which helps the earphones maintain excellent clarity. That’s not to say the mids aren’t noticeably recessed – they are – but thanks to a relatively lean note presentation and plenty of presence in the upper midrange and lower treble, clarity is pretty good, lagging just behind the more balanced VSonic GR02 BE and beating sets such as the Nuforce NE-700X and Fidue A31s. The bass does still bleed up, but not as much as can be expected give the sheer amount present.

The FR301 is a v-shaped earphone, and like many it can sound pretty harsh up top. This is especially noticeable on cymbal hits, which tend to be overly energetic and quite splashy. Sibilance, however, is not bad at all – better than with the VSonic GR02 BE, for instance. The presentation, likewise, can get a touch congested when the heavy bass steps in but is otherwise quite well-rounded. The v-shaped sound sig is an advantage here and keeps the soundstage size above average, whereas bass-heavy earphones with prominent mids and laid-back treble tend to sound more thick and congested.

Note: I could have included more head-to-head comparisons but they all came out pretty much the same – compared to the other sub-$50 bass-heavy earphones in my collection, which tend to be either full-bodied and smooth or v-shaped with a low end bias, the FR301 invariably sounds bassier, clearer but more recessed in the midrange, and harsher up top.

The Twinwoofers are bass-heavy but rather smooth-sounding earphones – a contrast to the significantly v-shaped JVC HA-FR301. In comparison to the Twinwoofers, the low end of the JVCs is more powerful, the mids are much more recessed and not as full-bodied, though also clearer, and the top end is harsher. The warm and smooth Twinwoofers are perhaps more natural tonally, but also quite muddy-sounding in comparison. Overall they are two very different takes on bass-heavy sound; which is better really depends on what the bigger dealbreaker is – lack of clarity or harsh highs.

Brainwavz’ S1 model is similar to the FR301 in the general sense of being v-shaped and bass-heavy, but the greater mid-bass power of the FR301 affects its overall sound quite a bit. The S1 is very capable of producing deep, powerful bass but still falls significantly short of the FR301 in sheer slam. The low end of the S1 is tighter, as expected considering the quantity difference. The mids are a little more detailed and nuanced with less bass to get in the way, and the top end is not as harsh as that of the FR301.

The latest version of the Beats by Dre Tour is not exactly a top performer in its price bracket, but the warm and smooth sound holds its own against other basshead earphones. Indeed, the Tour 2.0 was probably the closest to the JVC HA-FR301 in bass quantity out of everything I tried. The FR301 is still a touch more impactful, and overall more v-shaped with significantly brighter treble. It sounds harsher, but also quite a bit clearer than the somewhat muffled Beats.

I found that both sound best with music that relies on bass and is sparsely instrumental, such as Hip-Hop and EDM. This tends to mask the shortcomings with the clarity of the Beats, the harsh treble and recessed mids of the FR301, and the overpowering bass of both. With complex tracks the smoother sound of the Tour 2.0 pulls ahead slightly.

Value (8/10) – The JVC Xtreme Xplosives HA-FR301 is an earphone for bassheads, pure and simple. Its v-shaped sound signature keeps muddiness to a minimum and maintains impressive clarity for such a bassy earphone, though it is not without drawbacks. Still, considering the solid build quality, amazingly quiet cable, and remote with a universal smartphone switch, I expect I’ll be recommending these often to bass lovers all over the world.