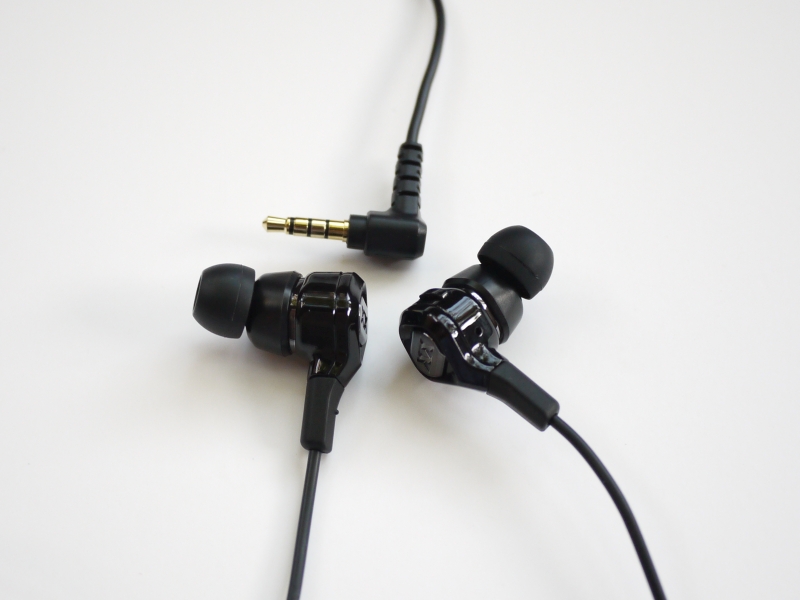 Accessories (2.5/5) – Single-flange silicone tips (3 sizes) and velvet carrying pouch
Build Quality (4/5) – The FR100X foregoes the rubber bumpers of JVC’s previous XX-series models for an all-plastic construction. The housings are large but lightweight and JVC’s usual low-noise PVC cable is now terminated with a very nice L-shaped plug. Unusually, the microphone element and remote button are built into the right earpiece. This works quite well, thanks in part to the size of the earpiece – I actually had an easier time locating the button quickly compared to cord-mounted remotes
Isolation (3/5) – Good for an earphone of this type
Microphonics (5/5) – Pretty much nonexistent
Comfort (3.5/5) – The XX Elation utilizes the usual angled-nozzle design of JVC’s previous XX-series earphones but the large housings with the somewhat unusual rhomboid cross-section just aren’t as comfortable in the ear as, for instance, the smaller HA-FX101

Sound (7.2/10) – The XX Elation line is the latest in JVC’s long-running Xtreme Xplosives series of bass-heavy (and sometimes extremely bass-heavy) headphones and earphones. The HA-FR100X is the in-ear XX Elation mode and has both wired and wireless on-ear counterparts.

The sound of the HA-FR100X is a clear improvement over the XX earphones of old such as the HA-FR301 I reviewed last year. That earphone was overwhelmingly boosted in the bass and treble regions, which made its sound very uniquely suited to a particular type of listener but also had many drawbacks.

The new HA-FR100X sacrifices a portion of that huge bass, as well as some of the treble brightness, for a more balanced and natural sound tuning. It still carries very good bass impact that will be plentiful for the majority of listeners. However, it is no longer true basshead earphone in my book – the bass is simply not that overwhelming.

The FR100X has a warm tone and v-shaped overall sound signature – just not as v-shaped as the preceding HA-FR301 model. The sound is heavy on mid-bass, which causes the sub-bass to appear more subdued compared to earphones with similar bass quantity but less mid-bass bias – earphones such as the Nuforce NE-600X, Popclik String, UBSOUND Fighter, and Brainwavz S1. The bass is also a little less tight and more boomy, compared especially to the String and S1, but more controlled than that of the similarly mid-bassy Tekfusion Twinwoofers.

The FR100X’s mid-bassy sound creates a midrange that is fairly full-bodied despite the v-shaped response of the earphones. Compared to leaner-sounding sets like the aforementioned Popclik String and Brainwavz S1, the HA-FR100X is more veiled, but also richer and less recessed in the midrange. It goes both ways, however, as the JVCs are also clearer compared to less v-shaped earphones such as the UBSOUND Fighter and Twinwoofers.

Moving on up, the FR100X is slightly prone to harshness, much like other v-shaped earphones in its price range including the Brainwavz S1. Treble energy is good – the FR100X is brighter and more natural in this regard than the somewhat dull-sounding Twinwoofers, though also not as smooth. The treble presence and overall v-shaped sound signature help the FR100X sound spacious and relatively airy – definitely more so than the Twinwoofers and the pricier UBSOUND Fighter.

Below are several head-to-head comparisons between the HA-FR100X and earphones that either perform on a similar level or have somewhat analogous sound tuning (or both). These comparisons may play a direct role in someone’s purchasing decision, but more importantly they help contextualize the earphone’s performance based on the other options currently on the market.

Pitting the HA-FR100X against one of its predecessors highlights the improvements JVC has made to the overall fidelity and “sonic realism” of the XX line. The older HA-FR301 is a much, MUCH more v-shaped earphone, with both bass and treble boosted significantly compared to the HA-FR100X.

The newer XX Elation is undoubtedly the more balanced earphone. Its bass quantity may not be as well-suited for bassheads but is still plentiful for general listening and doesn’t come at the expense of severely recessed mids and unnatural, metallic-sounding treble. Thanks to its bright tone the HA-FR301 does sound mildly clearer, but the more natural treble level of the HA-FR100X makes for a better overall experience – the extra brightness and harshness of the older model just aren’t worth the clarity gain.

The HA-FR100X is smoother and more balanced compared to its predecessors but still has quite a bit of bass emphasis and sonic coloration. The ADV.SOUND M4, while still not flat/neutral, is an even more balanced take on v-shaped sound tuning. It lacks the sheer power and energy of the JVC unit, but the extra bass boost of the HA-FR100X makes it sound more muffled in comparison to the M4, especially in the midrange. The treble of the JVCs is also sharper and less natural than that of the M4 and their lows are more mid-bassy and not quite as well-controlled.

Perhaps the most well-known and least-appreciated of the bass-heavy in-ear earphones on the market, the Beats Tour 2.0 is actually a pretty solid performer. Its biggest issue is the price tag – most other bass-heavy, consumer-oriented headphones of this sort, JVC’s XX series included, come in under $100.

The Beats do have an advantage over the HA-FR100X in bass depth, as well as overall impact and power – their bass is simply more prominent. The midrange of the Beats, on the other hand, is more recessed, yet still a touch clearer compared to that of the JVCs despite the Tour 2.0’s warmer tone.

The HA-FR100X has a more prominent midrange but its sound still appears more v-shaped thanks to the brighter treble. The top end of the Beats Tours is extremely smooth and forgiving. The HA-FR100X’s is more sparkly, but also more prone to harshness. The JVC unit has a slight advantage in airiness, however, as well as a wider presentation.

Value (7.5/10) – JVC’s new XX Elation HA-FR100X earphones are much more balanced and natural-sounding than previous XX-series models. While still tuned for a bass-heavy, v-shaped sound and lacking a bit in the way of bass control, they provide a warmer, more rich-sounding midrange and more toned-down, realistic treble than the preceding model.

As a side effect of the more balanced tuning, the FR-100X does lose the extreme degree of bass emphasis that would qualify it as a basshead earphone – something JVC’s old XX-series models were well-known for. This makes the new earphone’s sound is more accurate and proficient, but less unique. It also means that the new model faces far more competition than previous Xtreme Xplosives sets. It should be just bassy enough to still do well in the mainstream market, and just well-rounded enough to be accepted by audio enthusiasts, but only time will tell with certainty.