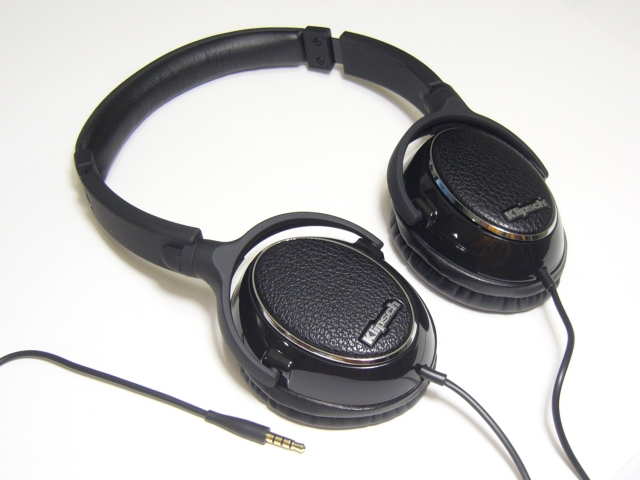 Build Quality (7/10): The Image One is a semi-circumaural headphone, with cups that will fit over some ears but not others. It is similar to the Phiaton MS400 in size and construction – mostly plastic, but with a metal inner headband. Unlike the Phiatons, the Image One is not collapsible, and yet its structure somehow feels looser and flimsier. The cabling is a bit above average in thickness but plasticky and kink-prone.

Comfort (7.5/10): The Klipschs are small and lightweight, with soft and supple padding all around. The cup size will be an issue for some – they are definitely not large enough to be considered circumaural. A larger issue is the lack of flexibility to the structure – the flat-folding cups don’t rotate far enough to conform to the ear.

Isolation (7/10): Isolation is decent but not great – the Image One is closed but the odd sizing of the cups and lack of flexibility make it a bit difficult to maintain a seal.

Sound (7/10): It is not unexpected for a company’s first headphone to sound a bit rough around the edges but I was still surprised at the word ‘bloated’ showing up in every single one of my listening impressions with the Image One. The bass of the Klipsch is boosted significantly over the midrange – so much so that I won’t hesitate to call it one of the bassiest portables I’ve heard. Subbass presence is good and overall bass power is immense – not a bad thing in and of itself, but problematic considering the result. The ever-present low end of Image One ends up sounding muddy, bloated, and unrefined. The Bowers & Wilkins P3, with its warm, punchy signature, sounds cleaner and tighter than the Image One and comes across rather well-balanced in comparison. Even the notoriously bassy Denon D1100 – admittedly a much larger headphone – maintains better clarity, a more neutral signature, and lower levels of bass bleed than the Image One. The story is the same with the Audio-Technica ES10, which has nearly as much bass punch but exponentially more control, the V-Moda M-80, the Phiaton MS300, the AKG Q460, and the Sennheiser HD428. In all cases the Image One is simply overwhelmed by its bass and lacks the finesse necessary to compete with other Hi-Fi portables.

The midrange of the Image One is recessed compared to the bass but the sonic image is pushed forward on the whole by the lack of a proper soundstage. There is a lot of bass bleed and the tone is quite warm – warmer, for example, than that of the Denon D1100. Instruments and vocals don’t sound very natural due to the exaggeration of lower frequencies and detail levels are average at best due to the lack of definition.

The recession worsens into the treble – the Image One definitely doesn’t have enough energy up top to balance out the sound. The resulting tonal slant is somewhat dark – more so than the B&W P3 and Denon D1100 – and the Image One seems grainy compared to the silky-smooth V-Moda M-80. Overall realism isn’t helped by the forward and aggressive presentation of the Image One. There’s really not much of a soundstage – both width and depth are below average in the price range and the imaging of both Denon D1100 and V-Moda M-80 sounds nothing short of holographic compared to the Klipsch. Instrument separation, too, is nothing impressive with the bass-heavy Image One.

Value (6/10): Bass of this magnitude could have set the Image One apart from most other portables if not for its sub-par quality and general obnoxiousness. Pretty much everything is thrown under the train in pursuit of bass impact, resulting in a warm and powerful – but ultimately disappointing – sound. Similarly, the construction is mediocre for the price and the fit lacks flexibility. All in all, I can see merit in the Image One if bass and portability are the only concerns. Otherwise, a Sony XB500 or AKG K81DJ would surely make a better buy.