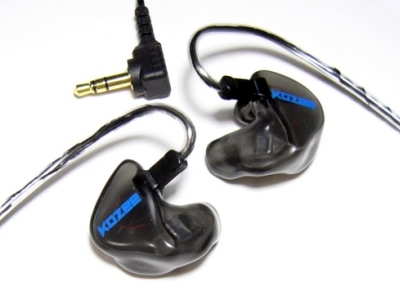 Accessories (4.5/5) – Cleaning tool, velvet carrying pouch, and hard clamshell carrying case
Build Quality (4.5/5) – Molding quality is adequate – the acrylic shells of my X1 Executive show fewer bubbles than with my 1964-T but the molds are also thinner, almost plastic-like in nature. The finish around the cable socket and nozzle bores is better than with the 1964-T but not quite up there with my UM Miracle. The matte finish is also different from the usual shiny, clear-coated acrylic of pricier customs. As for cabling, the X1 Executive utilizes a UE custom cable while the cheaper silicone-shelled X1 has fixed cabling
Isolation (4/5) – The isolation provided by the fitted acrylic shells is excellent, though it may not seem so at first. The passive attenuation is slightly below what the higher-end Etymotic earphones and my UM Miracle are capable of but higher than with the universal stage monitors from the likes of Westone and EarSonics
Microphonics (5/5) – Microphonics are pretty much nonexistent, as is the case with most customs. The cable cinch should still be used if the X1s were to be exercised in but for day-to-day use I don’t see myself bothering with it
Comfort (5/5) – Putting the customs in requires a bit of getting used to but the twisting motion eventually becomes second nature. The acrylic shells are hard but not in the least uncomfortable – sometimes I am aware of them and other times I forget they’re in my ears at all. Obviously fit will always depend on the quality of the initial molds and maybe a bit of luck but a properly-fitting custom should be very comfortable. Kozee also offers an industry-leading 90-day fit guarantee, which should be taken advantage of if the customs remain uncomfortable after an initial break-in period

Sound (8.4/10) – On the list of additional features that the Executive package brings to the X1 only one caught my eye – upgraded drivers. Presumably, the vents clearly visible on the rear of my X1 drivers are not a cosmetic touch and wouldn’t be possible with the silicone-shelled base model. I can’t see any markings on the transducer but it is a little smaller than the Sonion 2015s used in my 1964-T and positioned right near the nozzle. As usual, I can’t claim any direct knowledge of the effects venting has on a balanced armature transducer but, rear vent or not, the X1 is an impressive performer and does share some aspects of its signature with the $1100 vented-BA FAD FI-BA-SS.

The dominant aspects of the X1’s sound are the crispness and clarity – the earphone really makes no sacrifices whatsoever on either front. Being a single-armature design, however, it does sacrifice a bit of extension on either end as well as some note thickness to cover the entire spectrum. Sub-bass roll-off is most noticeable, dropping off fairly quickly below 50Hz or so. In contrast to my 1964-Ts, there is also no mid-bass boost adding extra warmth or punch to the sound. Instead, the X1 is more Etymotic-like in nature, with level and very tight bass. It is punchy and accurate but clearly not for those who desire sizeable bass rumble or body. In addition, the limitations of the X1’s low end are difficult to remedy with and equalizer – the bass can be dialed up a touch but attempts to change the nature of the earphones significantly are met with distortion. Definitely not one for bassheads, then.

The midrange of the X1 is balanced well with the low end and generally remains accurate and natural. Though there is some upper midrange emphasis, the overall tone is more neutral than, for example, that of the UE700 or Sennheiser IE7. As with the vented-BA FAD FI-BA-SS, the clarity and resolution of the X1 are outstanding – the single armature used by Kozee is a far cry from the drivers found in most sub-$100 universals. That said, the detail level of the X1 is a half-step below what similarly-priced dual drivers such as the UE700 and Fischer DBA-02 are capable of. Even the Ety HF5 pulls ahead slightly. The X1 also seems to introduce a bit of ‘grain’ over the midrange and lower treble. In terms of thickness, the X1 is only a bit leaner than the ATH-CK10 but also slightly more dry.

The treble of the X1 is slightly elevated without being notably harsh or sibilant. Like the midrange, it is a bit rough and edgy and tends to be very revealing of artifacts present on the recording – those looking for an earphone that will do some post-processing on sibilant tracks will be better off with a Westone or Earsonics model. There’s enough sparkle to go around and the X1 stops just short of being unambiguously bright without losing the extra bit of energy associated with prominent treble. Extension is quite decent and the X1 really wouldn’t be out of place in the Etymotic lineup (it would fit in between the MC5 and HF5).

In terms of presentation, the X1 Executive again proves itself an impressive piece of kit. Its soundstage is wide – wide enough to compete with the most capable universals – but lacks a bit of depth and height in comparison. While the soundstage of the 1964-T is a lot more compact, it is also quite a bit more spherical in shape. The 1964-T also has better imaging – the X1 may have plenty of air but it doesn’t really have the positioning precision of my other customs or higher-end universal such as the CK10 or W2. The headstage of the X1 is impressive for an earphone and broader than with the 1964-T. Like a few of the higher-end dynamics, the X1 really has an out-of-the-head feel to it but sacrifices the ability to portray intimacy to an extent. Stereo separation can seem just a touch exaggerated at times. Instrument separation is quite good but stops just short of the Ety HF3 and Westone 2. Tonally, the Kozee is just a touch cooler than my Ety HF3. A note on usability – although the specs of the X1 are unpublished, the earphones do hiss very slightly with my netbooks and some portable amps, and may not mesh particularly well with other sources that have high noise floors.

Value (8.5/10) – Though the base Kozee Infinity X1 runs an incredibly affordable $139 including DIY impressions, the $50 Executive upgrade buys additional accessories, acrylic shells, custom artwork, detachable cables, and a vented transducer. Either way, you get the fit and isolation of a custom earphone, not to mention the build quality and customization options that come with venturing into customs territory. The sound put out by the single armature combines excellent clarity with a wide soundstage and presents slightly rolled-off subbass, crisp and aggressive midrange, and elevated, but not downright fatiguing, treble. It has to be noted that as with all customs, the sound signature cannot be modified with alternate tips or a different insertion angle as it can with universal earphones. With those reservations in mind, the $189 full-shell custom from Kozee provides some very impressive value for money.

Pros: Clear, neutral, and accurate sound; excellent long-term comfort; no cable noise
Cons: Correct insertion takes some getting used to; less isolating than silicone-shelled customs; not as smooth or level-sounding as some similarly-priced universals