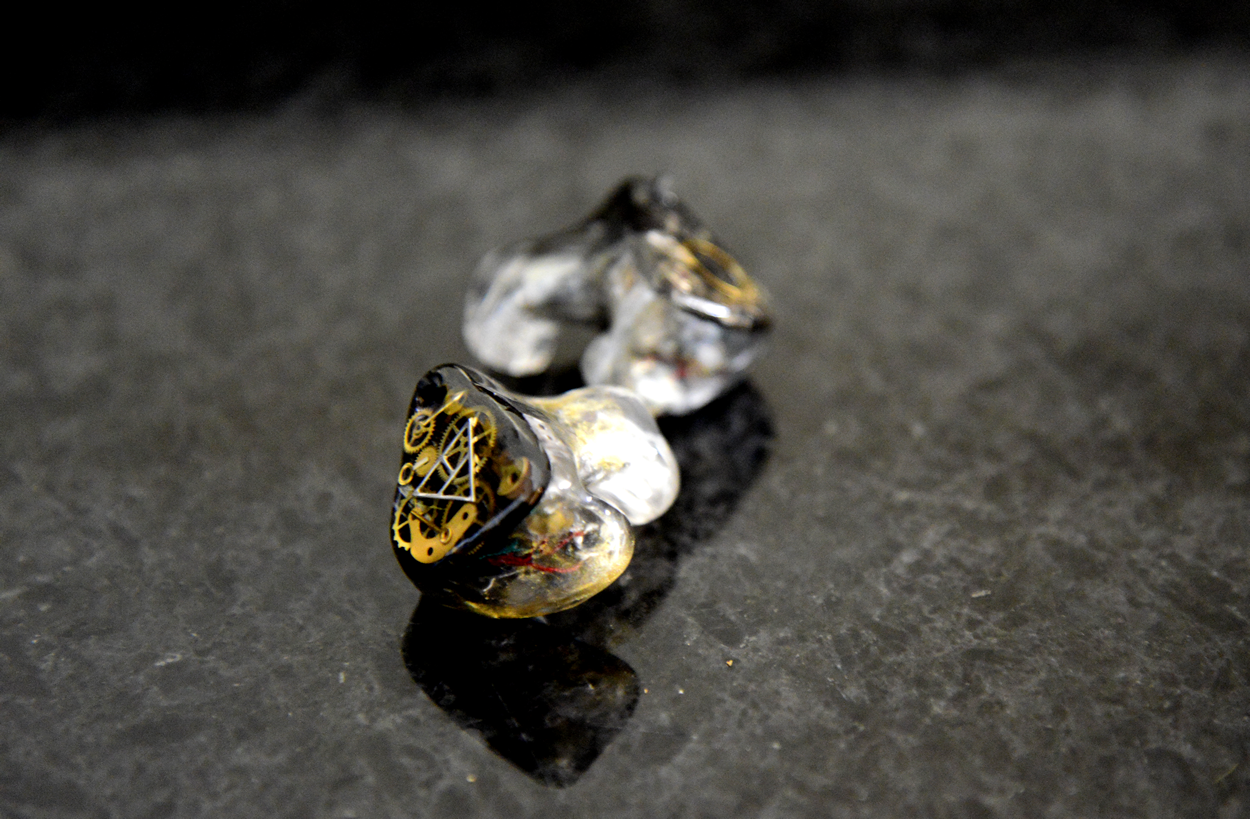 All comparisons were performed with the Aether’s bass switch on the ‘up’ (boosted) setting.

Fidue Sirius ($900)
The Sirius is Fidue’s new flagship, with a hybrid 4+1 design. Its stage is wider than the Aether, and gives it a nice spacious feel. The Sirius also has a slightly taller stage, though the Aether’s is deeper. Due to the width and height advantage, the Sirius impresses with its overall larger screen. However the combination of the deeper stage with an overall airier presentation gives the Aether’ stgae more room to breath, and a subsequent advantage in instrument separation.

The Sirius’ dynamic driven bass has delicious texture and impact, and is overall more satisfying than the Aether’s. In the low position the Aether has similar definition, but misses a bit of the impact and natural decay of the Sirius. The Sirius’ midrange is forward in comparison; warmer, with more body and lower midrange fill. The Sirius’ midrange sounds emotional and very pleasing, though missing a bit of the transparency and definition of the clearer sounding Aether. In addition, the Aether’s treble has the better definition and extension.

Overall, the Sirius and Aether are very different. The Sirius has a warmer atmosphere compared to the airier Aether, but its forward and full-bodied midrange has an engaging quality. While the Aether’s presentation is more nimble, its tonal balance between the treble and midrange brings it closer to neutral, and makes it more versatile across genres.

Custom Art Harmony 8.2 (€1100)
Custom Art recently revised their flagship, updating the drivers and crossover. In a Polish standoff, the 8.2 meets the Aether. The 8.2’s stage has a classic wide stage, being noticeably wider than deeper and tall, with an instrument positioning slightly closer to the listener. While the 8.2’s stage is wider, the slightly deeper stage of the Aether has more of a box-shaped size. The additional depth gives it an advantage in layering, and due to its airier stage, it gets a slight advantage in separation; but its stage presentation is mainly more coherent, rather than bettering the 8.2 in an absolute sense. Both ciems display precise imaging, with good localisation of instruments within the space.

The 8.2’s bass has more impact than the Aether, while also having better speed and definition. Its decay is very quick, and overall the 8.2’s bass is of high quality; satisfying in impact, precision, and texture. The 8.2’s midrange is warmer and slightly denser than the Aether, and vocals are positioned closer to the listener. As both remain close to neutral in overall signature, average note thickness is quite close, though the 8.2’s are slightly thicker due to its slightly more forward midrange. The Aether’s midrange however is clearer with slightly better resolution. While vocals are less deep and emotional, they have more clarity.

The 8.2’s treble is more laidback in the overall presentation, which gives it more of a smooth, mid-centric tonality. The 8.2’s midrange is more forward, the Aehter’s treble is tonally more balanced within the presentation, and has the slightly better extension. Differences between the two will come down to preference. Both have a signature that approaches neutral, albeit with a different twist: the 8.2 has a more mid-centric signature that gives it a slightly warmer and more forward sound, where the Aether’s slight V-shape gives it a more open and airier sound due to more presence in the 4-5 KHz region. 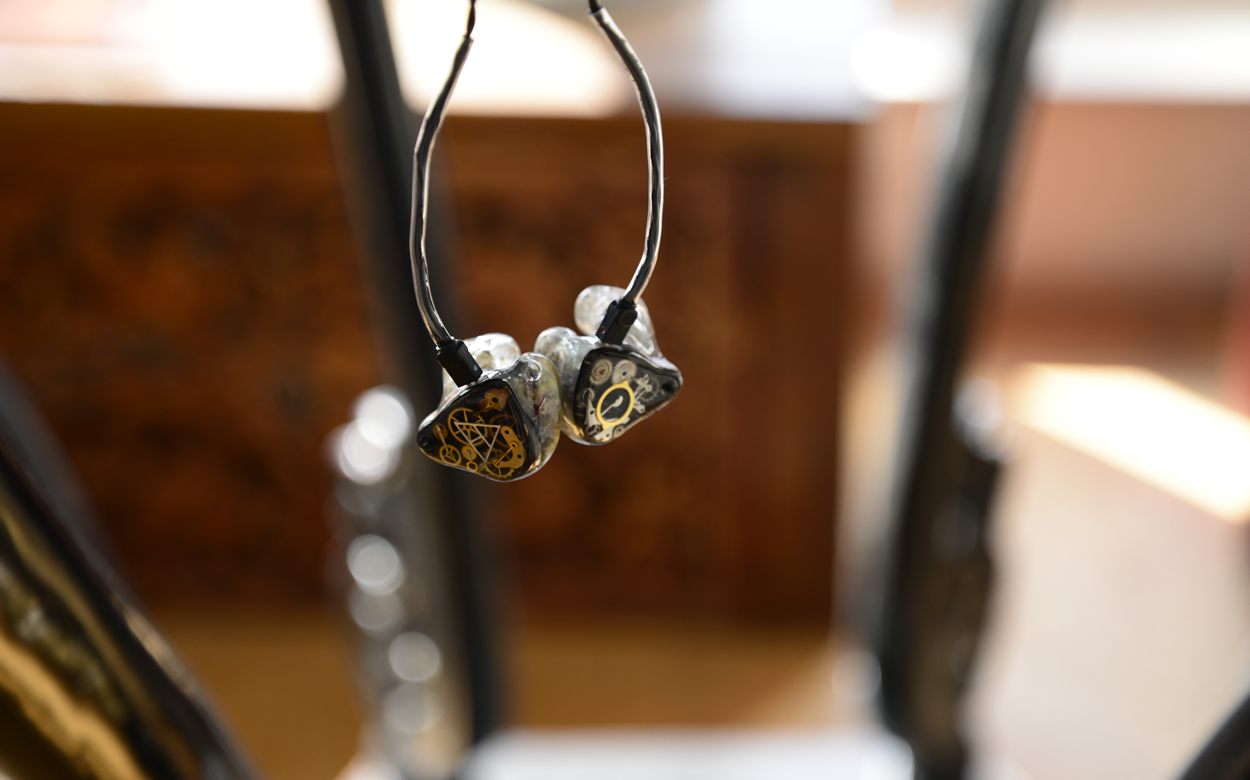 EarSonics S-EM9 (€1490)
The S-EM9 remains one of my favorite iems within my collection; it doesn’t have a particularly impressive midrange, but impresses with well above average technical capabilities. The Aether has a slightly wider stage, but overall dimensions including depth and height are very similar. Both iems have a well-proportioned, box-sized stage, and excel in airiness and separation. The S-EM9 gets a slight edge in overall precision; being slightly cleaner and more resolving.

The S-EM9 has a U-shaped signature with well-controlled and punchy bass, slightly pushed back mids and enhanced treble. Its stage positioning is slightly more distant, and the Aether creates slightly thicker notes. The S-EM9 has better sub-bass extension and impact. The Aether’s midrange is tuned more neutrally, and the slightly fuller and inherently warmer midrange conveys more emotion compared to the more distant midrange of the S-EM9. Vocals are equally clear, but more captivating, allowing the Aether to shine with especially female vocals.

Overall warmth is more similar than different though, with neither being particularly bright or warm. The S-EM9’s treble on the other hand is slightly more pronounced, and wins in extension, definition and overall precision. Taken together, the S-EM9 is slightly more precise; the Aether on the other hand wins points with its more natural tonal balance, specifically its enveloping midrange.

Rhapsodio Solar ($1550)
The Solar is characterised by its enhanced mid-bass, that plays a prominent role in its presentation. Due to the enhanced bass the Solar creates thick notes, giving it a very full and engaging sound. Compared to the Aether, it brings more power and rumble to the table. It also comes with a great deal more warmth from the sub-bass however, affecting its airiness and midrange transparency; the Aether’s stage is cleaner in comparison. Both iems have very good separation though, as the Solar’ stage is slightly wider, with equal depth and excellent imaging.

The Aether’s midrange is airier, but also more transparent. Due to the Solar’s bass, vocals sound deep, warm and full; with the Aether on the other hand they have more clarity. With its thick notes, the Solar’s full-sounding midrange is fun and engaging. The Aether however bests it in resolution – overall instrument definition and precision. Both the Aether and Solar have a smooth treble with a slightly warmer tone, the Solar’s treble however has slightly better definition. Taken together, the Solar is the fuller sounding unit with its powerful bass, the Aether the more balanced.

It is often stated that a popular iem can compete with any much higher priced iem; a claim that I feel is often only partially true. An iem can offer a high level of detail and clarity, have a full sound or simply beautiful tone, but still miss that last bit of technical refinement for me to personally classify it as ‘TOTL’; properties that relate to its audiovisual presentation such as soundstage dimensions as depth, layering, and separation; and technical capability, mainly relating to imaging, resolution, transparency and speed. Of course, not every higher priced iem is per definition more technically capable than a lower one; it should however be expected to be, in order to justify its price. After all, if it would solely come down to signature, there shouldn’t be any difference between price levels.

The Aether is one of the occasions I find it does punch above its price class, and easily contends with the TOTL level priced around $1600. For starters, it has one of the most balanced and natural sounding signatures within my collection. But having a balanced signature only puts its foot in the door – solid technical performance, that’s what opens it. The Aether’s presentation is of very high quality. While soundstage width has the most direct or visible effect on a presentation, instrument separation relies more heavily on depth and layering. The Aether’s stage is homogenous in all directions, and its instrument placement within the stage is very good. The combination with the airy stage leads to a very effortless separation, and natural presentation of the music. Resolution and imaging that easily competes with the TOTL average, completes the final bit of precision required to check off my list.

A balanced signature should imply it is allround and versatile over genres, which indeed is the case. Quite frankly, there really is a lot to like, and very little to hate. Sure, its bass leaves some room for improvement. But even with the best there’s room for improvement; the S-EM9’s midrange could be more lush, Zeus-XIV more allround, the 5-way could have more sparkle – there’s always something to complain.

The only thing off is its price, since it might suggest it’s not at the level of its more expensive peers. But with a balance between precision and musicality, the Aether has a lot to offer; it’s own take on neutrality, presented in a smooth and natural way.