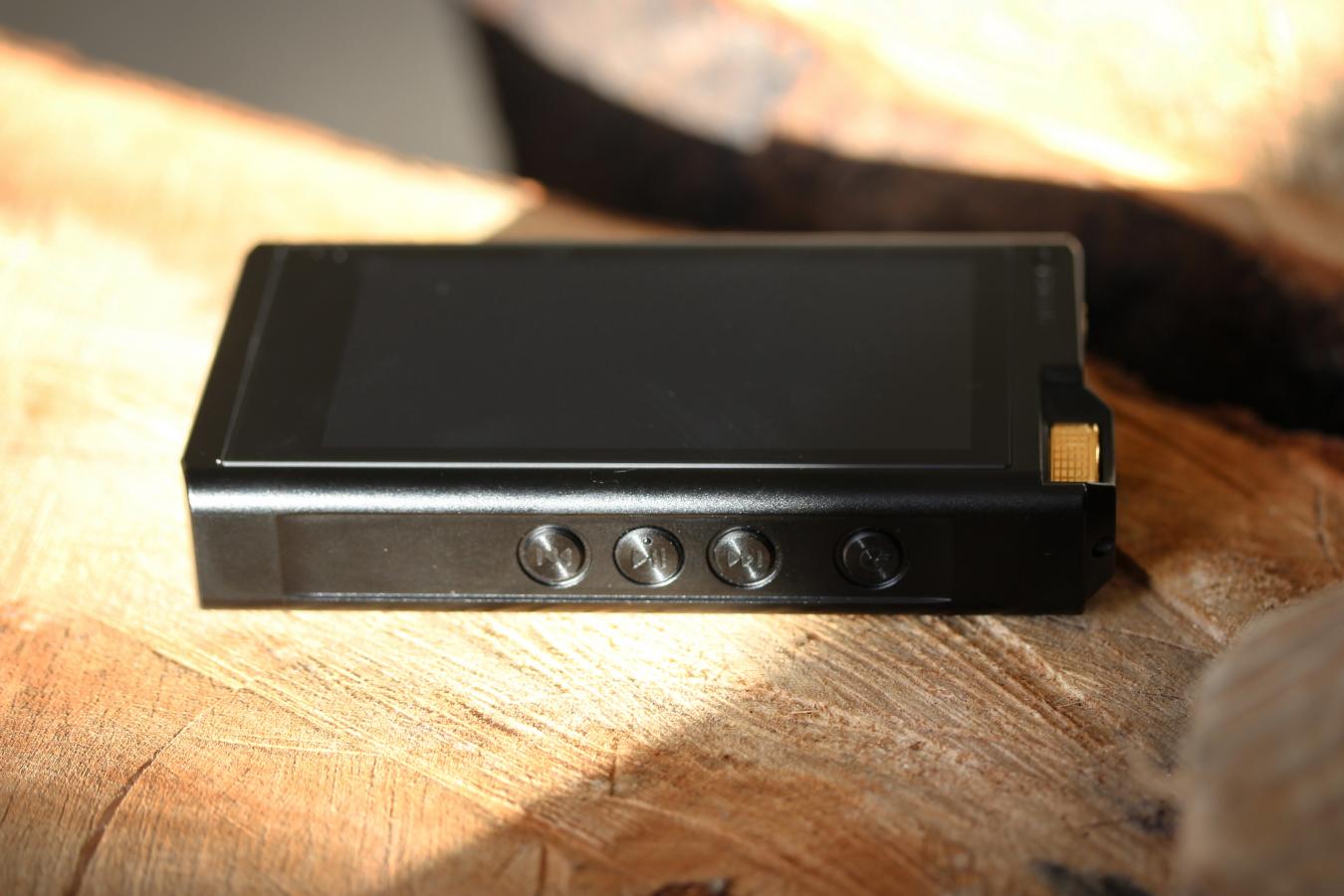 I’ve always been a man of few daps, so I unfortunately do not have a lot in my arsenal to compare. I would definitely recommend taking a look at Twister6’ review of the LPGT for a wealth of information on technical specifications, pair ups and comparisons, as well as a different point of view of course. In addition, our own Deezel will be following up with his own perspective of the LPGT shortly. In this section I will focus on a comparison with my alternate player, the SP1000 Cu. In addition, I will make a brief comparison with its other main competitor, the WM1Z. This will be from memory unfortunately, so take it with the necessary grains of salt.

Astell & Kern Ultima SP1000 Copper
Love or hate them, the A&K players remain unparalleled in their design. I’ve yet to see a player that remotely resembles the class of the high-end A&K players, at least in my opinion. The AK380 and SP1000 are both stunning players to behold, and feel sturdy in the hand. Even so, that sturdy feel does not necessarily translate to build quality, as enough people have experienced technical deficiencies throughout the years, including myself. The LPGT’s design does not exude much ambition, but it can fall back on the stellar reputation of the LPG when it comes to durability. And personally, I value its simple design over a failed attempt of something trying to be grandiose.

In terms of practical use, the A&K and LPGT each have their respective pros and cons. As mentioned in the introduction, two major advantages of the LPGT are its quick start-up time and effective EQ. The A&K’s EQ is easy to access and adjust, but its effectiveness is marginal at best. It can make minor adjustments to the sound, but fails to make a significant impact when required, and often leaves me wanting. Its ease of use however should serve as an example to the LPGT, which is quite a pain to manually adjust, but can have a profound effect. In addition, the LPGT offers a variety of presets, so it’s not at a complete loss in terms of usability. Another important factor is battery life, but I couldn’t point at a winner with any certainty. I’d say both are more or less even, but I have to admit I haven’t paid much attention to the exact duration.

Their most important feature of course is their sound. In short, in overall performance and enjoyability I have come to appreciate the LPGT as an equal – I can take either on the road without missing the other. The primary difference between the two is their tone. I have a preference for a slightly warmer tone, and the SP1000 Cu delivers with excellence. The SP1000 Cu’s tone is exceedingly natural, and simply beautiful to my ears. Even so, the natural tone, resounding from an enhanced and warm mid-bass, affects the SP1000’s transparency. In addition, the midrange itself is slightly laidback, while its imaging is not very precise. So from the start, it’s always produced a somewhat polarizing sound for me with major strengths and weakness; its technical performance in terms of transparency and imaging leaves something to be desired.

By comparison, the LPGT is decisively more neutral in tone. The SP1000 Cu has a beautiful coloration, but coloration nonetheless. The LPGT seems to remain truer the original production of the track, as well the IEM’s signature. Even so, it does so in a tasteful, enjoyable manner. For example, even though the SP1000 Cu is warmer, it isn’t smoother – I would classify both players as particularly smooth. So the LPGT will resonate closer with listeners that prefer an uncolored sound. In addition, its staging is a little bit more precise, while it improves in transparency. The relative strength of the A&K in turn lies in the extraordinary way it reproduces the timbre of say, an acoustic guitar.

Sony WM1Z
The philosophy behind Sony’s design is somewhat similar to the LPGT: straightforward and functional, excluding any unnecessary curvatures. Its gold-plated exterior however out-blings the LPGT’s simple design, although most people will keep theirs in a protective case. Due to the WM1Z’s heavy weight, it probably feels even sturdier than the LPGT; but I would consider them both to be exceptional in solidity when it comes to build, and similar in terms of design. Where the WM1Z is a certified ‘brick’, the LPGT’s lighter weight makes it a bit more practical.

The WM1Z’s main practical advantage is its extreme battery life: Sony players reside in a class of their own in that regard. The LPGT has a fairly standard battery life, which of course is no comparison. In terms of EQ, the Sony has its own qualms. The EQ is relatively effective and easy to use, but is severely limited by its non-adjustable 8 bands. In addition, boosting a certain range has a broad effect on its neighboring frequencies, so the EQ is not particularly precise. From memory, I would say its overall UI is as stable and intuitive as the LPGT’s.

The WM1Z of course has its own unique and rather pronounced sound; due to its enhanced mid-bass it is emphatically warm in tone, combined with a very black background. Accordingly, the WM1Z has often been classified as having a natural, ‘analogue’ sound. The WM1Z’s sound is certainly natural, and one of its primary strengths is its ability to make even bright iems as the DITA Dream and Rhapsodio Galaxy sound relatively smooth and natural. Even so, I personally found the dominant warmth in its tone limiting when it came to versatility over a wide range of music; it simply didn’t work for genres as pop or EDM that required a more lively upper-mid and treble presentation, at least for me.

Compared to the LPGT, the WM1Z’s mid-bass is more pronounced, resulting in a larger vocal and instrument presentation. In addition, its tone is significantly warmer. The LPGT has a more linear signature, bringing greater balance between the bass, midrange and treble. Accordingly, it is a more versatile all-rounder for a wide variety of genres, where the WM1Z can really shines for specific genres or certain IEMs. In terms of staging, the two are fairly similar. Comparing exact dimensions is a little bit tricky from memory (the WM1Z’s balanced mode might be a touch larger than that of the LPGT), but both convey a great sense of precision in their positioning, and overall high quality of focus and imaging. Their resolution may be roughly similar, but I would give the edge to the LPGT for transparency.

A few years back Lotoo made a grand entrance in a compact size. Despite its high price and lack of touchscreen, the LPG impressed with superior sonic ability. It sounded powerful, bold and energetic. Lotoo’s definition of ‘reference’ at the time. Although that specific definition didn’t align with mine, their take on sound reproduction did; the LPG was a perfect companion to my smoother, warmer, and calmer AK380 Cu. Its forward midrange and treble sparkle gave it specific qualities that could make various IEMs perform at their best.

The LPGT is the next step in its evolution: it shares similar DNA, such as the way its EQ is programmed to function, and the speed with which it turns on and stops. And in a more general sense, its overall tone. But at the same time it has grown, both physically and sonically. It’s larger in size, and finally has the desired touch screen. In addition, its sound has clearly matured. Where the LPG was energetic and in your face, the LPGT is controlled and reserved. It’s a refined sound, that impresses with its balance and performance. The LPGT’s sound is smooth yet engaging: a near-perfect execution of neutral.

So if one were to ask me whether the LPGT a clear step above its predecessor, my answer would be yes: over the board, the improved interface and refined presentation puts it ahead. But as often is the case, it comes with a caveat. How big this step is really depends on how much you value a touchscreen, and what kind of sonic character you’re looking for. I have to say, as much as I have grown to appreciate the LPGT, the LPG remains a guilty pleasure of sorts, and a treat to listen to. When looking at the bigger picture, the LPGT positions itself firmly between its main competitors. Its neutral but smooth tonality will be highly appealing to those valuing an uncolored sound, with its effective EQ as special weapon. If you really need one player to do it all, while averaging preference over all listeners, the LPGT is going to be hard to beat.