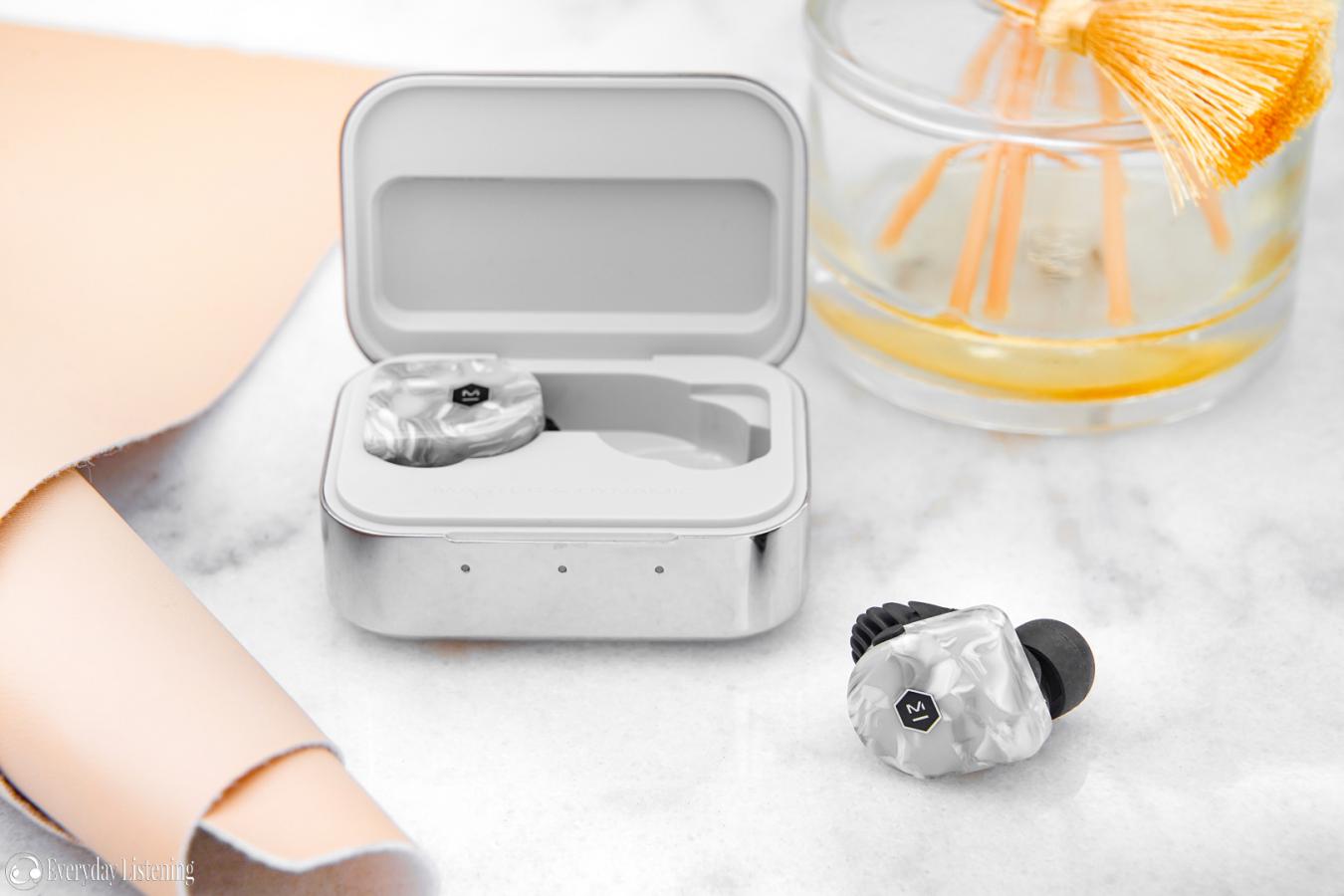 ANC not as effective as competitors, Stabiliser fins sharper than the previous generation

The MW07 Plus may not be the ideal traveller’s earphone, but represents an all-in-one solution that impresses with its versatility.

I’ve definitely reviewed enough Master & Dynamic products for regular readers to be familiar but for the uninitiated, the New York-based company means business. Audiophiles may turn their nose up at M&D’s beguiling focus on design and sound tunings that seemingly cater towards the common consumer. However, the staying power of this company puts them a clear step up over niche designer brands that have faded into obscurity over the years. The MW07 was one of their more quintessential products, almost unanimously praised for its sound quality and build within the first generation of TWS earphones. The competition has come far yet M&D haven’t rested on their laurels, introducing two new models; the cheaper, sports-focused MW07 GO and the more feature-laden MW07 Plus. Both introduce a whopping 10hrs of battery life and bolstered water resistance with the Plus adding ANC on top. Coming in at $299 USD, the MW07 Plus isn’t cheap and represents a step up in pricing even from other premium models. Yet, its feature-set is also the most comprehensive on the market. You can read more about the MW07 Plus here.

I would like to thank Master & Dynamic very much for their quick communication and for providing me with the MW07 Plus for the purpose of review. All words are my own and there is no monetary incentive for a positive review. Despite receiving the earphones free of cost, I will attempt to be as objective as possible in my evaluation.

The MW07 Plus is well-packaged as one would expect from a premium product. Inside the box are compartments containing the accessories. In addition to the earphones within the dapper stainless steel charging case, M&D include a canvas pouch to prevent scratches, a USB-C to USB-C charging cable and a Type-C to USB-A adapter to allow charging from computers and older plug-ins. Furthermore, 5 silicone ear tips are provided to ensure a snug fit in addition to 3 sizes of silicone wing jackets to suit a wide range of ear geometries. The Plus is certainly a well outfit earphone which is important when there’s no cable to stabilise the fit.

Much like its namesake, the Plus makes subtle adjustments to the original MW07, implementing the same hand-finished acetate faceplates and blockier design that mostly occupies the outer ear. Many comments can be translated from my original MW07 review; the earphones are wide but are compact otherwise, with a full silicone jacket creating a soft, comfortable feel in the ear. The water resistance has been increased to IPX5 which makes suitable for the gym if not fully submergible. Despite being almost entirely plastic, the earpieces feel incredibly solid and dense in the hand and ear, these are a premium product true to M&D’s legacy.

As with their predecessor, I’m a fan of the physical buttons that are more reliable, tactile and easier to discern than touch controls. They’re low-profile and never intrude while working reliably, even during active use. The Left earpiece houses a volume rocker while the right has a single multi-function button that can also activate smart assistants. The rocker now possesses additional functionality; holding the down button activates ANC while holding up activates the aware mode. Both earpieces have notification LEDs in addition to microphones and IR sensors to detect when the earpieces are in the ear.

The earphones are comfortable and fit stability is upheld via several ear fins that lock into the back of the ear. By segregating the silicone fins, they conform well to the shape of the ear, though the edges of the fins can irritate the ear more than those from Bose to name an example. The fins have also been reshaped compared to the MW07, having a slightly sharper angle that was, to my ears, less comfortable. This was solved by sizing down the wings one size from the MW07 though those with smaller ears may want to remove them entirely. Of course, this will be to the detriment of fit stability. With the appropriately sized tips and covers, the earphones maintain a very consistent fit and seal even during active use and driver flex isn’t apparent either.

The feed-forward noise cancelling performance is middle of the road. Competitors from Sony and Apple’s Airpod Pros are noticeably more potent, offering a wider range of cancellation by implementing both feed-forward and feed-back ANC. Meanwhile, the MW07 Plus offers moderate passive isolation combined with reasonably complete cancellation of low-frequencies and a mild blunting of everything else. The pass-through mode is similarly mild, lacking the clarity and openness of the Airpods or even Sennheiser’s Momentum TWS, but offering ample intelligibility to distinguish announcements and voices. As a result, the MW07 Plus is noticeably better equipped for commute than its forbearer. However, those wanting tranquil air travel will want to invest in M&D’s over-ear MW65 or look towards the Sony or Apple in-ears.

Aesthetically identical, the carrying case is small, pocketable and opulent with an unyielding stainless steel construction. That said, subtle refinements have brought a more fluent user experience. For instance, the hinge action is now more tactile featuring a reverse magnet that holds the lid open in addition to sealing it firmly shut. The same status LEDs adorn the front and a USB-C charging port make a return while wireless charging remains an omission due to the nature of their construction. The case is now slightly heavier, accommodating a slightly larger battery that offers additional overall runtime.

Thankfully, M&D has kept the pairing process straightforward and intuitive as with its progenitor. Upon first removal from the case, the earpieces enter pairing mode and auto-connect on subsequent power cycles. To add an additional device, the earpieces have to be removed from the ear and the power button held for several seconds after which the status LED flashes to denote pairing mode. One notable addition to the spec sheet includes BT 5.0 which represents more than just an increase in power efficiency. The new earbuds immediately have more stable connectivity and I didn’t experience dropout from my Pixel 4 even in Sydney’s crowded CBD. Latency wasn’t an issue in my uses with minimal issues with lip sync when watching videos. Apt-X is supported which offers greater fidelity, however, Apple users will be disappointed by the absence of AAC.

The earpieces can now pair independently and each feature dual microphone arrays that enable mono calls on both. The microphones are now beamforming as opposed to omnidirectional and were noticeably better at isolating my voice from background noise than the vanilla MW07. Volume was also noticeably better and call quality overall was immensely improved and similar to strong performers such as Sennheiser’s Momentum TWS. Both earpieces also have IR sensors and can auto-pause music when removed from the ear. I was surprised this wasn’t more discussed as the new MW07 earphones have some of the best battery life on the market, rated at 10hours.

Impressively, activating ANC doesn’t hugely affect the longevity of the earphones. I was able to reliably achieve 8-9hrs of use at medium volumes. This is compounded upon by the case that offers 3 additional charges for 40hrs total runtime in ideal situations. Quick charge is also supported, offering 5hrs of runtime from a 15min charge. This combination of longevity and ANC, even though it is a less potent implementation, may make them a strong contender for frequent travellers as few ANC earbuds offer enough runtime to cover an international flight.