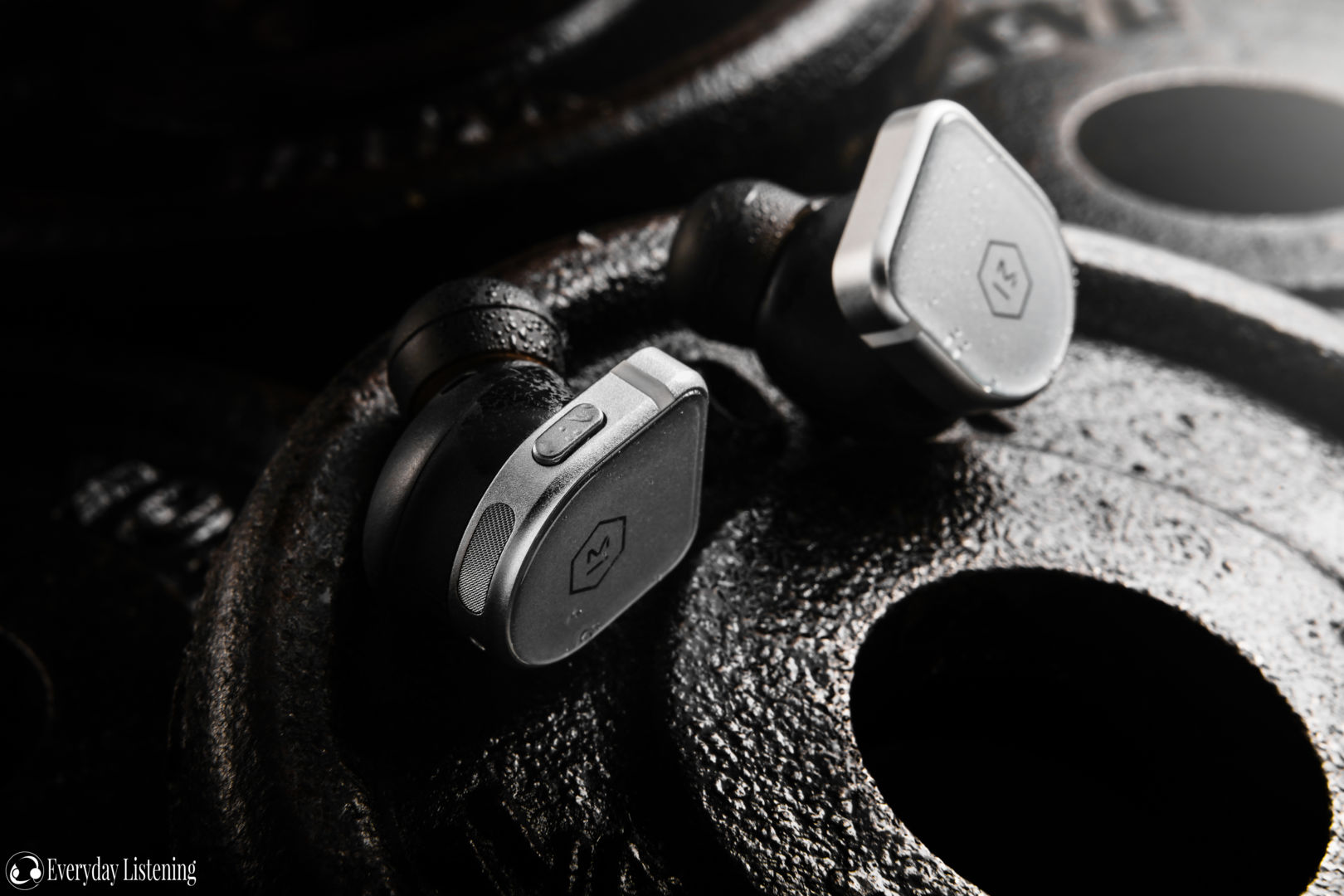 Testing Methodology: Measured using Arta via IEC 711 coupler to Startech external sound card. 7-9KHz peaks may be artefacts/emphasised due to my measurement setup, less so with deep fit. Measurements besides channel balance are volume matched at 1KHz. Fit depth normalised to my best abilities to reduce coupler resonance. Still, due to these factors, my measurements may not accurately reflect the earphone or measurements taken by others. Of note, I was receiving some inconsistencies with my measurements, this graph most resembled my subjective experience, however, please take this with a grain of salt due to these factors. I gave the MW08S 100hrs burn-in to ensure maximum performance prior to subjective breakdown. Note, these measurements differs from that in my MW08 review. I have switched to a new measurement method for TWS reviews as previous measurements were not consistent. This graph is far more in line with what I am hearing.

The MW08 Sport measures and sounds very similarly to the original MW08 but I did find them to differ slightly in listening. That means you get an L-shaped sound derived from a big mid-bass, mostly natural midrange with a hint of upper-mid emphasis to enhance clarity, and crisp top-end with a small lower-treble peak. The MW08S specifically has a slightly heavier bass focus and a more laid-back top-end. These effects persist even when using the silicone tips on both and are further exaggerated with use of the Sport’s foam tips. In turn, the Sport does come across as thicker and more powerful but also more veiled and less separated, even with silicone tips.

Going by sonics explicitly, the standard MW08 would be my pick any day, even for gym use as it already had a robust and powerful sound. The MW08S arguably takes this one step too far, resulting in a sound that isn’t bad, but also isn’t as versatile and therefore, is harder to justify at such a premium asking price. As before, the beryllium driver provides a controlled and textured sound that a lesser driver cannot provide. My qualms here lie chiefly with the tuning which I see as a step back from the MW08.

I was impressed by the MW08 for its solid driver control that permit an articulate bass response even in the presence of large emphasis. While on the MW08S this mostly applies, it is to a lesser degree. The MW08S retains the strong sub-bass extension and power of its forebearer; you get a kinetic slam and rumble that many TWS earphones lack entirely. Though good weight is found below, the mid-bass once again steals focus, laying down punchy, full and rounded notes. They are plumper here than on the MW08 and a bit more bloat and smear is evident alongside a warmer tone. In turn, I did find that impact was overwhelming some of the finer details on the MW08S, but I can see the appeal for bass heads wanting big power and note size.

Bass isn’t sloppy nonetheless and, as before, the Be-plated driver imparts a speedier and well-controlled note presentation. Here, I can see the driver struggling more with the greater emphasis as notes are a little softer around the edges than on the MW08, and the foam tips do not help either. It’s a tall ask especially when combined with the burden of ANC. Still, note definition is sound and its thick notes are nicely-textured, nevertheless. There is some smear in the mid-bass so it isn’t the most defined, similarly, separation is lacking due to the fullness on display. While the strong driver control and faster decay do help here, they are insufficient to fully counterbalance the tuning. Listeners wanting huge dynamics and weight will still find the MW08S has a position in the market, as it is able to provide this in spades.

A medium lower-mid dip and cleaner upper-bass tuning do help to redeem separation between bass and mids. However, due to the level of mid-bass emphasis combined with a less aggressive upper-midrange lift, it remains a clearly coloured presentation. The midrange itself showcases a sound tuning, with progressive emphasis to a natural 3kHz hump that sustains into the 4kHz region for added clarity and delicacy. This does not indicate the MW08s is either of those descriptors in any manifestation as both warmth and body are sizably lifted from the low-end boost. In turn, the MW08S remains clearly on the warmer and fuller side. I found the MW08 to be one step more natural here, assuming an organic character. However, the further laid-back top-end here is rather damming to separation and openness, creating a presentation prone to veil on some tracks.

Nonetheless, colouration is just shy of congestion as vocals always remain reasonably well-resolved and discernible. The voicing is mostly natural but again, quite chesty and bloated, especially male vocals. Bass never overwhelms the midrange, but it is quite laid-back and won’t suit those wanting vocal intimacy in kind. The smoother articulation here, instigated by a drop in treble presence, is not ideal given the level of fullness on display. I think a slight treble bump would be desirable to reintroduce a more defined note structure and lift small details. As is, the MW08S does lack openness and cleanliness to my ears. I feel this is an instance where an in-app eQ of some sort would have greatly enhanced the experience because as is, the midrange will be something for bass lovers to tolerate rather than a complement to enjoy.

As on the MW08, the top-end is defined by a modest lower-treble bump that aids crispness and contributes to a more forward detail presence that cuts through its thicker mix. It is slightly more laid-back here, especially so with the included foam tips that are known to attenuate highs. Nevertheless, it remains a crisp, clean and well-resolved sound. While I am not a fan of its effects on the midrange, I still found treble to come through clearly. Instruments are well-bodied too as the peak isn’t especially large and there is plenty of fundamental below. The transient response is fairly clean too, notes have a defined leading edge and decay naturally, leaving textured notes and well above average fine detail retrieval.

Similar to before, the MW08S’ treble response balances energy and long-term/high-volume listenability well, actually it’s more forgiving here than before. This comes with minimal detriment to detail retrieval in the background or foreground and I am hearing similar resolution and extension overall as you’d expect from two mostly identical designs. Further drawing parallels, the MW08S does have a darker background, meaning it is clean and free of glare and other fatiguing properties entirely. This also means its detail presentation is on the superficial side, but the same goes for essentially all TWS earphones. To reiterate, the MW08S is in the upper eschelons of TWS design, delivering great foreground detail retrieval alongside above average background detail retrieval. And this works to the benefit of a far more layered and immersive soundstage than most competitors.

It’s always important to set up expectations in a review so it should be noted that many comments here are relative to other TWS earphones unless stated otherwise. In the same vein, do not expect the imaging acuity of a wired earphone here, but a stage with good dimension, nonetheless. The MW08s performs mostly identically here to the MW08. You get good width and slightly less depth, forming an oval presentation. Imaging is relatively sharp, slightly less so than the MW08 but still a good performer. Layers especially are well defined and delineated between background and foreground which is a step above your average TWS earphone.

Though vocals are distant, they still uphold a strong centre image which keeps the presentation stable and focused. It’s small details like this that elevate the experience though whether that justifies the extreme price premium is another question. Separation leaves to be desired and is my main complaint coming from the MW08 that was itself, not a great performer. In the bass and bass/midrange transition especially, the Sport sounds quite bloated and fine details are easily glanced over.

I will phrase my MW08 review here as I found the experience to be identical: The MW08(S) sounds identical in all settings, however, slight degradation of sound quality is evident under scrutiny. With ANC on max, the transient response becomes slightly hazier and note definition is slightly reduced. The background is not as clean and there is less separation between layers in the soundstage with a slight drop in width too. The difference is not huge but if you’re critical noticeable. However, in the presence of ambient noise, the trade-off is heavily justified by the substantial noise cancellation and most listeners would be hard pressed to notice the differences.