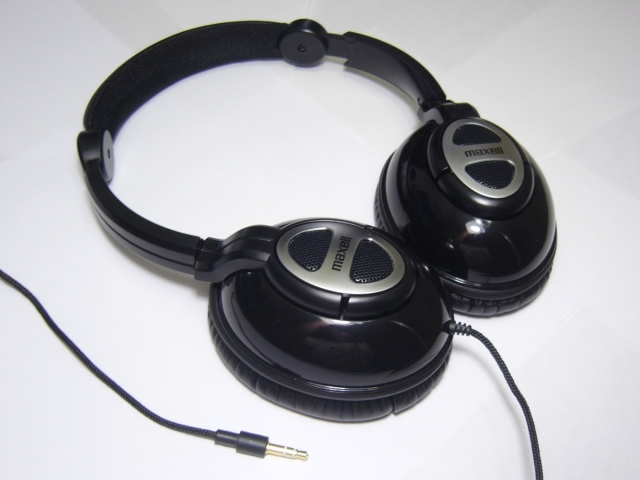 Build Quality (6/10): The construction of the DHP-II is quite typical of entry-level consumer headphones. Except for a thin aluminum band used to reinforce the headband, they are made mostly out of a lightweight plastic, not unlike the JVC HA-S700. There is very little to go wrong as the headphones are not fully collapsible, though the cups do rotate 90 degrees to fold flat. The long and thin cord is nylon-sheathed for extra protection but strain reliefs on either side are minimal. On the whole, while I don’t feel comfortable tossing the DHP-II around like I do with some of my DJ phones, they don’t need to be babied, either.

Comfort (9/10): The DHP-II is a small and light circumaural headphone similar in size to the JVC HA-S700 and Panasonic RP-HTX7. Though the DHP-II is not collapsible, the joints all have a wide range of motion, allowing for a secure and stable fit. In addition, the headband and earcup pads are just as soft as the wonderful memory foam padding of the HA-S700 and clamping force is fairly low, resulting in great long-term comfort.

Isolation (6/10): The DHP-II isolates surprisingly well for a semi-open headphone and does a respectable job of preventing leakage at moderate volumes levels. However, the similarly-small JVC HA-S700 and Equation EP-3070 absolutely wipe the floor with the DHP-II when it comes to actual attenuation.

Sound (7/10): Always skeptical and yet hopeful when it comes to lo-fi brands, I truly had no idea what to expect when I shelled out upwards of $30 on a set of the DHP-IIs. After a month with them, however, I can say that the massive amounts of praise the headphones have received were fully warranted. At its core, the DHP-II is an uncompromisingly fun-sounding headphone. The most striking aspect is the robust and full-bodied low end. The bass of the DHP-II is deep and punchy, not as tight and clean as with something like the HD25-1, but more than good enough for the asking price. It is well-extended, hits reasonably hard, and remains accurate throughout. I wouldn’t call the low end of the DHP-II particularly aggressive but it is ever-present and definitely acts as a solid foundation for the rest of the sound. Though there is a slight mid-bass hump, most of the time the low end of the DHP-II stays clear of the midrange, which is smooth and competent, if not highly emphasized. The mids are clear and quite detailed, positioned front and center as they should be and boasting just a touch of warmth. For my blues and jazz tracks it’s quite difficult to imagine a better signature than that of the DHP-II.

As for the treble, it is crisp and very clear without a shadow of harshness. Sibilance is similarly absent. Top-end extension doesn’t quite nudge the HD25-1 or ATH-M50 but is good for a $40 headphone. Same with the detail – the ~$100 DJ headphones from Audio-Technica, Denon, and Ultrasone I’ve been using lately simply offer more of it – but at a hefty increase in price (and bulk). On the whole, the DHP-II sounds rather delicate and refined – and even more so when the price tag is taken into consideration. The presentation is equally likable – the DHP-II gives a convincing sense of space and has good dimensionality, though its soundstage is definitely not the largest as far as portables go. Imaging lags behind high-end sets, but for the price and within the confines of the intended sound signature, the Maxells do nearly no wrong.

Value (8.5/10):  The Maxell DHP-II is yet another outstanding sub-$50 buy for anyone in search of great-sounding, extremely comfortable, and reasonably portable headphones. Though calling a headphone ‘Digital’ as Maxell did with the DHP-II is a major pet peeve of mine, I have to admit that the engineers definitely did their research when designing the unit. It’s far from the best-built portable out there but with care it seems like it will last. Isolation is impressive for a semi-open set and the unit is surprisingly well-packaged with a soft carrying pouch, 1/8” adapter, and handy extension cord to supplement the 6’ long nylon-sheathed cable. The sound signature is relentlessly fun, with slightly boosted bass, and makes the DHP-II an extremely enjoyable headphone for movies and music alike. For $40, this one’s a keeper.