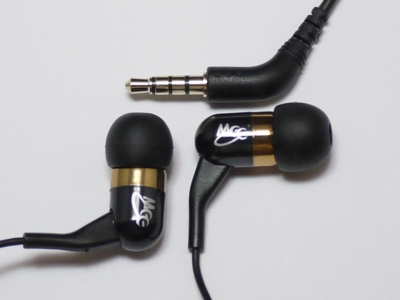 Sound (8.7/10) – from Fischer Audio SBA-03 review – the A161P sounds identical – Until just a few years ago, the majority of single balanced armature earphones fell victim to shortfalls in frequency range and performance at the limits when compared to their dual- and triple-driver counterparts. Advertising a mid-tier single-BA earphone meant disclaimers such as ‘full range’ were an absolute necessity. This perception has since been seriously challenged by the reasonably-priced but extremely capable single-BA models released by Etymotic Research, Phonak, and now – Fischer Audio.

The SBA-03 is an impressive all-around performer, not just ‘for a single BA’ or ‘at its price point’, but overall. The bass is fast and resolving, as expected from a BA-based earphone, but it is also surprisingly punchy, even aggressive at times. Impact is greater than with the Etymotic ER-4S and ACS T15 but not quite a match for the VSonic GR07 or Fischer’s own dual-dynamic Tandem. It has good depth and body but is also tight and controlled, with great clarity and good detail, though the latter lags slightly behind the pricier Ety ER-4S and ACS T15, partly due to the average dynamics and aggressive nature of the SBA-03.

The midrange is slightly forward but still balances out very well with the punchy low end. Detail level is good – not quite as impressive as with the Etymotic HF5, but then the SBA-03 doesn’t sound as lean, either. It is still a crisp, very slightly dry earphone with good resolution and a fairly neutral tone. The aggression from the bass carries over – the midrange of the SBA-03 is anything but laid-back. Vocals are very prominent and guitars have good bite. Compared to the Tandem and VSonic GR07, the SBA-03 is a bit less smooth and much less full-bodied but also more raw and transparent, with no sense of distancing or veiling between the listener and the music.

The lower treble of the SBA-03 is reasonably prominent but not too peaky. With the wrong tips it can be a touch splashy but with a deep seal there is just some sparkle. There is some grain but it is mild. Gentle roll-off at the top completes the picture. Admittedly, the Etymotic HF5 is cleaner and again slightly more detailed in the treble but the two earphones have opposing profiles for a pair of single BAs, with the SBA-03 emphasizing the bass and midrange more so than (much of) the treble region.

The presentation of the SBA-03 is competent but not flawless  Most noticeable when switching over from a higher-end monitor such as the GR07 or ACS T15 is the in-the-head positioning of all the sonic cues. The SBA-03 does have nice instrument separation and accurate positioning across its stage but the sheer expanse of earphones such as the GR07, ACS T15, Sony EX600, or JVC FXT90 is just not there. The soundstage of the SBA-03 is average or even slightly above-average in size but the earphone achieves neither the air nor the ambience of the pricier monitors in my collection.

One last point worth noting – the SBA-03 is a very efficient earphone with high sensitivity and low impedance. Powerful sources such as the Cube C30 can be too loud even on the lowest volume settings and computers and other sources with a less-than-black background or high output impedance will be noisy. For a set of general-purpose computer earphones the similarly-priced Tandem does a much better job – it is less sensitive and more forgiving.

Value (8.5/10) –  The MEElectronics A161P holds its own in many ways against higher-end products from the likes of JVC, ACS, and VSonic. Aside from the smallish headstage and average dynamics, it is easily a top-tier performer. What detracts from its value are the surrounding bits such as the stringy cable. Those willing to overlook these minor flaws will find a direct competitor to the Ety HF5 and Phonak PFE with more emphasis on the bass and midrange and less on the top end – a versatile signature and a great introduction to higher-end BAs.