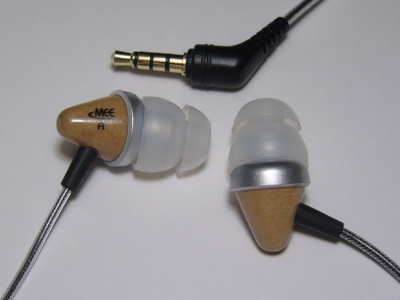 Accessories (4/5) – Single-flange (3 sizes), bi-flange, and triple-flange silicone tips, shirt clip, and zippered carrying case
Build Quality (4/5) – The housings of the CW31 are lightweight and quite small, made partly out of a light-colored wood and partly out of plastic. The nozzles are oval in shape (which I’ve only seen once before on the ATH-CK6) and protected by a fine mesh filter. The cable is well-relieved, smooth, flexible and terminated with a new lower-profile 45°-plug
Isolation (2.5/5) – The design of the CW31 allows only the nozzle to be inserted into the ear canal but the included bi-flange tips provide reasonable isolation
Microphonics (4/5) – Typically low but the CW31 cannot be worn over-the-ear so cable noise is difficult to eliminate completely
Comfort (4.5/5) – The fit of the CW31 is fairly similar to the other half in-ear earphones but it is smaller and lighter than most. In addition, the tapered housings prevent the CW31 from putting pressure on the outer ear, making it very easy to wear for prolonged periods

Sound (6.7/10) – As the middle earphone in Meelectronics’ clarity series, the CW31 really doesn’t differ a whole lot from the lower-end CX21. In a nutshell, the CW31 adds extra bass and a noticeable bit of warmth to the balance of the lower-end model. The bass is still quite controlled but the CW31 has better depth and power at the low end. The bass is more full-bodied and the notes are given a pleasant warmth and roundness compared to the cooler-sounding CX21. In terms of impact, the CW31 still lags behind Meelec’s M-series models but falls closer to the Brainwavz M2 than it does to the M1. As with the CX21, there is a bit of bass detail and texture missing compared to the higher-end A151 and CC51 models but for the price the bass performance is quite competitive.

The small increase in bass quantity over the CX21 results in some warm overtones being added to the midrange of the CW31. Clarity is still very good, however, and the midrange is no more recessed than that of the CX21. Detail and texture are similar as well – just a tad below what the Maximo iM-590 and Brainwavz M1 are capable of but a bit better than with the Meelec M6 or Dr Dre Beats Tour. On the whole, the warmer CW31 sounds a little thicker and more fluid than the CX21 but the difference likely won’t be noticeable unless the two are compared head-to-head. The treble of the CW31 is neither harsh nor sibilant unless the track calls for it and appears to be just a tad softer than that of the CX21. Fine detail is still missing at times but top-end extension is quite good.

In terms of presentation, the CW31 is slightly more well-rounded compared to the lower-end model. While the CX21 has better separation and a bit more width, the CW31 seems a touch more spherical and enveloping. Neither earphone has the positioning accuracy of the A151 but the CW31 does seem to have a little more depth to it, partly as a result of the fuller, more powerful low end. The timbre and tone of the CW31 seem a little more natural as well though the earphones really aren’t radically different on that count.

Value (8.5/10) – The MEElectronics CW31 is yet another solid entrant in the sub-$60 market segment, offering a minimalistic design, comfortable form factor, decent build quality, and a microphone option all for not very much money. For those who don’t mind sacrificing some isolation and like a bit of warmth and bass boost to their sound, the CW31 is likely worth the price premium over the lower-end CX21 but both earphones deliver clear, accurate sound and the kind of real-world usability we’ve come to expect from Meelectronics products.