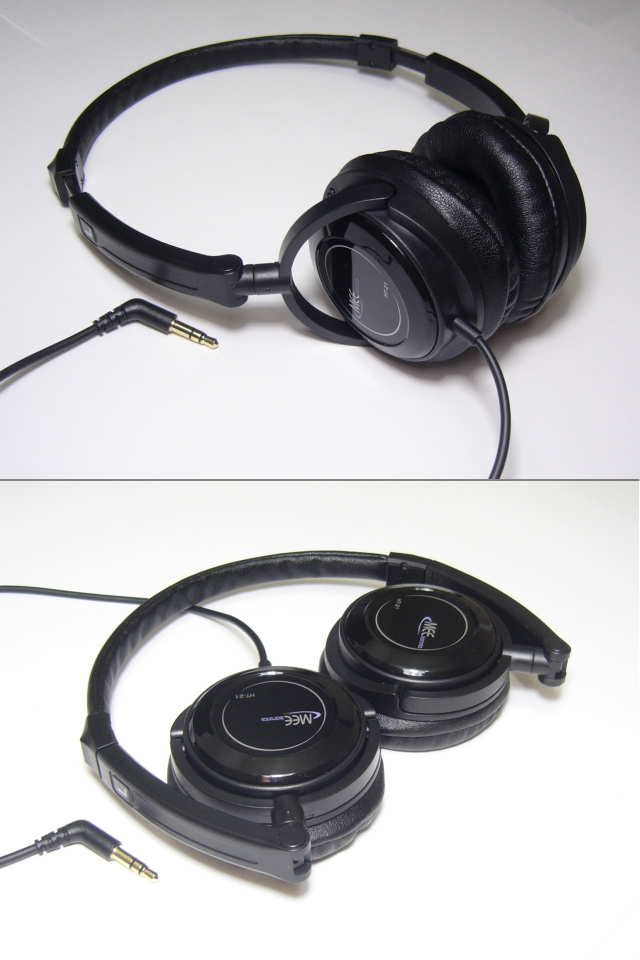 Build Quality (6.5/10): The HT-21 is a compact supraaural headphone similar in size to the Panasonic RP-DJ120. One thing that sets it apart is the single-sided attachment of the cable – something rarely seen in small budget headphones. The cord itself is slightly thicker than average. The hockey stick-shaped 3.5mm plug is similar to those found on some of Meelec’s IEMs and provides a good compromise between the more durable L-plug and the more convenient (at least for some devices) I-plug. The construction of the headphone itself is mostly plastic, with stainless steel used for the headband. The glossy finish of the cups does retain fingerprints but they are hardly visible on black. The folding mechanism is reminiscent of the AKG K430 and provides plenty of adjustment axes.

Comfort (9/10): The pleather used on the pads and headband is of the thicker variety similar to that used by Audio-Technica headphones – namely the ATH-ES7 and ATH-FC700. The headband padding is quite thin but the headphones are light enough that it isn’t a problem. Clamping force is quite low and the multi-axis folding system allows the HT-21 to conform to the wearer’s ears comfortably at all times. Being supraaural the HT-21 never quite disappears completely but remains inoffensive for as long as I wear it. An additional plus is the 1.3m cable length, which feels much less constrictive than the 1.1m cord on the similarly-sized AKG K430 even with my (average) height.

Isolation (5/10): Being a medium-sized supraaural headphone, the HT-21 is hardly noise-isolating despite the closed design. Much of the isolation is traded off for comfort with these, though they are superior to open sets in isolation and especially leakage.

Sound (6.5/10): Like Meelec’s multitude of reasonably-priced in-ear models, the HT-21 makes no attempt to hide the fact that it’s a budget headphone when it comes to technical capability. The headphones are not the most resolving and lack a bit of detail and dynamic range compared to pricier sets like the AKG K430. On the whole the HT-21 is an aggressive headphone with impactful bass (for a small supraaural can) and slightly forward mids. The low end is controlled and quite accurate. The bass isn’t the most extended but there’s a fair amount of punch and good texture throughout. Impact is well ahead of that provided by the Soundmagic P20 and the HT-21 can take far more bass boost on the equalizer before distorting. The Audio-Technica FC700, on the other hand, has better depth and a touch more impact but sounds significantly muddier, boomier, and slower than the HT-21. In addition, the FC700 has its midrange, especially vocals, obscured by the low end on bass-heavy tracks while the forward mids of the HT-21 work to prevent such obtrusions. The balance and overall sound quality of the HT-21 is much closer to the higher-end ATH-SQ5 than the entry-level FC700.

The midrange of the HT-21 is crisp and clear. The headphones lean slightly towards the cool side of the spectrum on the whole. Clarity is similar to the Soundmagic P20 – very impressive for a <$40 portable set. The slightly forward presentation and good clarity of the Meelecs mean that there is no veil over the midrange, making the softer-sounding Maxell DHP-II seem ‘blanketed’ in comparison. As presented by the HT-21, vocals lack some fullness but guitars have plenty of presence and ‘bite’. The HT-21 is quite energetic on the whole so those looking for a laid-back listening experience should be looking elsewhere.

The treble of the HT-21 is similar to the midrange but a bit less forward. It is crisp and clear. Extension is decent. The HT-21 is a fairly well-balanced headphone on the whole and the treble works to balance out what would otherwise be a slightly warm signature. There is a bit of unevenness in the lower treble that results in the HT-21 accentuating the harshness and sibilance in some recordings, especially at high volumes. Properly-mastered tracks usually sound fine.

The soundstage of the HT-21 has surprising air for a closed set but layering is mediocre and depth is lacking compared to many open sets. The overall sense of space is still quite decent, especially next to similarly-priced closed sets. The Soundmagic P20, for example, is made to sound distant in comparison. On the whole the HT-21 is not something one would purchase for the soundstage alone – its true strengths lie in clarity and bass control – but as a secondary characteristic the spacious and airy presentation is quite enjoyable.

Value (8.5/10): Yet another reasonably-priced piece of portable audio equipment from Meelectronics, the HT-21 is a set that places as much emphasis on convenience as it does on sound. Lightweight and comfortable, it will easily fit into a laptop bag or simply rest unobtrusively around the wearer’s neck. Clamping force is fairly low, resulting in average isolation, but the HT-21 stays in place securely. The construction of the headphone is solid too, with above-average quality of plastics and a simple folding mechanism. The sound quality won’t land them in direct competition with any high-end portables but puts up a good fight against budget-minded competitors from mainstream brands. The balance is skewed very slightly towards the bass and upper midrange, with punchy, controlled notes down low and energetic guitars and vocals. All in all the HT-21 is a great headphone for those who can enjoy a prominent upper midrange or who listen at moderate volumes like I do. In my opinion the HT-21 is another budget set done right by Meelec but, as always, be mindful of the signature before buying.

My full review for the HT-21 can be found here.