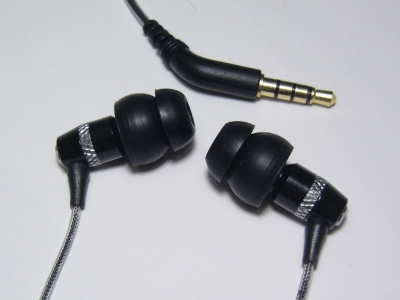 Accessories (4.5/5) – Standard single-flange (3 sizes), elongated single-flange (3-sizes), short bi-flange (3 sizes), and standard bi-flange silicone tips, cord wrap, airplane adapter, shirt clip, and hard clamshell carrying case
Build Quality (4.5/5) – Unchanged from the old M11, and with good reason – the build of the M11 earphones is sublime. The housings are all-metal and feel very solid. The cabling is typical Meelec – long, thick, and flexible, and the hockey stick-shaped 3.5mm plug is adequately protected
Isolation (3.5/5) – Slim housings lend themselves well to deep insertion and the new fit kit makes getting the perfect seal easier than ever before
Microphonics (4.5/5) – Very low when worn cord-down; nonexistent otherwise
Comfort (4.5/5) – About as good as conventional straight-barrel IEMs get. The housing is tiny but easy to grip when inserting/removing and the extensive fit kit should make finding the right tips quite easy for almost anyone

Sound (5.8/10) – Despite the excellent design and functionality, the sound quality of old Meelec M11 was always just a bit disappointing when juxtaposed with the physical attributes. With the M11+, Meelec attempted to finally give the M11 housings the drivers they’ve always deserved. Though the overall tone of the M11+ is similar to the popular M9 and M6 models, the signature has undergone some drastic changes. First off, the M11+ is rather bass-heavy. The low end is controlled and extended but carries enough impact to rattle the brain loose. When bass is present on a track, it is nearly always dominant with the M11+. The small drivers don’t move much air, which makes the bass impact all the more jarring, and the motion of the driver itself can be carried through the housing on certain tracks. Occasionally I found myself bumping down the lower bands of my equalizer to evaluate the midrange properly, which isn’t to say that the mids are recessed – the M11+ is less V-shaped than the M6 tends to be – but the low end really draws attention to itself and, on rare occasions, can almost completely overshadow the lower mids.

Though the M11+ is slightly more balanced than the M9/M6, the midrange still gives some emphasis up to the bass and treble (but not enough to be called recessed). It is strong and smooth and the tone is quite neutral, if not particularly natural. I wouldn’t call the mids of the M11+ transparent, either, as they have a thickness to them that may or may not appeal to the individual listener. Clarity and detail, on the other hand, are very good and easily one-up Meelec’s renowned M6 model. Especially on bass-light tracks, the mids and treble of the M11+ impress with their crispness and overall competence. That said, the treble of the M11+, while not often harsh or sibilant, sounds a bit edgy to my ears, not unlike that of the Hippo VB. A lack of dynamic range exhibited by the small drivers doesn’t help and the earphones sound ‘shouty’ on certain tracks. Not a bad sound for pop or electronica but a few of my rock and jazz tracks made me wish for more subtlety. Top-end extension is quite decent and the treble detail stays strong all the way to the roll-off point (in contrast to the Westone 1 I’ve been using lately). The M11+ is definitely no RE0 but it does compete well with the majority of <$80 dynamics when it comes to detail and clarity.

Much like the sound signature itself, the presentation of the M11+ is not technically perfect but has its own appeal. While the M11+ simply lacks the sheer expanse of something like the Fischer Audio Eterna, soundstage width and depth are both adequate. Stereo separation is excellent and the sound is mostly well-layered, though the bass can step out of line on occasion. I had the chance to switch between the M11+ and the similarly-bassy but slightly cheaper Sennheiser CX281 and the Senns just sound completely flat in comparison, as if all of the instruments are equidistant from the listener. Positioning and imaging suffer slightly from the thickness of the M11+ but I wouldn’t call the earphones congested. Airiness is lacking slightly compared to the entry-level M9 model as well. Tonally, the M11+ is hard to place. It doesn’t sound all too dissimilar from the M6, though the heavier bass balances out the treble brightness better on the M11+. Some instruments don’t sound entirely realistic but using the M11+ exclusively for a couple of days ‘fixes’ this.

It should also be noted that the specs of the M11+ are deceivingly mild – in reality, the M11+ likes power far more than an earphone with a mere 16Ω of impedance should. Hooking them up to an amp really loosens the drivers up – dynamics and soundstaging undergo the biggest improvements but the whole spectrum becomes just a little bit cleaner and tighter with my mini3 and Music Valley RC-2. I am still vehemently opposed to the idea of purchasing a mid-range amp for entry-level earphones but if you have on lying around, might as well try running the M11+ through it. The difference won’t be night-and-day but it’s noticeable.

Value (7.5/10) – Engineered to correct the sub-par sound quality of Meelec’s flagship, the M11+ competes well with the aging M6 model in sound quality and boasts the superb ergonomics and aesthetics of the original M11. The sound of the M11+ offers up hard-hitting bass and crisp and edgy treble. For those who really like their bass impact, the sound of the M11+ should be plenty enticing but the earphones just can’t quite match the realism of the pricier competitors from brands such as Head-Direct and Fischer Audio. Those who do settle on the M11+ should be pleased with the massive fit kit as well as the comfort and build of the earphones. As a total package, the M11+ is a worthwhile buy but, being priced into a much more competitive tier than any of Meelec’s previous earphones, it just doesn’t shame the competition with audio prowess the way the M9 and M6 did upon release.