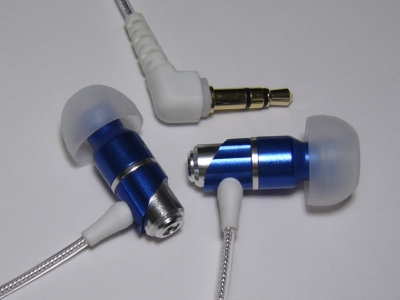 Accessories (4/5) – Single-flange (3 sizes) and bi-flange silicone tips, shirt clip, and clamshell carrying case
Build Quality (4.5/5) – The build is similar to the older M11/M11+ models although the M21 is a bit larger. The housings are all-metal, the cabling is sturdy and well-relieved, and paper filters protect the nozzles. The low-profile L-plug is a welcome change from the 45-degree plug of the M11
Isolation (3/5) – Fairly average due to large rear-facing vent
Microphonics (4.5/5) – Very low when worn cord-down; nonexistent otherwise
Comfort (4/5) – The M21 is a bit larger than the older M11+ and the fit kit isn’t as extensive but it’s still a very comfortable straight-barrel earphone. With deep-sealing tips I even managed to sleep in them, which I can’t say for the larger M31 model

Sound (5.9/10) – The sound of the M21 carries a slight emphasis on bass consistent with the other models in Meelec’s M-series but the overall balance of the earphones wouldn’t put them out of place in the clarity series, either. In terms of quantity, the bass of the M21 falls closer to the balance-oriented CX21 and CW31 models and lags noticeably behind the significant amounts of bass boost offered by the M6, M11+, and M31. There is some sub-bass roll-off and most of the emphasis is on the mid- and upper bass regions. The bass is rumbly and a bit soft in character – much like that of the M31 but not nearly as voluminous and less ‘boomy’ as a result. The M6 and M11+ sound quite a bit more aggressive in comparison. Overall, I would say that bass control is decent-to-good and mid-range bleed is not significant enough to be distracting.

There is no significant drop in emphasis when moving from the bass to the midrange, which gives the M21 a leg up in balance on the bass-monster M11+ and the v-shaped M6. If the M6 is recessed in the mids, the M21 is recessed (or, to put it in more positive terms, laid-back) across the range. The mids are similar in quality to the M11+ – a bit dry and thick in character and not as clear or detailed as those of the CX21 but still quite adequate in the context of the sound signature. To be fair, the CX21 does emphasize its midrange more than the M21 does and needs the extra bit of detail and clarity to avoid appearing muffled.

As is the case with the M11+, the treble of the M21 is not notably harsh or sibilant but doesn’t ooze smoothness, either, especially at high volumes. On some tracks the earphones appear a bit edgy but much of the time the treble is a bit laid-back, which provides a nice contrast to the more aggressive treble of the M6 and M11+. Compared to the M6 there’s a drop in sparkle and airiness as a result of the slightly more relaxed treble presentation but extension is still decent. The overall presentation falls somewhere between the M6 and M11+ – the M21 can be quite wide and airy-sounding but still doesn’t quite keep up with the large headstage and immersive 3D feel of my M6. On a couple of tracks the M21’s ability to portray distance threw me off guard but in general its presentation is best described as ‘well-rounded’. In fact, I think ‘well-rounded’ describes the whole earphone rather well. It should be noted that as with all of the M-series earphones I have heard, the M21 sounds best at lower volumes. It’s also, as far as I can tell, less sensitive than any of the other M-series earphones.

Value (8.5/10) – The Meelectronics M21 took me by surprise as a bit of a sidestep from the generally more bass-heavy M6, M11+, and M31 models. While the bass is definitely above baseline on the M21, the earphone still possesses decent balance and really doesn’t do a whole lot wrong for a set aimed at the mainstream market. Though it doesn’t have the wide headstage of the M6 or the midrange clarity and detail of the M11+, the more well-rounded M21 may just be my favourite M-series model regardless.

Pros: Well-built and easy-to-use; sound signature is solid all around
Cons: Yields to other Meelec models in specific sonic traits