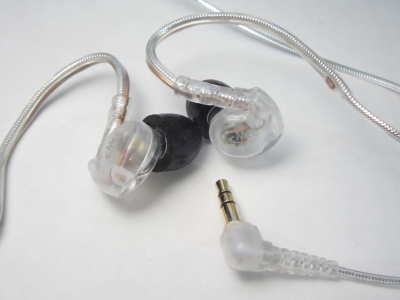 Accessories (4/5) – Hard clamshell carrying case, shirt clip, silicone single-flange (3 sizes), bi-flange, and tri-flange (2 sizes) silicone tips
Build Quality (4/5) – Solid-feeling plastic housings are coupled with Meelec’s excellent new cabling terminated with a low-profile L-plug. Two inches of memory wire provide additional strain relief
Isolation (3/5) – By design they cannot be inserted too deeply, but still provide average levels of isolation
Microphonics (5/5) Over-the-ear fit and excellent cables, coupled with an included shirt clip, make microphonics nonexistent
Comfort (4/5) – Comfort itself is quite good but getting them fitted initially can be difficult due to the memory wire. If necessary, memory wire can be removed with a bit of knifework

Sound (5.7/10) – Despite sharing a basic signature with the lower-end M9 model, the MEElectronics M6 is superior in every way except airiness. They are more detailed and have good extension on both ends. Soundstage and positioning are good for the price. Clarity across the range is also impressive, with decent bass control and nice sparkle at the top of the range. There is a mid-bass hump but it’s hardly distracting and doesn’t detract much from the overall balance. Bass depth is still good and the mids are still free of bleed.

The treble is also quite pronounced, leading to a somewhat V-shaped signature. Happily, it’s not as harsh as the treble of the M9. The presentation is good for the price as well. On the whole, the M6 provides a very good all-around sound at the price point and can please both critical and casual listeners.

Value (9/10) – Taken as a total package, the Meelec M6 is a steal – Techno/Trance and Electronica listeners need not look any further, but nearly everyone is sure to be impressed with the combination of sound and comfort at the price point. One of my favorites in its class.

Pros: Well-built, comfortable, great sound
Cons: Can be tough to get fitted at first