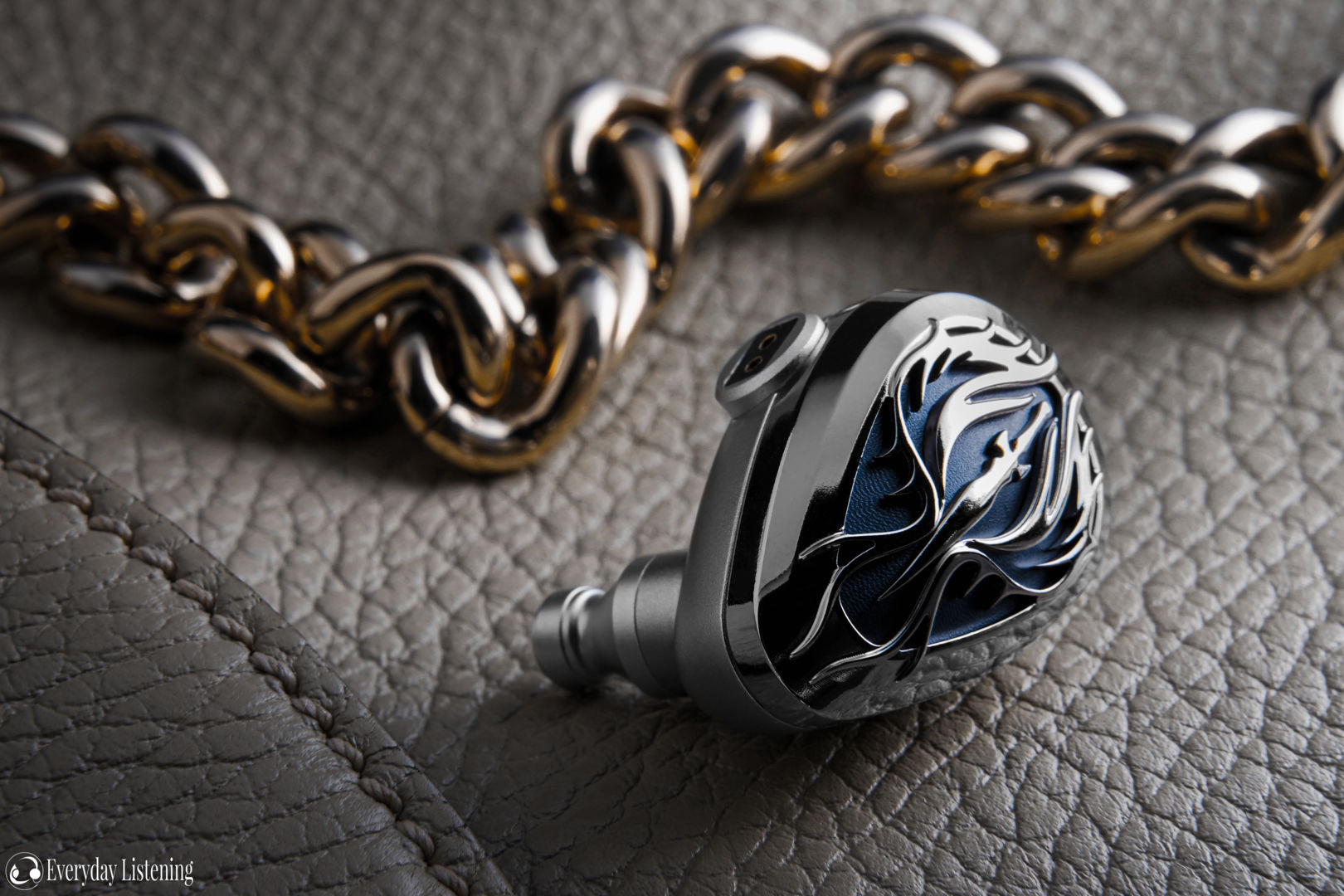 This earphone quite surprised me on first listen. It offers sound tri-frequency balance in addition to a powerful, warm and full-bodied voicing. While it is characterised by its exemplary coherence, imaging acuity and reinforced note structure, the Balmung simultaneously achieves impressive vocal definition and extension on a whole. I was curious how this was achieved; usually, I can get a good idea of the tuning before measurement, but I was quite surprised by the Balmung’s frequency response. It was not nearly as even and linear as I had expected given its focus on coherence in subjective listening.

Instead, what can be observed is a big, warm bass and sizeable lower-mid trough for midrange separation. Bass intentionally colours the mids, imbuing the aforementioned qualities of warmth and fullness, yet it does so without introducing any semblance of muffle or congestion due to the lower-mid dip that introduces strong definition and increases separation. It’s a risky play and a delicate balancing act to perfect. Thankfully, and as one would hope at this price point, Joseph’s hard work has paid off, as the Balmung manages to nail this balance with aplomb.

I think the long-held belief that BA drivers can’t produce a satisfying or substantial bass response has long since been dispelled. Joseph has always been able to extract an admirable performance from these drivers and the Balmung is his most fun and bombastic IEM to date. While it maintains plenty of weight and presence in the sub-bass, this remains a mid-bass focussed IEM to my ears, delivering a grand, warm and very full note structure. And, this is its immediate standout feature, providing some of the most visceral impact I’ve heard from an in-ear. Pressure and overall texture still aren’t on the level of a dynamic driver, however, the Balmung will leave few wanting for rumble and slam with surprisingly strong extension and even some pressure which is incredibly rare to feel from a BA monitor. Its notes are big, slightly emboldened and also slightly round. The sheer level of mid-bass does mean some bloat is evident, but bloom, muddiness or smearing of small details are non-issues due to the articulate note presentation.

The midrange and treble sitting in relative balance should not indicate the Balmung has a neutral bass voicing in any regard. Yet, even despite its tuning, this is a surprisingly articulate performer. Indeed, it is warm and full but without the fuzz, you usually hear with this style of tuning; the Balmung has a very well-defined note presentation throughout. The BA design is surely pivotal here, permitting a tight, keen attack and very swift decay that upholds a convincing sense of pace and timing even on complex tracks. The downside to this style of presentation comes when scrutinising fine textures. While I would consider the Balmung to possess a very responsive and defined mid-bass, the sheer fullness means separation is just ample through the low-end. In addition, the quick decay necessitated by its fullness saps the rich texture you would find on a high-end DD or hybrid monitor. Do note that these comments are relative to the very best and, even by comparison to its esteemed peers, the Balmung revels in its ability to create a super tight, physical impact in the mid-bass like very few others.

The beauty of Joseph’s creation is that he was able to pull off such a ridiculous bass without the midrange and treble sounding wonky or recessed. In fact, I would suggest the midrange is one of the most likeable aspects of this earphone so long as you don’t mind a coloured tonality. The midrange sits in good balance with the bass and only a touch behind on bassy tracks. Vocals shine in the spotlight and are never over-shadowed while midrange instruments take a step back. This is instigated by a substantial lower-mid nadir followed by an enhanced 2-3kHz range and lifted articulation around 5kHz. The earlier bump at 2kHz means that both male and female vocals are brought forwards and enlarged with only a slight bias towards the latter.

Meanwhile, the 3kHz prominence contributes to surprising clarity without introducing strain or intensity – especially with small 4kHz nadir. Vocals are large, slightly intimate and highly resolved, they are warm but not overly roomy or chesty. The lower-mid nadir contributes to this and also wasn’t as contentious as I had expected. Of course, the Balmung is not quite as consistent track to track as a more linear tuned IEM but I persist that this is a superb balancing act on MMR’s behalf as all aspects feel well compensated. There was the rare track where the heightened contrast manifested as a slight hollowness on male vocals, but this isn’t something that I feel holds the IEM back overall. I never experienced dryness here as they derive body and a euphonic, medium warmth from the boosted low-end.

The net result is almost perfectly balanced, medium warm and organic but very naturally voiced on the vast majority of tracks and well-resolved. Though undoubtedly coloured, the midrange sounds clear and nicely separated with palpable air surrounding each element. At the same time, the midrange has a rich, organic timbre imbued by the bass bump, ensuring their enlarged vocals are perfectly filled-in, powerful when called for and all the while avoiding the slightest inkling of veil or congestion. The lift in articulation never manifests as thinness or head-voice bias due to the lift in power and body. Raw midrange resolution performs near the highest level though certain competitors do benefit from their more revealing tonalities. Accordingly, should you enjoy a well-structured and powerful sound that upholds strong resolving power, the Balmung is a rare offering.

No TOTL IEM is complete without a highly resolving and extended treble, the Balmung thankfully doesn’t fall short here either. Following their small 4kHz nadir, treble receives a 5kHz bump that sits in line with the midrange. In turn, it doesn’t come across as sharp or overly isolated and sibilance isn’t a concern here either. This bump serves rather to bring treble instrument presence in line with the rest of the sound. The voicing is slightly on the crisp side, but instruments also carry a convincing sense of body. I was very impressed by the transient response on the Balmung which contributes to this impression, delivering a highly defined leading edge and keen separating ability even on complex passages. It does so without truncating texture or over-sharpening the image. The Balmung sounds highly defined yet devoid of fatiguing properties in the treble. Above lies a jet-black dark that provides awesome contrast to its highly resolved foreground.

This gives it a smooth character with a creamy delivery of backing vocals and very well delineated layering though it also means this isn’t an especially open or airy sounding monitor. It is not to be mistaken for a dark or closed-in monitor that said, as the Balmung does have a small upper-treble bump alongside impressive extension meaning it is able to retain strong background detail retrieval that contributes to a very immersive sense of dimension and distance. I do think this is one area where some competitors do noticeably outdo MMR’s flagship. However, as always this is a trade-off as increased sparkle and background detail retrieval usually comes packaged with a brighter sound that may not be to everyone’s tastes. The Balmung is clearly on the smooth and contrasted over revealing and airy side. And if you do crave an immaculately clean sound with excellent foreground detail retrieval and imaging acuity, the Balmung has few equals.

Another defining trait of Joe’s designs to date has been the soundstage performance. The Balmung is an intriguing performer here as it isn’t nearly as overtly spacious as the Thummim, or many competitors for that matter. Instead, it offers reasonable stage dimensions, a good sense of depth but width just past the periphery of the head. The highlight here is its outstanding imaging performance achieved through a combination of a sharp, snappy transient response, highly accurate localisation and excellent layering and organisation. The centre image is rock solid, and the Balmung is able to create a precise sense of location across both lateral and coronal planes which contributes to a very multi-dimensional image.

Holography is glimpsed but is usually held back by its full and warm voicing which means there isn’t much space around each note. It also discerns between individual layers incredibly well. Though on the intimate side, chiefly in the midrange, the Balmung is a highly cohesive and organised monitor. Separation is likely its weakest all-around characteristic due to its full-bodied nature and limited stage dimensions and air. I noted on complex, bassy tracks such as “Gorgio by Morodor” around the 6-minute mark some congestion does creep in.

The Balmung has a very low 13-ohm impedance and unspecified sensitivity. Empirically, I would indicate that it is a very sensitive IEM as I have found myself turning down the volume on many of my sources even compared to other high-end IEMs. Unfortunately, this also means it does pick up hiss quite easily.

Given the low impedance and complexity of its crossover, I would posit that the Balmung would be sensitive to output impedance. But I was surprised to find that this wasn’t entirely the case. Switching between the Shanling M2X (1-ohm) and Hiby R6 (10-ohms) revealed a slight tonal shift that could partially be attributed to source colouration. Bass and vocals were slightly more laid-back on the Hiby but highs remained similar. Though not ideal, this is one of the less source sensitive high-end multi-driver IEMs I’ve tested.

The Balmung is an incredibly efficient IEM requiring little in terms of both volume and current. While a lower output impedance is desirable, driving power isn’t too much of a concern due to this. Switching between the M2X and my desktop stack with THX789 revealed very minimal differences in dynamics and even soundstage expansion. The Balmung sounded great from my desktop source but was driven almost equally well by my portable sources.

The Balmung is very easy to drive so long as the output impedance of the source is 2-ohms or below, you will experience zero tonal shift. Even above within reason, the differences are not too substantial which makes them suitable for sources with a slightly higher OI such as certain Astell & Kern or Sony DAPs. Driving power is not a concern at all and they are able to reach ear-splitting volume from almost anything. At the same time, you will want a quieter source as their sensitive nature means hiss will be apparent if not. In terms of source colouration, the Balmung sounds best from neutral sources due to its fuller nature. That said, slightly warmer sources like the M2X weren’t an issue due to its higher tri-frequency contrast if you don’t have any alternative.