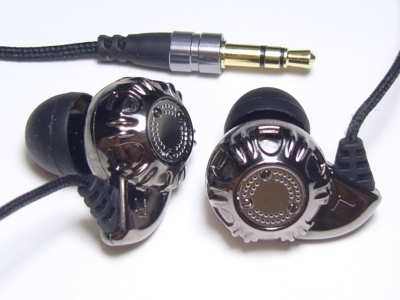 Accessories (0/5) – Single-flange silicone tips (1 size)
Build Quality (2.5/5) – Large housings containing the sizeable drivers are plastic but feel well put-together. Strain reliefs are present all around but the nylon-sheathed cord is fragile, tangle-prone, and lacks a cinch
Isolation (2/5) – Large, vented housings and short nozzles greatly limit isolation
Microphonics (3/5) – Annoying when worn cable-down, not much of an issue with over-the-ear wear
Comfort (2.5/5) – The plastic housings are lightweight but large, thick, and complete with sharp ridges. They seem to be designed for over-the-ear wear but don’t fit those with small/medium-sized ears well. With the cable exit point pointed forward, the cable can be worn straight down or looped over the ear. The nozzle is shallowly angled and not very long, which may make the stock tips useless for some

Sound (7.5/10) – Monoprice specializes in sourcing cheap, high quality parts and offering reasonably-priced alternatives to brand-name products. When it comes to audio quality, the MEP-933 does exactly that, rivaling far more expensive earphones in traits such as balance, detail, and clarity. The bass of the MEP-933 is punchy but far from overblown – I would even hesitate to call the earphone ‘bass-heavy’. Bass quantity is more in line with sets such as the Brainwavz Beta and MEElec CW31 than bassy IEMs like the Dunu Trident and Soundmagic E10. The low end offers good speed and resolution but doesn’t have the greatest depth. Sub-bass lacks texture and fails to portray individual notes well compared to higher-end sets, especially at lower volume levels. Partly to blame are the MEP-933’s average dynamics, which result in a mild case of ‘one-note’ bass. There is also a bit of reverb audible in the plastic housings, not unlike what I experience with Sennheiser’s IE-series earphones.

The midrange of the MEP-933 is crisp and clean – not just for the asking price, but even next to high-end sets. Detail levels are good and though the bass is slightly boosted, the mids are not notably recessed considering that the presentation is distancing on the whole. Vocals are prominent, if a bit thin – those who prefer a thick or lush sound will probably be better off saving up for a Dunu Trident or Xears set. The MEP-933 is still slightly thicker than the Brainwavz Beta and lacks a bit of the detail and transparency of the latter. It is much smoother, however, especially moving up into the treble region.

The top end of the MEP-933 is low on sparkle and not very revealing, but not laid-back enough for the earphones to sound dark. Resolution is decent and the MEP-933 is smooth and reasonably well-extended – more so than many pricier earphones. There is a bit of smearing when things get fast and heavy on the cymbals but nothing to complain about with a lower-tier product. Indeed, minute issues with the bass and treble being noteworthy is a testament to how solid a performer the Monoprice is on the whole.

What’s more interesting is the earphones’ presentation. In contrast to most budget IEMs, which tend to have a congested, in-the-head presentation, the MEP-933 has a wide, airy, and open sound to it. There’s good width to the soundstage but nearly no depth or layering, resulting in poor imaging and a distinct lack of centering ability. The heightened left-right separation gives the MEP-933 a more laid-back, headphone-like feel but also means that imaging and overall positioning ability lags behind not-so-budget sets such as the Soundmagic E10 and Brainwavz M1.

Value (9/10) – Budget IEMs typically follow a simple formula – cheap, straight-barrel housing, high-sensitivity driver, and massively enhanced bass. The Monoprice MEP-933 shrugs such convention – its gigantic shells and equally enormous 14.2mm transducers, over-the-ear fit, and balanced sound signature make for one atypical budget option. There is no doubt that you are getting much more than your money’s worth in sound quality – the MEP-933 is clear, balanced, and detailed unlike anything I’ve heard in or near its price range. Simply put, it has no business sounding as good as it does. Unfortunately, the same can’t be said for user-friendliness – the ergonomics are questionable and the fabric cable is noisy and tangle-prone. Aftermarket tips are likely a necessity as well, and even then the MEP-933 simply won’t work for some users. In the end, it isn’t likely to be the end-all earphone for most, but at least it’s cheap enough to try without any regrets.