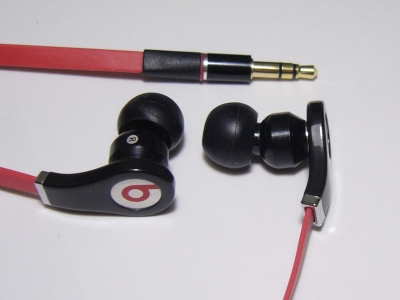 Accessories (3.5/5) – Single-flange (3 sizes) and triple-flange (2 sizes) silicone tips and hard clamshell carrying case
Build Quality (3.5/5) – The housing construction is a combination of different materials, with the driver chamber made of aluminum and attached to a plastic nozzle and stem. The flat cable seems reasonably sturdy and remains tangle-free but unfortunately has no strain relief to protect it from the edges of the stems, y-split, or 3.5mm plug casing
Isolation (3/5) – The long, angled nozzles allow for deep insertion of the Tours. Isolation is very reasonable with correct fitment
Microphonics (4/5) – The flat cable carries less noise than the majority of conventional cords but the Tours are difficult to wear over-the-ear to eliminate microphonics completely
Comfort (3.5/5) – The tours are ergonomically-designed but rather large and limited in versatility by the long and wide stems. In addition, they sound very poor with a shallow fit so deep insertion is pretty much required with the earphones.

Sound (6.1/10) – Being familiar with Monster’s Turbine line as well as the Jamz & Lil’ Jamz, I was hoping that the Beats Tour would stick closer to the original Turbines in signature, especially since the two earphones share a price point. Unfortunately, the Tours, with their highly colored, aggressive signature, are far more similar to the Lil’ Jamz than any of the other Monster earphones. Also like the Lil Jamz, the Beats are less forgiving of a poor seal or shallow insertion than the Turbines or regular Jamz and do not sound their best with the narrow-channel silicone tips that Monster includes – aftermarket silicones such as Sony Hybrids are better. With good tips and a proper fit, the beats are still brighter and more colored-sounding than the Turbines but at the very least show improvement over the signature of the Lil’ Jamz.

The low end of the Beats is extremely strong, putting out more mid-bass than the Turbine but with a touch less impact than the Eterna. The Turbine is slightly more controlled and textured as well but the difference isn’t great. Sub-bass extension is there but the sheer amount of mid-bass often overshadows the low rumble that earphones such as the Hippo VB portray accurately. Detail is closer to other mainstream bass-heavy earphones, such as the Thinksound TS02, but lags behind the Eterna and VB. Ironically, though the Beats are marketed as ‘High Resolution’ earphones, resolution is one of the many things they could use more of.

There’s a small amount of bass bleed distinguishable in the lower midrange but on the whole the mids are crisp and clear. Clarity is slightly better than that of the Turbine and Thinksound TS02 – two earphones that are also significantly warmer than the Beats. Detail is lacking slightly in comparison to the Turbine but the Beats are fairly aggressive and push the detail they do have on the listener, appearing more revealing than they actually are. There is unevenness in the upper midrange and lower treble, resulting in a lot of treble sparkle but also quite a bit of harshness and occasional bouts of sibilance. The Turbine actually has slightly more emphasis on the upper midrange but maintains its composure better and sounds far smoother than the Beats on the whole. Expectedly, the Beats can be fatiguing at times, especially for those with a low treble tolerance. Upper midrange peaks aside, the Beats have surprisingly competent treble – not particularly detailed or textured but with good presence across the range and surprising clarity.

Presentation, however, is where the Beats fall quite flat for me. Despite the plentiful treble sparkle, there’s a slight lack of air, making the Beats sound stuffier than the Thinksound TS02 or Phiaton PS 20. Soundstage width is average but the Turbine still sounds a bit less closed-in. Of course next to an earphone with a truly out-of-the-head soundstage, such as the Eterna or PS 20, the Beats sound quite narrow, but that’s expected. Soundstage depth is average for an earphone in the Beats’ price bracket as well but the separation leaves a lot to desired – layering is quite poor and the presentation of the Beats is somewhat similar to the ‘wall of sound’ that I ran into recently with the Skullcandy FMJ, albeit not as forward and far less offensive on the whole. As a result, the Beats are not ideal for busier, denser tracks – classical, big-band jazz, and heavy metal are clearly not genres Monster had in mind when tuning the earphones. In addition, the heavy coloration of the earphones throws off the timbre – the Thinksound TS02, Turbine, and Eterna all make instruments sound more natural. Lastly, it should be noted that the Beats Tour are more sensitive than either the Jamz or the Turbines and exhibit hiss with some of my more poorly-matched sources, which came as a bit of a surprise as even the top-of-the-range Turbine Coppers do a good job of suppressing hiss.

Value (5.5/10) – The Beats Tour by Dr. Dre were one of the first in-ears released under the Monster brand and remain a practical set for day-to-day use two years later. With a proper fit, which can be more difficult to achieve than with the Turbine and Jamz models, the Beats are fairly comfortable, have decent isolation, and carry little cable noise. Sonically, the Beats Tour are ‘shouty’ earphones, lacking the dynamic range and separation needed for the proper portrayal of musical nuances, but have lots of clarity, bass impact, and treble sparkle. There are genres that they perform relatively well with but even then the signature and presentation of the Beats fatigue me fairly quickly. Those looking for a colored, bass-heavy sound may be better off with cheaper models such as the Thinksound TS02 or Fischer Audio Eterna, or the Turbines for the same money. Additionally, if a deal on the Beats Tour seems too good to be true, it probably is – eBay and most Chinese deal sites are completely flooded with fakes, though I cannot be sure that the real thing sounds significantly better than the counterfeits.