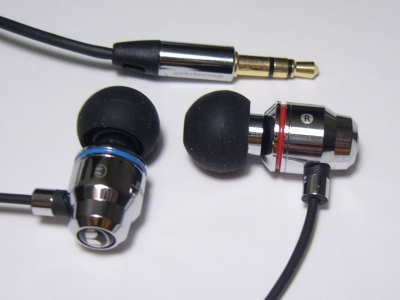 Accessories (3/5) – Single-flange silicone tips (6 sizes), shirt clip, and soft carrying pouch
Build Quality (3/5) – While very solid at first glance, the Jamz really aren’t as well-thought-out as the higher-end Turbine line. The metal housings are heavy and rock-solid but the strain reliefs aren’t flexible and have sharp edges. The cable cinch takes the form of a thin piece of metal and seems like it may sever the cable if pulled on. The cord itself, however, is extremely pleasant to use – soft, rubbery, and flexible. The metal casing of the 3.5mm plug has a tendency to come loose but a drop of super glue should fix it
Isolation (3.5/5) – As with the Turbines and MD Tributes, the isolation is surprisingly good for a dynamic-driver in-ear
Microphonics (3.5/5) – Bothersome when worn cable-down; very low when worn over-the-ear
Comfort (3.5/5) – The housings are larger and heavier than those of the Lil’ Jamz and have a tendency to come loose during physical activity. Fitment depth is very important but the Jamz benefit from a shallower seal compared to the Lil’Jamz and Beats Tour

Sound (6.0/10) – While the cheaper Lil’ Jamz sound like a dilute version of Monster’s Beats by Dr Dre Tour, the Jamz are more reminiscent of the Turbine line with their warm, mid-bassy antics. Unfortunately, the Jamz don’t have the combination of bass depth, detail, and refinement that makes the Turbine earphones special. The bass of the Jamz rolls off earlier than that of the Turbines, resulting in a distinct lack of sub-bass rumble to go with the sizeable mid-bass hump of the Jamz. Interestingly, the Jamz do not benefit from a particularly deep seal, in direct contrast to the Dr Dre Beats Tour. When pushed too far into the ear canal, the Jamz lose bass quantity and body, becoming tinny and slightly anemic in terms of impact. Optimal bass response is achieved with a moderately shallow seal and I actually found myself using larger tips than usual to coax that last bit of impact out of the Jamz. Even when sealed properly, the bass of the Jamz, like that of the Lil’ Jamz lacks a bit of texture and detail. At lower volume levels all that the Jamz produce is a basic mid-bass thump, only differentiating low notes with the volume turned up a bit.

For an earphone with a fair large amount of mid-bass boost, the Jamz have expectedly warm and ever so slightly muffled-sounding lower mids. In contrast to the Lil’ Jamz, there is no bright and prominent treble to counteract the bassy warmth of the Jamz and the mids are thicker and not as recessed. Fine detail is masked slightly by the thickness – the Turbine does a better of job of keeping its low end in check. Treble response is easily the most laid-back among all of the Monster in-ears, with absolutely no harshness, sibilance, or even sparkle present and noticeable roll-off at the top. Depending on the track, the sound of the Jamz alternates between slightly relaxed and downright dull. The nondescript presentation doesn’t help either – the Jamz are neither as forward as the Beats Tour nor as spread-out as the Lil’ Jamz. Again, excessively deep fitment can affect the Jamz negatively, collapsing the soundstage and making them sound less natural, but even with the best fit I was able to find, the presentation is still a bit vague compared to competing earphones such as the Fischer Silver Bullet and ECCI PR401.

Value (6.5/10) – It would seem that the midbass-heavy balance of the Jamz should appeal to the non-audiophile much in the same way the ever-popular Sennheiser CX300 does – the Jamz are not nearly as aggressive as the Beats by Dr Dre Tour and not as bright or tinny as the Lil’ Jamz. Closer examination, however, reveals that the Jamz commit the worst crime of all – complete blandness. Personally, I still like the Jamz better than the more colored Lil’ Jamz and downright offensive Beats Tour, but there is no denying that their sound signature, light on both treble and sub-bass, has a dull, lifeless quality to it. What gives the Jamz some value is the 3-year warranty and their forgiving nature when it comes to poor recordings and low-bitrate rips. If neither of those things are a priority, I would highly recommend looking elsewhere.