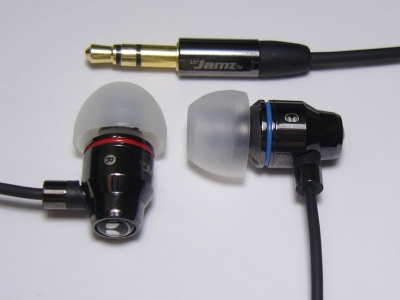 Accessories (2.5/5) – Single-flange silicone tips (4 sizes) and soft carrying pouch
Build Quality (3/5) – While very solid at first glance, the Lil’ Jamz really aren’t as well-thought-out as the higher-end Turbine line. The metal housings are quite heavy and rock-solid but the strain reliefs aren’t flexible and have sharp edges. The cable cinch takes the form of a thin piece of metal and seems like it may sever the cable if pulled on. The cord itself is extremely pleasant to use – soft, rubbery, and flexible – but not as thick as those used on the Turbine earphones. The metal casing of the 3.5mm plug has a tendency to come loose but a drop of super glue should fix it
Isolation (3.5/5) – As with the Turbines and MD Tributes, the isolation is surprisingly good for a dynamic-driver in-ear
Microphonics (3.5/5) – Bothersome when worn cable-down; very low when worn over-the-ear
Comfort (4.5/5) – The housings are heavy but very small and tapered at the rear for a comfortable fit. The flexible cable makes it easy to wear the earphones cord-up or cord-down. Unfortunately, tip selection is not comparable to that of the Turbine earphones with only Monster’s narrow-channel single-flanges included. The Lil’ Jamz are also much more sensitive to insertion depth than the Turbines, requiring a deep seal to sound their best

Sound (5.9/10) – Being very familiar with Monster’s higher-end Turbine line, I was expecting the cheaper Lil’ Jamz to take the sound of the $179 Turbine “Originals” in an even more mainstream direction, adding bass and warmth. Imagine my surprise when instead I heard something cold, clear, and bright to the point of shrillness. The surprising nature of the sound is due in part to the included tips – Monster’s narrow-channel silicone single-flange tips work fine with the bass-heavy Turbines but accentuate the treble peaks present in the response of the Lil’ Jamz. With the stock tips, the Lil’ Jamz always sound as if they are sealed improperly – bass-light, piercing, and boasting excessive stereo separation. The solution is to use thicker, shorter tips with a deeper insertion to make the Jamz sound a warmer, smoother, and more intimate – stock Soundmagic PL30 or Meelec tips worked fine for me. Open-cell foam can be used to the same effect but also cuts down on treble extension very slightly. With generic single-flange tips and a deeper seal, the Lil’ Jamz become usable and, at times, enjoyable. The bass is clearly several notches above baseline in quantity but the Lil’ Jamz aren’t bass monsters. Low notes are impactful but soft and rounded – not particularly tight but not flabby, either. Extension is impressive, easily dropping below 30Hz, and there is no mid-bass bloat but the low end of the Lil’ Jamz still yields to the Turbines as well as direct competitors such as the Thinksound TS02 and ViSang R03 in fullness, texture, and detail. However, more mainstream competitors such as the Sennheiser CX300 and Skullcandy FMJ show the appeal of the Lil’ Jamz to the general populace as a fully-fledged upgrade from these consumer-grade in-ears.

The bass imparts a very slight bit of warmth on the lower midrange but is counterbalanced by the bright and prominent treble. On the whole, the earphones still possess a fairly cool tone. The midrange is slightly recessed and surprisingly clear – perhaps even more so than that of the Turbines – but lacks weight and texture. On the whole the Lil’ Jamz sound fairly thin for a Monster earphone. There is noticeable stridency towards the top of the midrange, which is alleviated slightly with aftermarket tips and putting some hours on the drivers. On occasion the earphones still hit a note jarringly hard for my liking, especially on female vocals.

The treble, too, exhibits some odd traits, namely ringing and resonance that I haven’t heard from an IEM since I sold my Grado iGi. I found the response so uneven that I ran them through a tone generator. I generally only trust my ears to about 6dB so in order for me to call something a ‘spike’ or ‘hump’ it has to be pretty noticeable, and there are definitely several of those between 4 and 12 kHz, giving the Lil’ Jamz an odd ‘nasal’ quality. On the upside, treble extension is decent with the earphones staying strong into the upper 14 kHz range – on-par with the ViSang R03 and a bit poorer than the Fischer Audio Eterna.

In terms of presentation the Lil’ Jamz sound distant and overly separated with the stock tips – like two point sources outside of one’s head. With proper tips they can be made intimate enough to be enjoyable but still don’t have the three-dimensional immersion of something like the ViSang R03 – their sound is more tunnel-like in nature: wide but lacking in height and depth. It is well-separated and the excellent clarity helps with the imaging and air. Overall not a bad presentation that reminds me of the Meelectronics M6 but with a more intense coloration – partly the result of the greater ‘sparkle’ of the Lil’ Jamz.

Value (7/10) – Contrary to my expectations, the Lil’ Jamz are not a low-budget version of the Monster Turbine earphones, offering instead a heavily colored, sparkly sound signature closer to something I’d expect from Denon or JVC. To be honest, I’m very surprised at the positive press that the Lil’ Jamz enjoy on sites like CNET and Amazon – the signature is not what I would consider ‘mainstream’. Regardless, the Lil’ Jamz are another decent, if slightly overpriced, earphone from Monster. The discreet design, unobtrusive form factor, and soft cable make them a pleasure to use while out and about and, while the weak plug casing and poor stock tips detract from the value somewhat, Monster does provide a generous 3-year warranty for the Lil’ Jamz and aftermarket tips really aren’t that difficult to find.