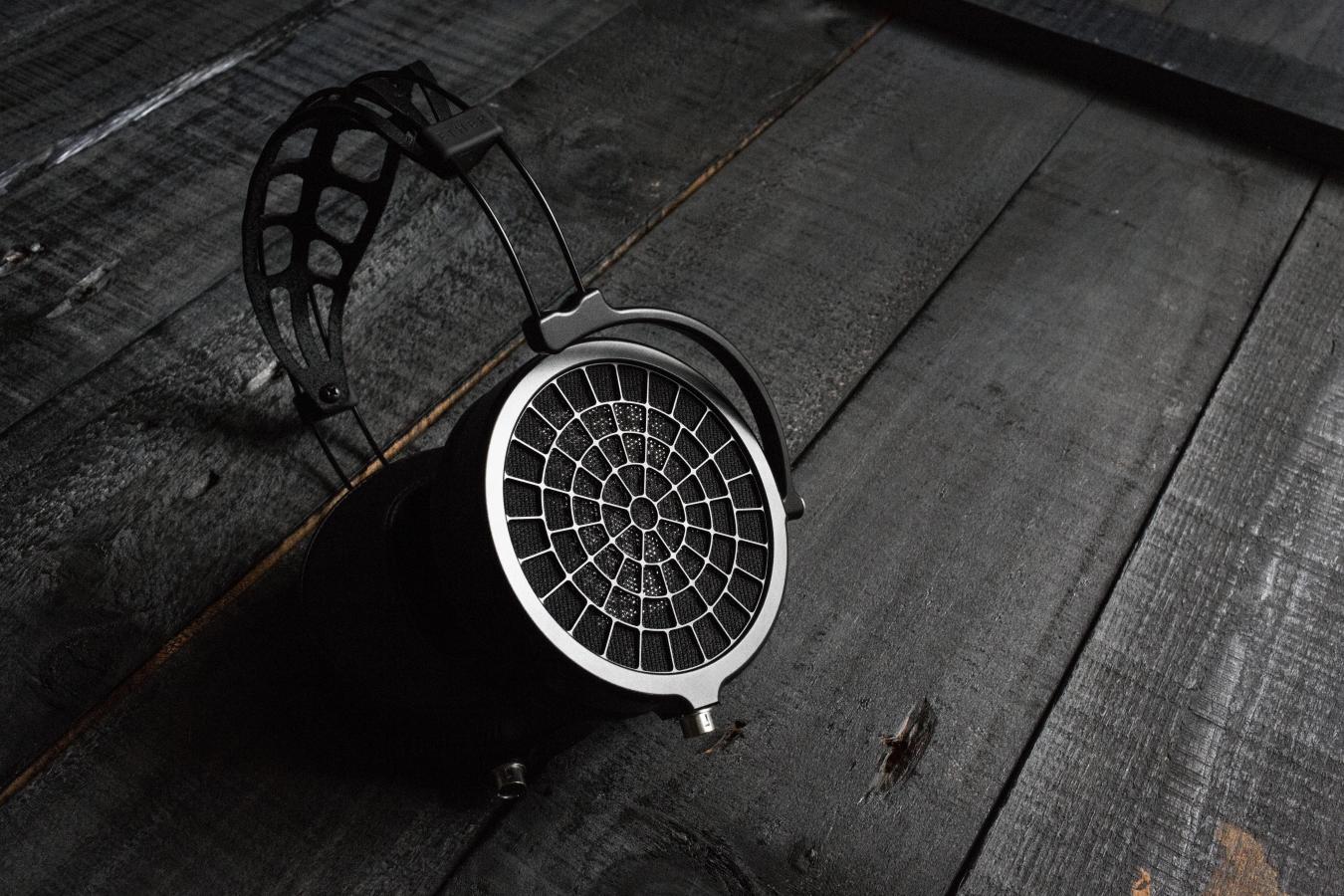 The German flagship is ETHER 2’s most immediate rival. Instantly, the latter strikes me as the more coherent, effortless and natural-sounding headphone. The HD800S becomes a tad disjointed in the treble, where it insists on pushing detail rather than sitting back with the rest of the frequency response. The Sennheiser headphone isn’t harsh by any means, but there’s a clear emphasis on brighter harmonics around 7-8kHz. Instruments have a bright edge to them with varying results. On one hand, transients are crisper and more defined. For example, on Dimas Pradipta’s 9 Grange Road, a rattling ching ring can be heard during a pause around the minute mark. This error (if it is one) is more obvious on the HD800S than it is on the ETHER 2. On the other hand, there’s an artificiality to the sound that the latter entirely evades. 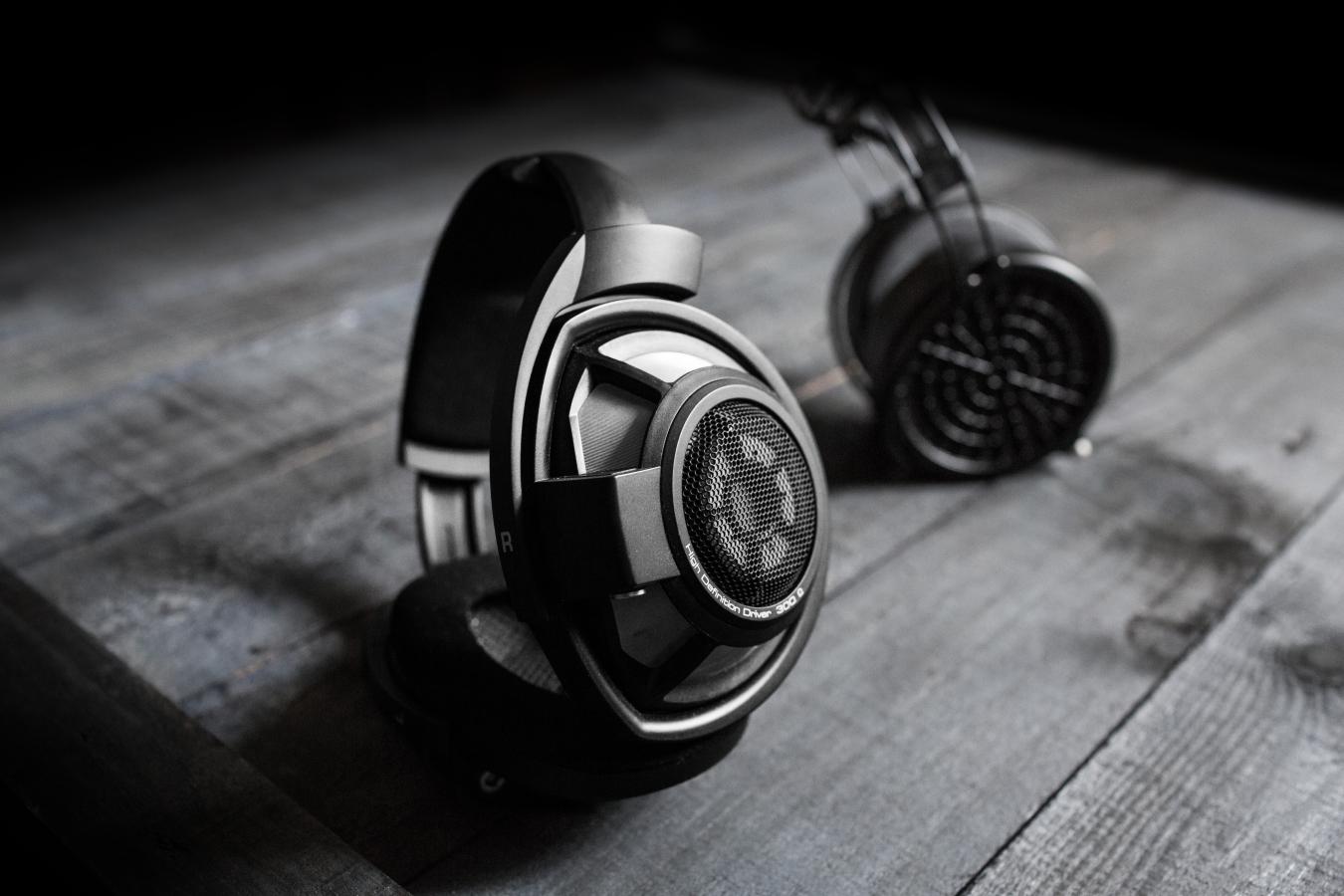 This effect extends to dynamic range as well. Because the HD800S’s transients are constantly excited and in-your-face, the headphone comes across less dynamic than the ETHER 2. Builds, cadences and drops come across with tons more drama and impact on the MrSpeakers flagship, because the energy of the headphone ebbs and flows in accordance to the music. The ETHER 2 maintains a blacker background as well, as its treble decays quicker with less harmonic haze. Another key contributor to this is bass performance. The HD800S competes surprisingly well with its light – yet speedy and punchy – jabs , but the ETHER 2 is the clear victor here. The latter’s arsenal of technologies gift it outstanding extension, resolution, authority and physicality, whilst exerting equal – if not superior – control relative to the HD800S.

In terms of expansion and imaging, it’s neck-and-neck. The HD800S might expand a hair further, but the ETHER 2 posits denser, more full-bodied and more three-dimensional images. Instruments sound more palpable and corporeal. Although the HD800S fares well in this regard too, it does end up sounding a tad two-dimensional by comparison. The midrange, though, is certainly more apples-and-oranges. The HD800S is more exciting, vibrant and engaging, while the ETHER 2 is more even-handed, layered and deep. Again, those who prefer an airier, livelier, more detail-oriented sound will most likely prefer the HD800S. But, if you crave something more balanced, refined and transparent, I believe the ETHER 2 is the more mature headphone – a better reference in any studio or otherwise professional environment.

Speaking briefly on ergonomics, the HD800S is the more comfortable headphone for me because of its far larger ear cups. It also distributes its weight more effectively, while the ETHER 2 is a tad side-heavy. The Sennheiser headphone is more breathable as well. But, it’s significantly more open too, which means it isolates far less noise than the ETHER 2.

Comparing the ETHER 2 to the first of its ilk goes to show just how far Dan Clarke’s grown since 2015. Immediately, the ETHER 1.0 comes across as a punchier, more vibrant headphone; more brash and loud. It has a fuller, more forwardly sound owing to lifts around 300Hz and 2-3kHz. This heavily contrasts the ETHER 2, which dips around 3-4kHz – resulting in its laid-back presentation. But again, that dip has technical benefits as well. The ETHER 2 comes across more refined and restrained, which aids its dynamic range. Similar to the HD800S – except in the upper-mids – the ETHER’s constantly saturated midrange inhibits micro-detail retrieval. Its successor is far superior in terms of headroom, transparency and resolution. ETHER 1.0’s loudness means it’s prone to losing composure, which the ETHER 2 never even comes close to. 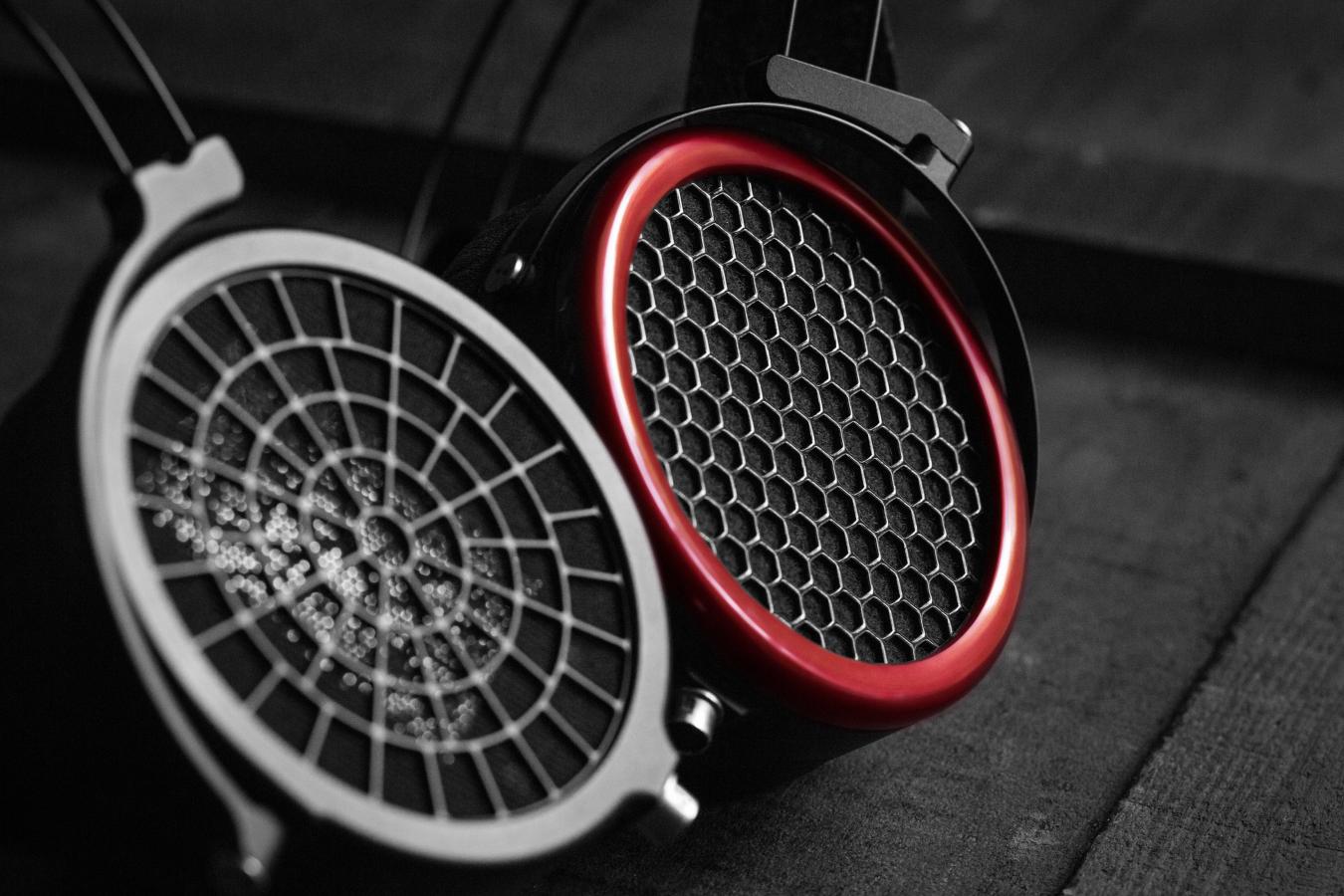 This is especially true when it comes to imaging precision. The ETHER 2 zips past its predecessor in this regard because of several aspects; first of which is linearity. Again, the ETHER’s penchant for vibrancy manifests in its lively, bombastic profile. The images it produces loom large, so much so that they overlap sections of the stage. As a result, you don’t get images that are as compact, tight and defined as those on the ETHER 2. Distortion plays a role in it as well. The ETHER 2 possesses a cleaner profile with stronger layering, micro-detail retrieval and separation – more effortlessly too. Nuances simply pop further on the ETHER 2 onto the forefront of the image. How it manages to achieve this dynamic range whilst maintaining a blacker, more stable background is most likely attributed to top-end extension and reduced distortion.

Finally, comes the low end. The ETHER 2 has a more laid-back and controlled bass response, while the ETHER 1.0 opts for a more harmonic, yet less-defined response. Admittedly, this makes the latter more fun to listen to. Again, there’s a charming sense of cohesive musicality that comes from the ETHER 1.0’s more exuberant signature. But, when it comes down to strict technical performance, the ETHER 2 clearly triumphs – in spite of its more linear, true-to-life delivery.

Between the ETHER 2 and the HD800S lies MrSpeakers’ AEON Open. The AEON Open’s tonal balance resembles the ETHER 2’s in many respects, including a neutral upper-midrange and an articulate (yet un-bright) lower-treble. However, the former departs from its flagship sibling in the lower-mids and upper-treble. The AEON Open has a leaner, more recessed lower-midrange, which gives instruments cleaner definition. Notes are more compact and biased towards the transient (i.e. the leading edge) rather than the harmonic. Additionally, a sparklier upper-treble gives the AEON Open a more exciting, dynamic sound with a more prominent sense of clarity. These two combined yield a presentation that can be succinctly described as crisp, clean and open. The ETHER 2 is relatively more level-headed; laid-back; less contrast-y. 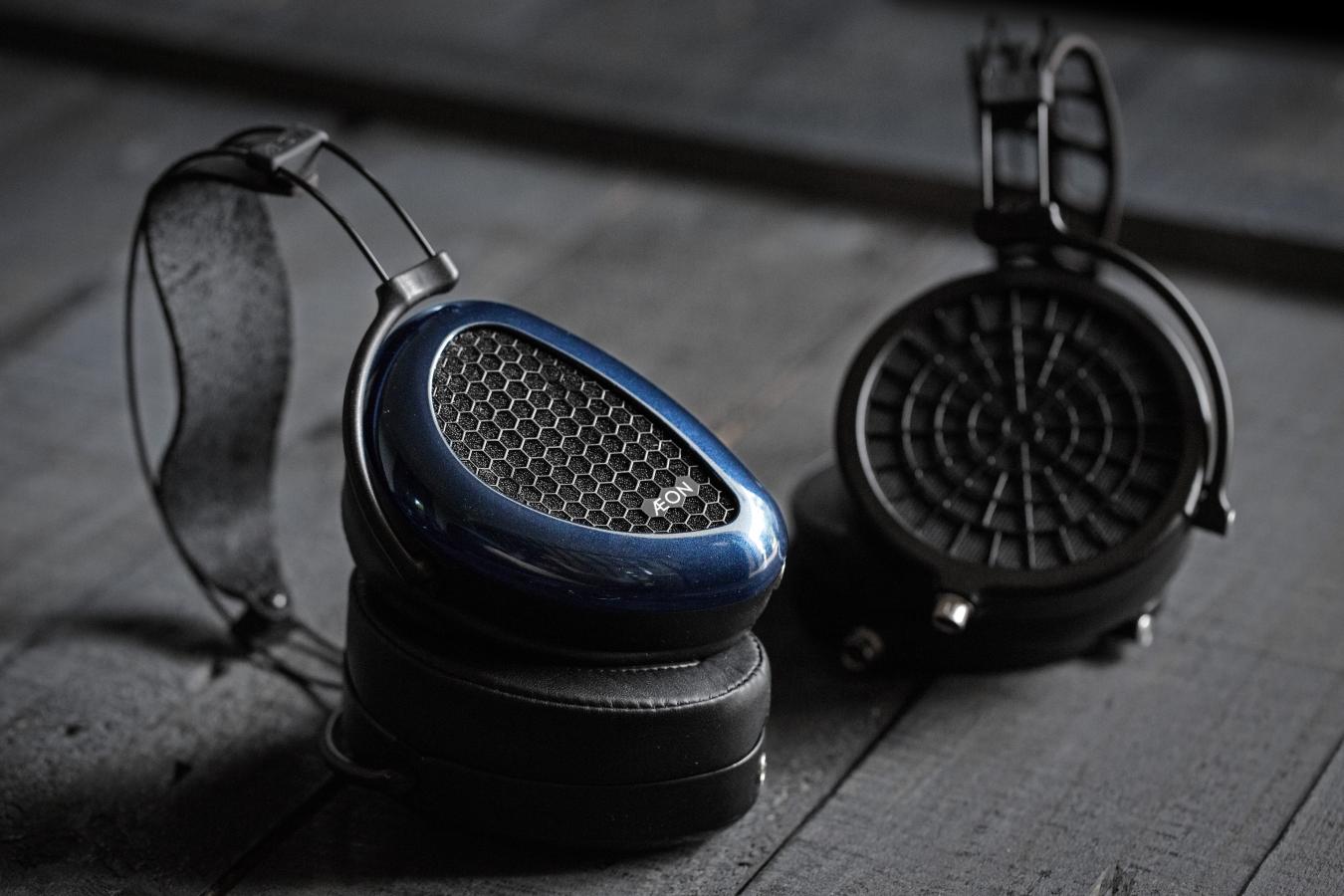 On the surface, the AEON Open might come across as not only the more exciting, exuberant headphone of the two, but the more technically-capable one as well. It’s certainly capable of delivering great, instant gratification by way of vibrancy and detail. However, closer inspection will reveal where the ETHER 2 has the upper-hand. Although the AEON Open performs quite excellently in separation, resolution and control (despite its loudness), the ETHER 2 proves victorious in effortlessness, transparency and imaging precision. Again, like in the ETHER 1.0, the AEON Open’s treble is so vibrant that instruments tend to overlap sections of the stage, resulting in less precise imaging. The ETHER 2 also has a much blacker background, because it supersedes the AEON Open in terms of bass control, top-end extension and overall coherence. Instruments sound considerably more uniform and information comes across much more effortlessly too.

Ultimately, the most obvious differences between the two lies in restraint. The AEON Open is willing to sacrifice a bit of that in order to incite fun and contrast, while the ETHER 2 maintains strict discipline in order to fulfil its role as reference-grade headphones. This is no clearer than in the extremes. The AEON Open has a warmer, bloomy-er, naughtier bass response. It’s certainly fun to listen to, but there’s a clear compromise in definition, clarity and balance. The ETHER 2 fares immensely better in this regard. There’s far more complexity to the bass, it’s more transparent to the source – shifting in texture and tone from one track to another – and it extends further as well. Up top, the AEON Open is HD800S-like with its brighter, crisper timbre. As mentioned previously, this means less composure, linearity and realism for more excitement and clarity. This is why the ETHER 2 comes across more natural, coherent and transparent.

In terms of wearing comfort, the AEON Open takes the cake for me, because of its lighter construction, thicker pads and vertical length. It’s less tight on the head than the ETHER 2, mostly because the headband doesn’t have to extend all the way to achieve a great seal. Again, the ETHER 2’s near-perfect ergonomics are inhibited by lacklustre accommodation towards larger heads. But at the end of the day, this is but a small gripe that’s compensated for in durability and feel.

MrSpeakers’ ETHER 2 epitomises reference-grade; uncoloured, undramatised and pristine in all respects. In an era where wow factor reigns supreme, Dan Clarke and co. have crafted a headphone with a stunningly clear voice – one that lets the music do the talking. Despite how innately it belongs in the professional’s toolbox, the ETHER 2 is compelling for audiophiles as well. Its low-end is one of the most defined, resolved and balanced I’ve heard; as mesmerising to listen to on kick drum stems as they are on Top 40 bass drops. The midrange offers a peak inside the vocal booth with zero fluff. And, the treble is as refined as the intricately-layered soundscape it occupies. Paired with top-class comfort and build, it makes the $2,000 pill just that easier to swallow. It’s not for everyone; nothing is. But – coming from an engineer – if all you want to hear is music in its purest, most unadulterated form, the ETHER 2 truly sits at the top without close contest. 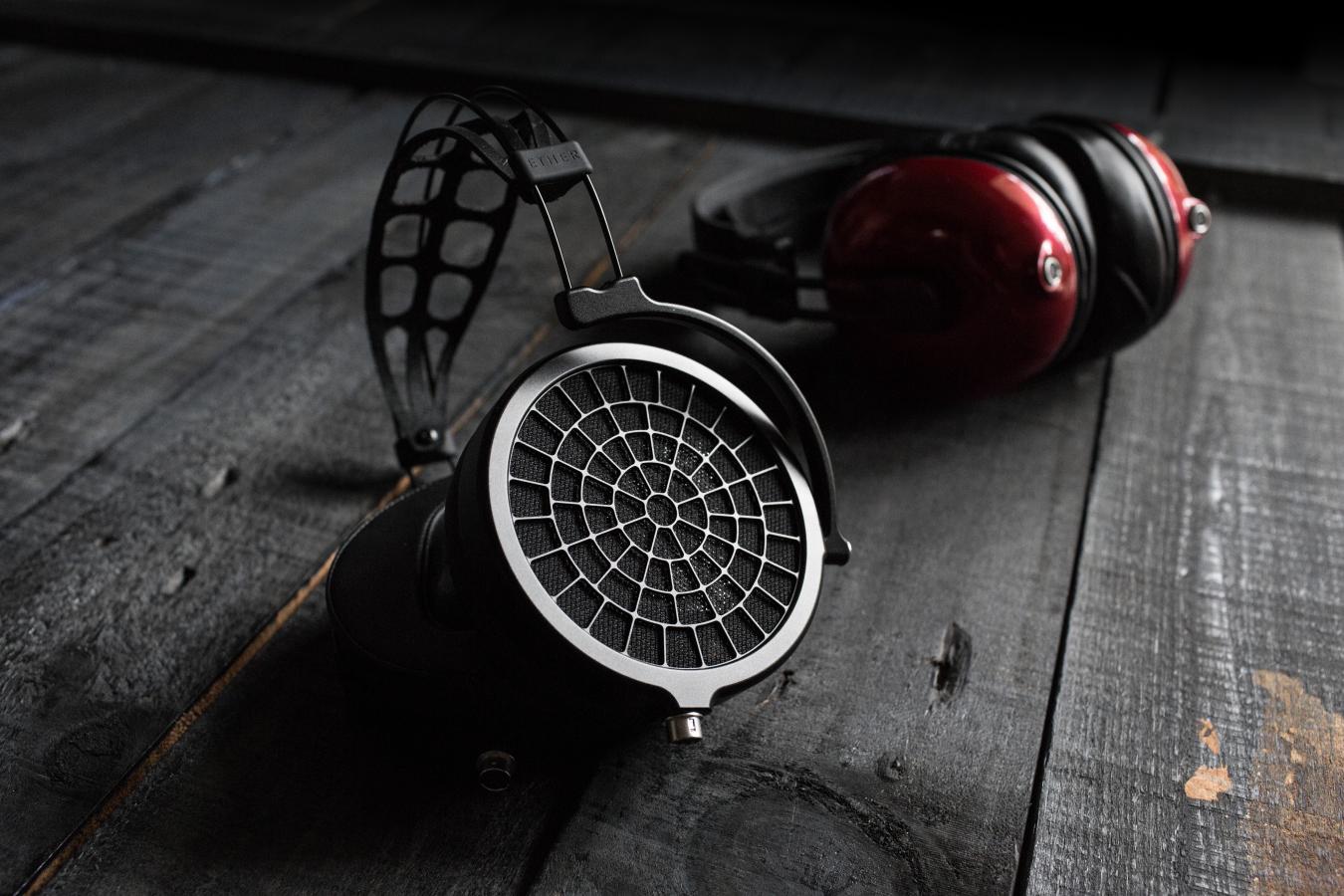