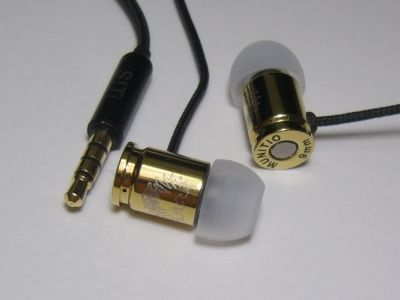 Accessories (2.5/5) – Single-flange silicone tips (4 pairs in 3 sizes), microfiber cleaning cloth, and soft leather carrying pouch
Build Quality (4.5/5) – Styled after a nine-millimeter round, the Teknines are noticeably smaller than the other bullet-shaped earphones I’ve come across and yet feel much sturdier. The fit and finish run with the best of the big-name manufacturers and the heft inspires confidence. The housings are engraved with the Munitio logo and the nozzles are protected by mesh filters. The Kevlar-reinforced cable is thicker than average and does a good job of staying untangled. It has a mild tendency to kink but should go the distance despite minimal strain relief. The cable cinch tends to let go of one side of the cable when tightened
Isolation (3/5) – Good for a dynamic-driver earphone and helped by the thicker-than-average eartips
Microphonics (4/5) – Slightly bothersome when worn cable-down; not an issue otherwise
Comfort (4/5) – The Teknines wear similarly to most other straight-barrel earphones. The housings are quite heavy – similar in weight to those of the Monster Jamz and Panasonic HJE900s – but slim and compact. They can be inserted deeper than the Fischer Silver Bullets and the stock tips are nice and thick. The cable-up configuration is preferable due to the heft of the housings

Sound (6.2/10) – As is usually the case with new entrants on the HiFi scene, I was quite unclear on what to expect from the Munitio Teknines. The minefield of marketing copy on Munitio’s website promises superior dynamic range, quick recovery, and sound purity, as well as tight and accurate bass and smooth treble response. All of these are important qualities for any IEM but the approach taken by Munitio in tuning the earphones makes them radically different from most of my other IEMs and very outlandish to my audiophile sensibilities. Whereas almost all of the gear we discuss around Head-Fi pursues balance, detail, and clarity, the Teknines have different priorities.

From the subbass onwards, the Teknines make no compromises whatsoever in favor of conventional ‘hi-fi’ sound. The inevitable comparison to the similarly-priced Monster Turbines reveals that the Teknines have more sub-bass presence, resulting in large amounts of deep, full-bodied bass rumble, and a touch more mid- and upper bass as well. Despite the massive bass boost, the Teknines present notes softly and smoothly, without the aggressive impact true bass monsters such as the Sony XB40EX and UE Super.Fi 5 EB. However, the real strength of the Monster Turbines – and the reason they are popular around Head-Fi – is that despite their bottom-heavy nature, they manage to keep the bass response where it belongs – under control and confined below the midrange frequencies. The Teknines, on the other hand, don’t do quite as good a job of controlling their low end. Though detail is quite decent, bass texture and resolution take a hit – the cheaper Fischer Audio Eterna does a slightly better job of distinguishing low notes and generally sounds crisper, not only down low but across the entire frequency range. The Teknines also possess somewhat lengthy attack and decay times even when compared to other bass-heavy, consumer-oriented earphones.

Any IEM with a single driver and a ton of soft-sounding bass is bound to have somewhat veiled mids, and the Teknines are no exception. The mids are slightly thick and a tad warm but not excessively so on either count. Even fully burned-in, however, the Munitios sound fairly veiled, especially at lower volumes. Raising the volume makes the veil much less noticeable and brings the earphones to life. Clarity is generally sub-par and some of the detail is masked. On the upside, the softened way in which the earphones present low notes does prevent the bass from crowding out the midrange completely and makes the Munitio one of the smoothest-sounding in-ears I’ve heard. Put together, the mids and bass provide a complimentary, well-blended sound despite all of its technical shortfalls – a far cry from the SF5EB, which assigns the bass to a separate driver, or the Fischer Audio Eterna, which has noticeably more recessed mids.

Expectedly, the treble transition and high end of the earphones are very smooth. The midrange veil thins out towards the top, permitting the high end to possess a bit of crispness in comparison to the midrange. The treble is still extremely soft, however – though the Fischer Audio Eterna handily beats the Teknines in clarity and resolution, it sounds very hard-edged and aggressive doing it. The Brainwavz M2, with its gently rolled-off upper treble, is more similar but still far more forward at the upper midrange than the Teknines. Indeed, the entire presentation of the Teknines is slightly distant, as if the veil had a very tangible thickness to it. Aside from the inner limit of the soundstage and slight lack of air, the presentation of the Teknines is pleasing, with above-average width and decent depth. The Eterna, which suffers from similar intimacy issues, sounds wider still and has slightly better imaging but at the same time thins out more to cover its massive soundstage. If anything, the soft and powerful bass of the Munitios allows them to envelop more of the soundstage in music. Dynamics are good and the Teknines can portray subtlety as well as aggression. That said, the low sensitivity of the earphones doesn’t do the low-volume performance any favors so expect to crank up the volume to get the full benefits.

Value (5.5/10) – In the past year we’ve seen several manufacturers go down the ammunition path with their designs but the Munitio Teknines may just be the most faithful take on the form factor yet. Carrying an inherent appeal to the ’18-24’ demographic, the shape also allows for rock-solid construction and general user-friendliness but it is the sound signature that really sets the Teknine apart from the field. Smooth and powerful, the earphones take ‘non-fatiguing’ sound to new extremes. There undoubtedly is a certain charm to their sound – a sense of brutality with a veneer of restrain. Their signature is perfect for those who, upon hearing any other earphone, immediately wish it to be smoother and bassier. On the other hand those who, like me, value clarity and separation above all, usually listen at low volumes, and prefer tight and quick to loud and ponderous will not be sold on the Teknines. Personally, I can think of hundreds of IEMs I’d buy before the Teknines, but then I am clearly not part of the target audience.