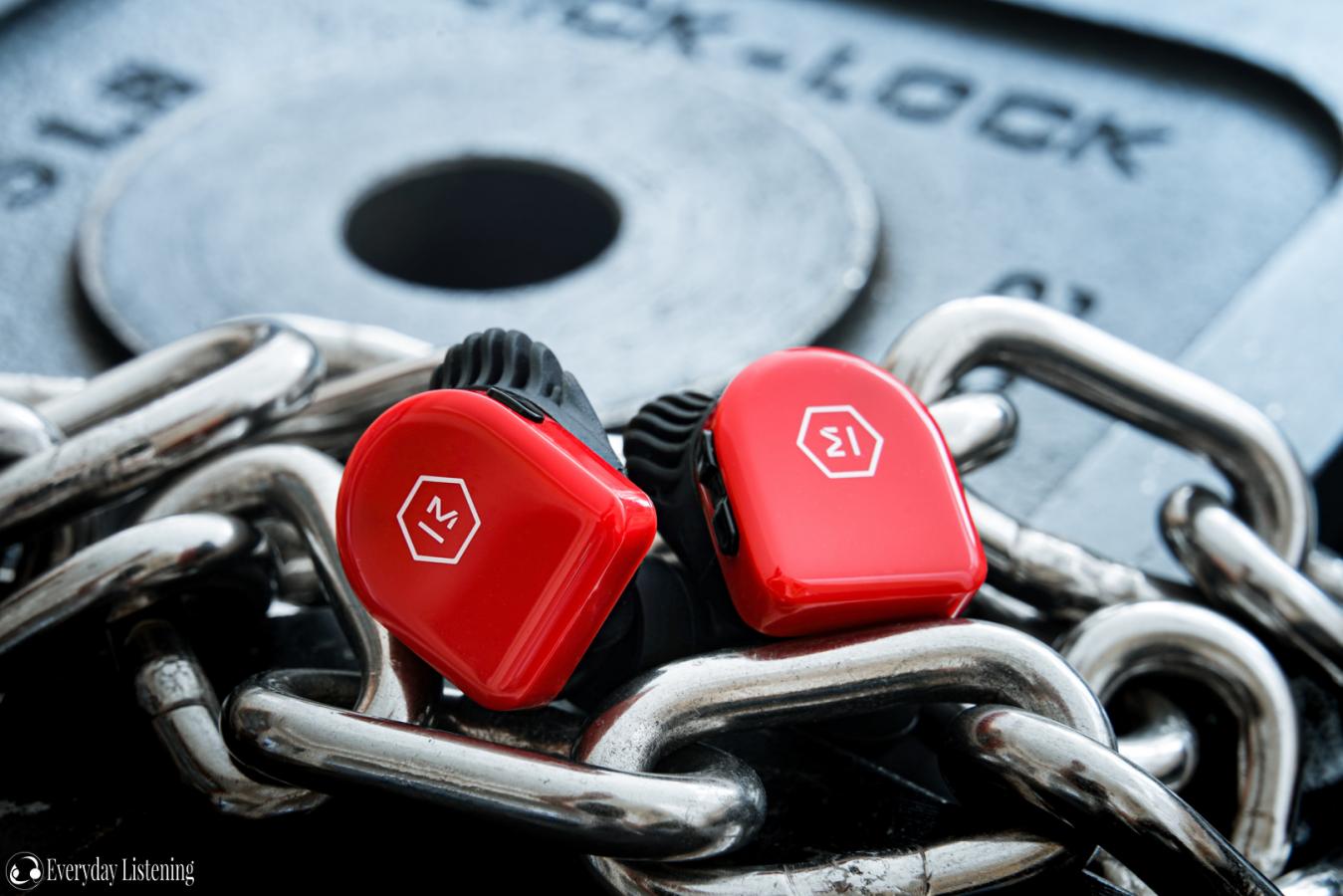 Similar to the above sections, the GO also shares many traits with the Plus with which it shares its driver and circuitry. I can only speculate that the GO sounds and measures differently as a result of a higher impedance filter in order to bolster its ingress rating. That means the GO also sounds better than its predecessor and to my ear is a bit easier to listen to than the Plus despite being less objectively balanced. It remains a U-shaped sound with present and nicely linear bass, laid-back yet clear vocals and a smooth, dense upper midrange. The highs are well-extended for a TWS earphone but lack some of the Plus’ air, being smoother and darker overall. The GO represents a sound technical performance alongside a warmer and smoother sound than the Plus which better suits high-volume listening and will appeal to those sensitive to brightness while upholding a reasonable level of balance overall. This is a wise tuning for its intended purposes, especially as it lacks ANC to combat ambient noise.

Similar to the Plus, the GO’s bass has excellent extension with modest sub-bass emphasis. I do notice slightly greater pressure than that model, providing a more substantial kick at the very bottom, however, this is neither an overwhelming nor muddy the low-end. The mid-bass upholds Good linearity with the sub-bass, contributing to a slight warmth and satisfying fullness. As the upper-bass and lower-midrange see progressive attenuation, the low-end remains quite clean in tone, avoiding excessive warmth and tubbiness.

I walked away very impressed by the driver control showcased by the Plus and the GO maintains similar qualities, relinquishing just a touch of mid-bass definition and texture to its fuller sub-bass. However, make no mistake, this remains a well-controlled low-end devoid of bloat and muddiness with the addition of natural to slightly fast decay and great dynamics. The additional fullness is well-metered and surely welcome for an earphone intended for noisy environments without ANC. It’s also commendable that the price cut isn’t to the detriment of technical ability as well.

The clear, natural and slightly laid-back midrange of the Plus also makes a return, here with greater smoothness and a slight reduction in vocal size. The tuning is very similar with a rise to a 3KHz hump with subsequent fall-off before picking up in the treble region. However, the GO has a more attenuated top-end with noticeably less 3KHz presence and a smoother treble on top. As such, this earphone is noticeably fuller. Female vocals, in particular, are also slightly more laid-back but command strong clarity with their slight upper-midrange bias, remaining very discernible and well-defined.

The GO carries the warmer tone of the Plus with a touch of additional vocal body and it is perceptibly smoother, to my ear lacking the brightness that could make the Plus a bit intense to listen to. As such, the GO isn’t necessarily more accurate or transparent, but it is better suited for high-volume or longer listening. It doesn’t have a perfect timbre but is naturally voiced with powerful body and strong clarity and vocal definition. It upholds reasonably cleanliness by avoiding excessive bass colouration while the smoother top-end keeps articulation and sibilance in check. This is a more coherent performer than the Plus at the cost of balance between bass and vocals and a touch of separation.

I actually prefer the top-end of the MW07 GO over the Plus. In terms of tuning, the peaks and troughs lie in the same regions emphasis picking up around 6KHz and reaching greatest prominence slightly higher up. However, as all have been lightly toned down, the GO has greater linearity. In turn, it lacks the same airiness and open soundscape but is cleaner, more composed and natural. Instruments sacrifice some attack for more appropriate body and texture while retaining adequate crispness. The lower-treble is still slightly crisp and enhanced, however, its presence now sits a touch behind the rest of the mix. Resultantly, the presentation has more contrast and focus as treble instrumentation no longer competes for presence with the bass and upper-midrange.

As aforementioned, middle-treble is also darker yielding a noticeably darker and cleaner background. They roll-off somewhat through the middle-treble and slightly sooner than the Plus, in fact. As such, the GO lacks the same sparkle and shimmer but as its darker middle-treble creates a greater sense of distance, it possesses similar soundstage expansion. Surely the Plus has sharper transients while the GO has smoother and more natural notes suiting its intended purposes; that being, long and high-volume listening. It’s encouraging that in so doing, fidelity has been retained.

With Good treble extension within its class and a clean, dark background, the GO crafts a soundstage that expands laterally just beyond the head and projects a pleasing sense of depth for a well-rounded image. Imaging performance is sound, lacking the sharp directional cues of the Plus but achieving a more coherent presentation with less emphasized panning and more precise directionality. Separation is slightly reduced compared to the MW07 Plus but it higher within the treble due to greater cleanliness in the middle-treble.

Master & Dynamic MW07 Plus ($299): The MW07 Plus has a more balanced sound but is overall similar in voicing. It has a more linear low-end with less sub-bass slam but a more defined mid-bass and better control and separation. The midrange is also similarly voiced, but a touch brighter and more intense in the upper-midrange. However, this also brings vocals more in-line with the bass in terms of presence. The MW07 Plus has a slightly cleaner midrange too, both are warm but the MW07 is less full-bodied so both separation and definition are higher. The GO is smoother and more natural in terms of tone, lacking that sense of brightness and intensity.

The MW07 Plus also has a brighter top-end both with regards to the lower and especially middle-treble. It is crisper with thinner instrumentation but noticeably more air and background detail retrieval. The MW07 Plus has slightly higher resolution and better extension, however, it isn’t as clean sounding. The GO is smoother with more accurate instrument body and texture, with a cleaner and darker background at the cost of being slightly less resolving. Both have very similar soundstage expansion, the MW07 Plus has sharper directional cues while the GO is more coherent.

Adv M5 TWS ($200): The M5 TWS is a more mid-forward earphone with a more technical sound. Bass is substantially less present on the M5 TWS and doesn’t extend quite as well but retains good kick and punch. The M5 TWS has a neutral mid-bass and upper-bass, being cleaner and more separated as a result. It has higher control and quicker decay making it more defined detailed at the cost of body and warmth. The midrange presentation is more natural on the MW07 GO, being fuller and smoother while the M5 TWS is a lot more forward, thinner in body but more revealing and neutrally toned. The M5 has a more present upper-midrange and less bass warmth sounding more intense, a step above the Plus in fact.

Due to its well-restrained treble and 4KHz region that redeems some smoothness and density, the M5 doesn’t absolutely fatigue. The M5 TWS is brighter all around up top with a crisper lower-treble and more linear extension into the upper-treble. It has more resolution and detail retrieval throughout but also a brighter background which makes it sound less composed than the smoother MW07 GO. The M5 TWS has more extension at the very top and perceptibly more sparkle and shimmer. The M5 TWS has a wider soundstage while the MW07 GO has better layering with a darker background.

Sennheiser Momentum TWS ($250): The Warmer GO achieves greater parity with the similarly warm and smooth Momentum TWS. The Senn is more V-shaped and even warmer and smoother. It has a touch less sub-bass extension but similarly strong quantity generating a hearty rumble and slam. The Momentum has more bias to the mid-bass, creating its warmer and fuller sound where the MW07 GO is slightly warm but certainly cleaner than the Senn. The MW07 GO has better low-end control and greater definition and detail retrieval as a result. The Senn is smoother and more organic but misses some fine details.

The MW07 GO has more vocal presence which makes it more balanced overall. It sounds more natural and transparent where the Momentum TWS is more laid-back and noticeably smoother within the upper-midrange, granting it a full, organic sound. Neither have an ounce of rasp or thinness, the MW07 GO has more clarity and cleanliness while the Momentum may be too thick for some. In the treble, the MW07 GO offers more full-bodied treble notes, though it also doesn’t possess the same level of foreground focus and crispness. The MW07 GO has better treble extension and both are clean in the background. Both have a well-layered presentation but the GO provides better soundstage expansion.

The GO has been positioned as the most accessible MW07 earphone with the most accessible price to match. Though it makes some compromise to feature-set, the core fundamentals are not only untouched but refined for its intended consumer base. It brings the strongest ingress protection and a lightened, more compact design producing excellent wearing comfort. The same excellent battery life remains and that case is more pocketable than ever. The sound is perhaps most impressive, smoother, fuller and more impactful than any other MW07 earphone. It very well suits high-volume applications such as workouts but without a hint of muddiness or veil. This is a very well-metered warm, smooth sound with an uptick of treble crispness and midrange clarity but never in excess. The MW07 Go suits those wanting a streamlined audio-focussed TWS earphone with excellent battery life and a sound that’s warm enough for the GO but balanced enough to be enjoyed at home too.

The Cranberries – No Need To Argue