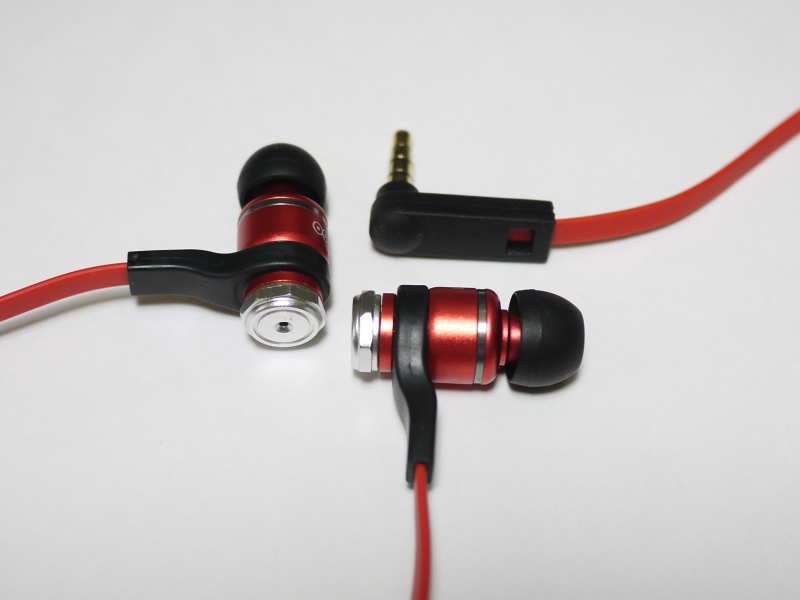 Accessories (4/5) – Single-flange silicone tips (3 sizes), shirt clip, tuning ports (3 pairs), and oversize zippered carrying case
Build Quality (4/5) – The body of the R1M is aluminum, quite solidly made, and features screw-in rear tuning ports (three pairs are included). Semi-flexible strain reliefs are fitted over the housings, protecting the sturdy flat cable. A mic and single-button remote unit is mounted on the right earpiece and the cable is terminated with a low-profile L-plug. Some driver flex is present
Isolation (3/5) – About average for an earphone of this type
Microphonics (3.5/5) – Noticeable when worn cable-down but the thick flat cable is not particularly energetic, which helps. Over-the-ear wear is a little difficult but makes microphonics negligible
Comfort (3.5/5) – The housings of the R1M are on the large side, but light enough to still be comfortable. The flat cable, long strain reliefs, mic position, and lack of cable cinch don’t lend themselves well to over-the-ear wear, but it is not impossible to wear the R1M cable up

Sound (7.6/10) – The main feature of the NarMoo R1M is the sound adjustment system with interchangeable screw-in tuning ports. This concept, right down to the color coding of the screws, should be familiar to owners of the MEElectronics SP51. The sound tuning of the R1M follows the same scheme – the black ports are the bassiest by far, followed by the darker silver (metallic) ones and then the light silver ones. In short, the tuning screws are configured as follows:

Silver ports: most balanced sound; slightly v-shaped signature with solid bass punch and ample upper midrange/treble presence
Metallic ports: less balanced, borderline “bassy” sound but for the most part maintains bass control and clarity close to those of the silver ports
Black ports: maximum bass setting. Cranks up both the sub-bass and mid-bass for an experience that will please even serious bassheads, but gives up bass tightness in the process

The R1M looks to be the next generation of sound tuning earphones, with ports that are nice and large in contrast to similar designs I’ve seen in the past, making them easier to use and harder to misplace.

With the black ports in place, the sound of the R1M is suitable for fans of heavy bass. Bass depth is excellent but the mid-bass region is boosted more, resulting in slight masking of the sub-bass. The bass is often too boomy for me in this configuration.

With both the metallic and silver ports the low end is much more manageable – not quite as tight as that of my pricier VSonic VSD1S benchmark, but close. The metallic ports are bassier than the silver ones but still manage to maintain good quality. The midrange and treble are remarkably unaffected when swapping the ports, aside from the effects of the bass quantity differences.

The silver ports being the more balanced – and the most impressive technically – led me to use them for the review. Unless otherwise noted, the rest of this review is based on the R1M with the silver ports installed.

With the silver ports, the bass of the R1M is only slightly enhanced – quantity is similar to one of my favorite budget earphones, the VSonic VSD1S. The R1M has less of a mid-bass boost than the VSonics and less recessed mids, which gives it a cooler overall tonal character.

The most impressive aspect of the silver ports, however, is the overall clarity, which falls only a bit behind the pricier VSD1S but easily beats similarly-priced sets from Dunu, MEElectronics, Ultimate Ears, and the like. This is in part due to strong presence in the upper midrange and treble, which also contributes to the somewhat cool tonal character of the earphones. It’s not the most natural midrange presentation, but it works well in the case of the R1M.

The prominent upper mids of the R1M can sound a little edgy and the earphone doesn’t have the smoothest or most extended treble. It lacks a bit of crispness and instruments like hi-hats can sound a little too distant and vague compared pricier sets. However, despite the strong upper midrange presence, the R1M is surprisingly tolerant of sibilance. Compared to the VSD1S, for example, it’s quite a lot more forgiving.

Presentation is another definite strong suit of the R1M, one that impressed me at first listen. There are previous few budget earphones that sound as spacious, airy, and open as the R1M. The aforementioned lack of crispness takes away from their imaging ability a bit, making the soundstaging a touch vague, but overall the earphones simply provide a great sense of space.

Select Comparisons (Note: in each comparison the port with the best signature match was selected)

The sound of the NE-600X is very close to the R1M with the black tuning ports installed. Both have enormous bass that should satisfy even die-hard bassheads, and yet despite their deep, booming bass, both earphones still offer pretty good clarity and avoid the sort of congestion that often plagues entry-level basshead earphones. The differences are subtle – the NE-600X is warmer in tone while the R1M is a little more neutral despite having similar bass impact. Vocals are a bit more intelligible on the R1M, likely due to slightly greater midrange presence, but overall the NE-600X is a little clearer and more crisp, especially up top. The NE-600X is a little harsher, however.

Though the MA350 doesn’t quite have the bass impact of the NE-600X, its bass quantity is still closer to the black ports of the R1M than the metallic ones. Overall performance is again extremely close between the two earphones – they have similar bass control and clarity, though switching over the metallic or silver ports gives the advantage to the R1M on both counts. The largest difference between them is treble quality – the MA350 tends to be somewhat harsh and grainy compared to the NarMoo unit whereas the R1M, while less crisp, has smoother and more forgiving treble. The R1M also has a small advantage in soundstage size and airiness.

VSonic’s enhanced-bass GR02 model finds its match in the R1M with the metallic tuning ports in place. The GR02 BE has always impressed me with its balance of bass quantity and quality, and it still beats the R1M slightly in bass control. However, while bass impact and depth are similar between the two earphones, the R1M is more balanced overall. It makes the GR02 BE sound overly v-shaped and mid-recessed. The GR02 BE is a little bit clearer, however, partly due to its greater treble energy. It makes the R1M appear a little dull at the top in comparison, but is also more harsh and sibilant. On the whole, the sound of the R1M is more natural through the midrange and treble. The R1M also has a better presentation, sounding more open and spacious than the GR02 BE.

With the silver tuning ports, the NarMoo R1M is technically at its best and capable of going up against T-Peos’ limited edition D200R model. The D200R has slightly less bass quantity than even the silver ports of the R1M but, like all of the T-Peos sets I’ve tried, still maintains excellent extension and is capable of very solid punch on tracks that call for bass. The R1M is a little heavier in the mid-bass region, which makes its low end appear stronger and at times more intrusive. The bass of the D200R is tighter. The midrange of the D200R is more prominent and clear, but the T-Peos also tend to sound harsher at times. The R1M is less crisp overall, but boasts a wider presentation and more open sound next to the more forward and closed-in D200R.

The mid-forward Fidue A63 is opposite in signature to the R1M, making for an excellent sound contrast. Even with the silver ports in place, the R1M is bassier than the A63 and its low end is more prone to sounding boomy and bloated. The tighter bass of the A63, combined with its prominent midrange, gives vocals better clarity and intelligibility compared to the R1M. The tone of the Fidue set is warmer overall and its treble is smoother. The R1M is more v-shaped in sound signature and brighter in tone. It also has a wider presentation. However, the smaller soundstage of the A63 is actually slightly more coherent and imaging is more precise.

Value (9/10) – The NarMoo R1M is an excellent first effort, offering pretty much everything one could want from a budget earphone – a solid construction, built-in mic and remote, and the ability to select between three levels of bass ranging from “basshead” to “mild enhancement”. The tuning port idea is not new, but it is well-executed, with ports that are easy to change by hand and provide clearly audible differences in sound. At the current sub-$30 price, these features make the R1M a great value.