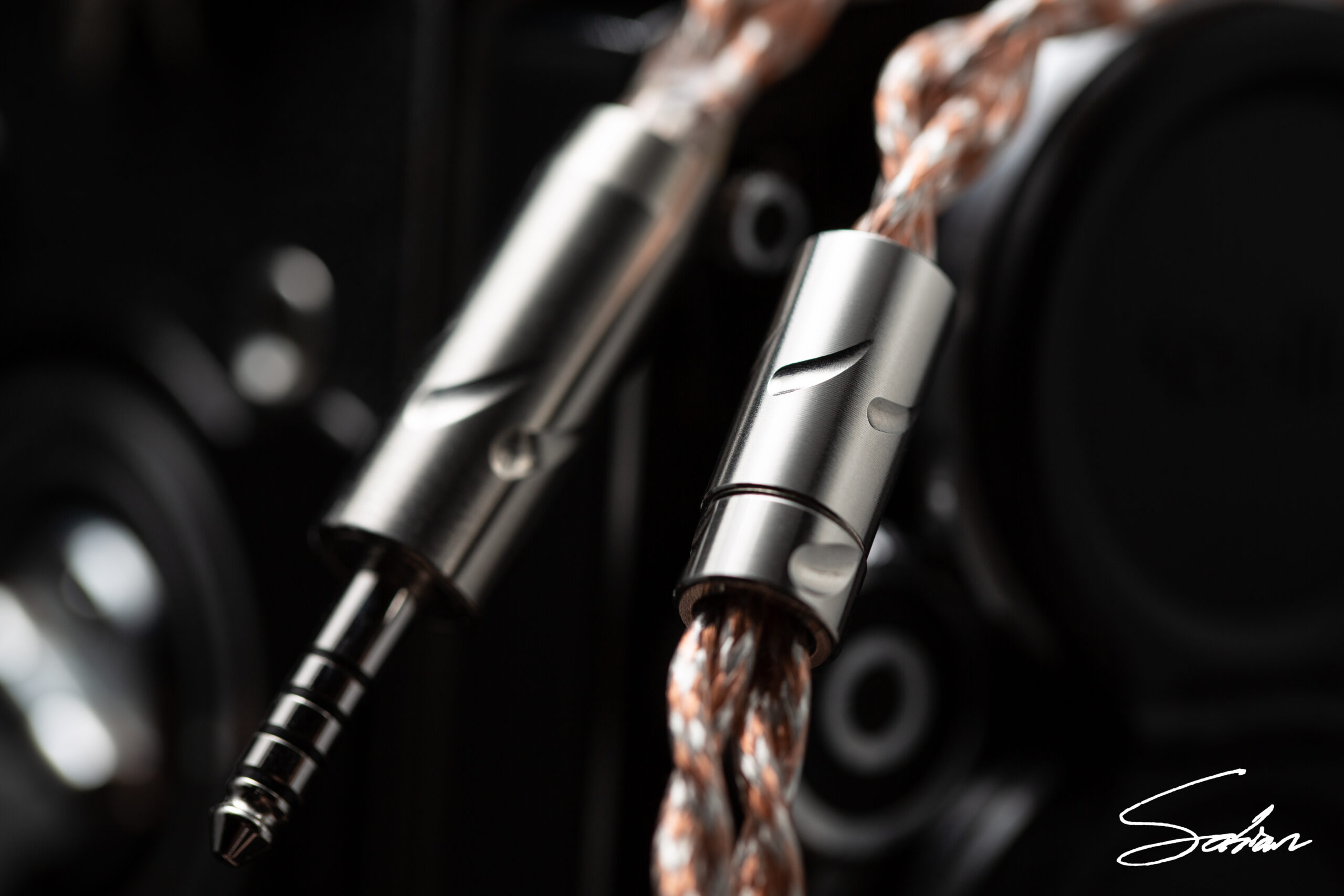 Nightjar Acoustics 4-wire Mira: Behind the Veil – A Cable Review

DISCLAIMER: Nightjar Acoustics provided the Mira in return for my honest opinion. I am not personally affiliated with the company in any way, nor do I receive any monetary rewards for a positive evaluation. I’d like to thank Nightjar Acoustics for their kindness and support. The review is as follows.

Nightjar Acoustics is a brand steeped in potential. The Singaporean cable makers, likely new to most, have nevertheless drummed up quite a bit of parallel anticipation (or hype), because of their relationship with fellow Singaporean brand, Subtonic. The latter’s upcoming Storm in-ears have been the talk of the town for months now as a potential godkiller, and the cable attached to that monitor has received some of that talk as a result. Mira is its name; Nightjar Acoustics’ top-of-the-line offering, and the cable we’re going to look at today. Coming in 4-wire form with a bespoke metal blend, heaps of in-house tech and an eye-watering $2499 MSRP, can the Mira fulfill Nightjar’s potential as one to watch? Find out below.

The Mira arrives in a fairly-lavish wooden box with the company logo cleanly-engraved on top. Sliding the box open, you’ll find a black, Nightjar-branded envelope, which contains a couple stickers and an owner’s card. Personally, I would’ve liked a hair more individuality on the latter; perhaps, a unique serial number or a handwritten signature from the Nightjar staff. It looks little more than a normal business card at the moment, so it’s something I’d encourage them to improve. One thing I can give them credit for is the fact that this card is very solidly-made; not mere cardboard here. It just needs more on it.

Beneath this envelope, you’ll find the padded inner lid of the box, which comes covered in a gray knit. This theme remains throughout the rest of the box’s interior – foam covered in gray – and I appreciate that continuity. And, within all that sits the Mira cable itself, along with a leather cable tie and a Nightjar-branded cleaning cloth. I really appreciate the inclusion of both accessories. It’s the bare minimum I’ve asked for in all my cable reviews. The only thing missing here, once again, is a little bit of personality. The leather cable tie, especially, is little more than OEM-quality, if I’m being honest. It would’ve been great to have a premium leather engraved with the brand’s emblem, for example. At prices like these, the little things do count.

Ultimately, with the packaging and presentation, what I’d love to see Nightjar improve on is theatricality. Although folding compartments and boxes-within-boxes may appear frivolous or unnecessary, that kind of build-up – those little ooh, aah moments – do matter when you’re trying to justify a $2499 price tag. It’s a necessary air of luxury that gives the consumer confidence in their purchase, even before listening to it. So, it’s something I’d love to see Nightjar improve on, and it’s hard to do as a newcomer against their more experienced, veteran compatriots. But, if you wanna charge their prices, then you gotta play their game.

The Mira is a striking-looking cable, both because of its blend of metals and its imposing size. Its copper and silver-plated copper mesh gifts it a lattice-like pattern, almost akin to scales on a snake. Then, the cable’s clear PVC coat allows it all to gleam brilliantly through. They’ve then paired this with 2-pin plugs and a 4.4mm plug from AEC and Furutech, respectively, which come in matching chrome. If I’m being honest, I’m missing a bit of personality here, whether it’s the colorful panels of an Effect Audio, or the intricate CNC-work of an Eletech. For an industry newcomer, I guess I can’t expect too much, but there’s no escaping the Mira’s huge price tag here either. So, I guess it’s up to how much you value your cable’s aesthetics.

In terms of craftsmanship, I have very little complaints. My Mira unit was constructed near-flawlessly. The braiding’s very even and it’s just tight enough. There aren’t any loose or ill-twisted conductors throughout the cable. Then, the finishing across all the hardware is great as well. The chrome pieces have a smooth luster, the CNC-ing’s been done cleanly, and there isn’t a glue splotch or blemish in sight. The one nitpick I have would probably be the bits of heatshrink peeking out of the 2-pin and 4.4mm plugs. There’s an argument to be made that the hardware could pierce or cut the insulation if the heatshrink was cut short. But, I can’t help but feel that it makes the Mira seem a bit home-brewed; an iota less polished. This aside, I again have no issues with the Mira’s build. Get that quirk sorted with some custom hardware, and it’s perfect.

Ergonomics, I expect, will be a point of contention with the Mira. The cable’s 4-wire format and shielding adds a notable amount of heft, and it definitely comes through in day-to-day use. When you’re on the go with the Mira looped around your ears, you will feel them weighing you down after some time, and it’s a weight that just won’t vanish like it can with a lighter, thinner cable. It also isn’t the silkiest, softest, most supple cable in the world. There’s a stiffness – a rigidity – to it. The insulation has a very slight plasticky feel. So, again, it’s not gonna drape down and vanish like some flagship cables will. It’s a cable you’re gonna know is there, whether you like it or not, and that’s something people should consider before investing in a set.

With that said, those quirks aren’t as big of a deal when you’re using the cable sitting at home. Neither the Mira’s weight nor its flexibility really come into play when you’re listening to tunes by your desk or on a couch. So, it ultimately comes down to use case, in my opinion. If you’re an on-the-go audiophile, then you’ll have to weigh up those physical constraints. Whereas, if you’re a desktop listener, then the 4-wire Mira might just be the perfect cable for you. So, again, your mileage will vary, and it’ll be up to you to decide.

Dynamic Strand Sizing is one of two technologies Nightjar have incorporated into the Mira cable. It involves incorporating wires of different sizes into each individual conductor, which the brand claim does several things. These effects include:

Much of those advantages have to do with the ability to fine-tune parameters with those alternating strand sizes. While this isn’t a concept that’s exactly new, having previously been seen on Effect Audio or Eletech’s higher-end offerings, it is at least a guarantee of uniqueness, or individuality, or bespoke-ness. The conductors on the Mira aren’t ones you can get from any OEM and braid yourself. In that sense, it gives the Mira a strong USP, as well as the sonics we’ll talk about later on.

Anti-Noise Shielding is the second of the Mira’s bespoke technologies, and it entails wrapping several layers of insulation around the raw conductor. On the diagram on Nightjar’s website, their method involves an internal jacket of insulation, a braided metal mesh, then an external jacket of insulation. The metal mesh is actually what we see through the Mira’s clear PVC jacket, which is what gives it its unique, lattice-like appearance. What this shielding does is reduce interference and noise, but Nightjar also claim that the altered geometry stemming from the shielding improves imaging, detail and low-end performance too.

Lastly, Nightjar are also able to use the metal mesh as a ground conductor in a coaxial design, which allows them to halve the amount of cores present in the Mira without losing the cable’s effective gauge or conductivity. Veterans in the cable world may have previously seen this in PW Audio’s infamous 1960s, where its 2-wire variant is colloquially treated as a 4-wire cable, while its 4-wire variant is treated as an 8-wire cable. The same applies to the Mira here, because of its design.