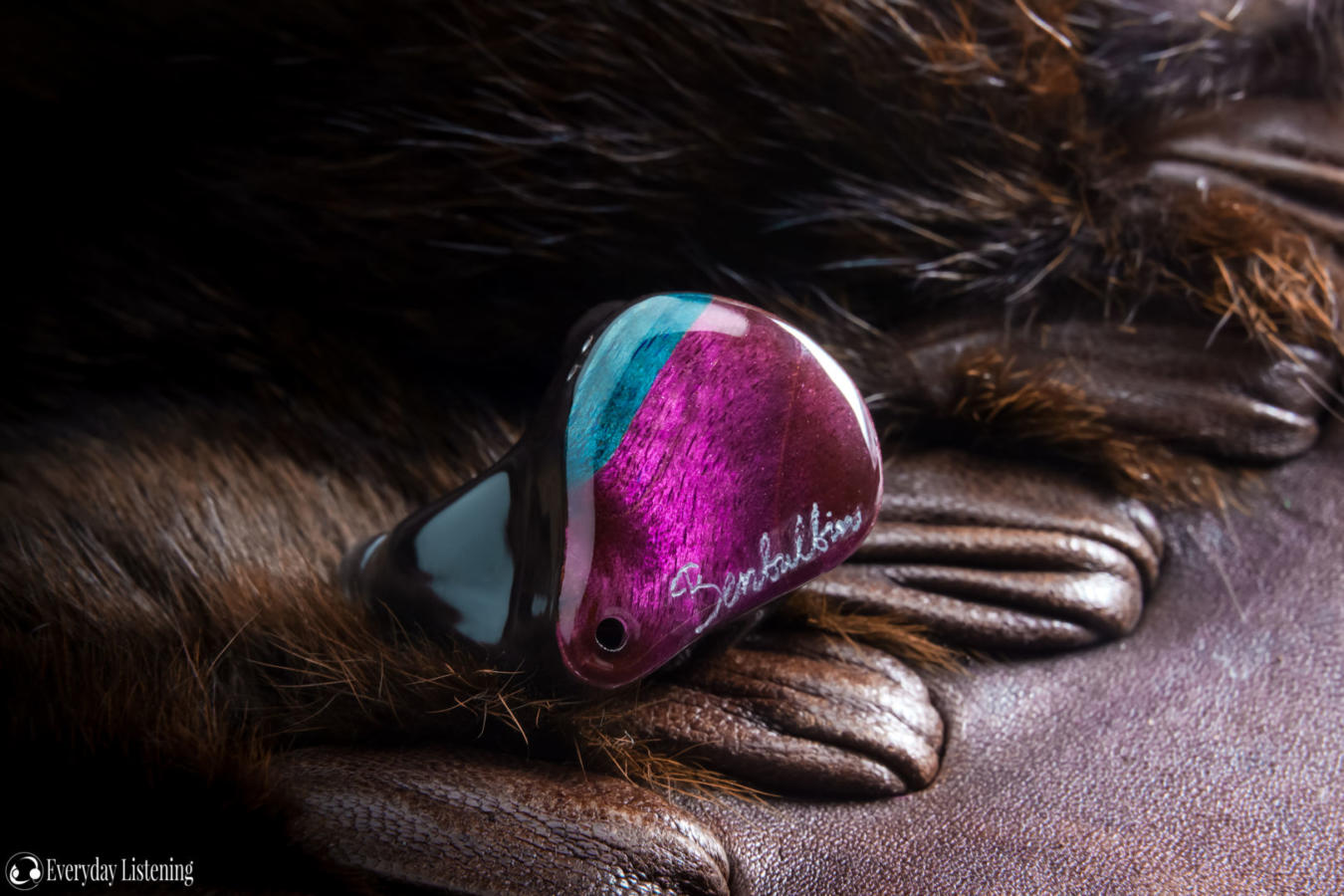 Soft Ears RSV ($729): The RSV is a tough model to beat, another very well-rounded performer. Sonically, both surprise in their similarity, the RSV being a little more detailed in the treble, the Benbulbin more resolving and extended in the bass. The RSV has a slightly bolder bass note presentation as its sub-bass boost continues further into the mid-bass, the Benbulbin is cleaner and extends further with its hybrid design. It has a more defined rumble and a slightly more accurate timbre to my ears, while the RSV is a bit more defined and full in the mid-bass with faster decay. The RSV has a smoother transition into its midrange. While both are tonally neutral, the RSV has a bit more body and better balance between male and female vocals. Note definition and separation are slightly higher on the Benbulbin due to its thinner note structure.

The RSV sounds a touch more even and accurate here, the Benbulbin having a slight revealing character. However, this is well counteracted by the Benbulbin’s smoother top-end that means it isn’t so sharp and less prone to intensity despite being thinner. This makes the Benbulbin a bit more forgiving in general. This character is further enhanced by the Benbulbin’s slightly smoother and more laid-back top-end. The RSV has a more present and slightly more linear foreground though both have similar foreground detail retrieval. The Benbulbin has a little less ringing and shimmer, sounding cleaner with a darker background. Meanwhile, the RSV has more air and resolves just a bit more background detail that the Benbulbin smooths over. Despite this, both offer similar soundstage dimensions and similarly sharp imaging.

GAudio Nair (759 CHF): A neutral-target 3 BA earphone with a very accurate timbre throughout. The Nair doesn’t glimpse the sub-bass extension and power of the Benbulbin. It has far less extension albeit a nice, quick punch in the mid-bass. While it is fast, flat and defined, the Benbulbin is just as clean and far more dynamic and genre versatile. The midrange and lower-treble are both more even on the Nair. In turn, it comes across as more linear and evenly-metered. It has more body and a slightly more natural voicing. The Benbulbin has a notable leg up on definition and it has greater clarity. It has better separation at the cost of coherence.

The Benbulbin has a smoother articulation that somewhat balances out its thinner body and enhanced clarity. The Nair has a more even lower-treble with a bit more body and texture. Despite this, the Benbulbin comes across as a bit more detailed here and also more separated. Both have a darker background, the Benbulbin has more headroom and background detail retrieval. It soundstage is noticably larger, wider especially. While both have sharp imaging, the Benbulbin’s presentation is a lot more layered, adding dimension and organisation.

Oriveti O800 ($799): The O800 is more similar than measurements may suggest with a similar balance and overall voicing. It has a bit more warmth in the mid-bass but also a deep-bass focus followed by a wideband upper-bass/lower-mid cut. With its all-BA setup, it doesn’t have the same sub-bass power and pressure as the Benbulbin. It is a bit fuller and quicker in the mid-bass, redeeming more fine detail here at the expense of texture and dynamics. Both are well-separated and defined that said, the Benbulbin has a cleaner tonality. Both have a tonally clean, sligthly thinner midrange with smooth articulation, the O800 is a bit more vocal-forward but also has a bit more warmth and power stemming from its bass.

The O800, despite this, has more texture and definition in its midrange. It is more vocal-focused but not less natural in its voicing. The Benbulbin is a bit cleaner and also more linear and balanced. The Benbulbin also has a bit more lower-treble energy and better fine detail retrieval here too. The O800 has a lick more headroom and background detail retrieval though both are dark and clean above with minimal sparkle. The O800 has a slightly larger soundstage with more depth especially while the Benbulbin offers sharper imaging and slightly better separation.

Fir Audio VxV ($999): The VxV offers a pseudo reference style tuning but is ultimately tuned more for musical enjoyment than sheer accuracy. The VxV offers similar balance with a lick of upper-mid forwardness, however, a much different voicing. Its bass is similarly well-extended but with less sub-bass pressure, rather, it is fuller in the mid and upper-bass. In turn, its bass is more robust and more textured, reigned in by more aggressive note attack. The Benbulbin is cleaner and more accurate with higher mid-bass definition. It is a bit tighter in its impact but not quite as articulate, despite its more neutral tuning. The VxV also has a more coloured midrange. It isn’t quite as natural in voicing, but coloured in tasteful measure.

It has a more accurate body, with a bit more foundation in the upper-bass and lower-mids. It has a very light warm tone and a dense, smooth upper midrange. The Benbulbin is quite a bit dryer in turn, it is cleaner tonally and more defined but also not quite as coherent and forgiving. The Benbulbin actually has a slightly more forward treble, albeit it is more linear. The VxV has a much thinner and more ethereal treble. However, it has notably improved fine detail retrieval and a lot more sparkle. The VxV has more air, more headroom and more background detail retrieval. The Benbulbin is more foreground focused but also has a better timbre and more defined layering. The Benbulbin has a slightly smaller but slightly more organised stage. Its localisation is sharper while the VxV is more holographic and multi-dimensional.

Campfire Andromeda 2020 ($1099): The Andro 2020 offers a notably warmer and sparklier presentation that is more obviously coloured. Its bass doesn’t extend as far but has good extension for a BA monitor. It has a much fuller, warmer voicing and more bass overall, set to a quicker decay. The Benbulbin extends better and has a much cleaner, more separated voicing. It has less bloat but also less punch though the Benbulbin is also much more dynamic. The Andro has a slightly more laid-back midrange with a warmer tone and fuller body. It has high clarity and is more articulate. The Benbulbin is much cleaner tonally and has a much thinner body. However, it also has as smoother articulation. Because it has better separation from the bass and less colouration, the Benbulbin comes across as much clearer and more defined without being much brighter.

The Andro has a crisper lower-treble and a brighter middle-treble on top. Both are similarly well-detailed in the foreground, despite the Benbulbin being smoother and more laid-back. However, the Andro has a lot more sparkle and micro-detail, pushing background details more to the fore. The Benbulbin isn’t as bright and has a darker, cleaner background. However, it also doesn’t have the same extension. The soundstage is a touch wider on the Andro and it has more depth too. The Ando’s imaging is more holographic due to its more obvious sparkle and energetic treble. However, the Andro doesn’t layer like the Benbulbin, having less contrast between its foreground and background.

It’s tough being a new company because there’s an implicit trust granted to companies who have been in the market for some years. I remember having nothing but scepticism of the first Moondrop releases but wouldn’t bat an eye recommending one of their models in the current day. Where does this attitude stem from? Likely the quick turnaround in the market combined with the staggering rate of progress in the cheaper price brackets especially that can quickly make a particular model obsolete. So where does Benbulbin stand? This is an earphone that almost matches class leaders in tonal refinement and does so on a capable hybrid platform, but falls just short of those one class up in terms of treble extension and micro-detail retrieval. This means for only slightly more outlay, you can get a noticeably more detailed and immersive in-ear monitor.

However, this does come at the cost of accuracy and, accordingly, the ability to provide a strong tonal and technical performance is what forms the Benbulbin’s raison d’etre. This is a well-rounded and minimal compromise package. I do believe that in pursuing its own identity, it does sacrifice the especially wide appeal of a true reference monitor. Specifically, I did find myself wanting more refinement in the upper-midrange and the dark background does mean you don’t get a whole lot of sparkle and micro-detail at the very top. However, if you enjoy a clear, balanced sound with a smoother treble, and don’t mind a little focus on female vocals, the Benbulbin is easy to like. With its exceptionally solid fit, class-leading cable and balanced sound that doesn’t sacrifice bass extension and power, Nostalgia Audio have created one of the most versatile IEMs in its price class.

The Benbulbin can be purchased from Nostalgia Audio for $899 USD at the time of review. I am not affiliated with Nostalgia Audio and receive no earnings from purchases through this link.