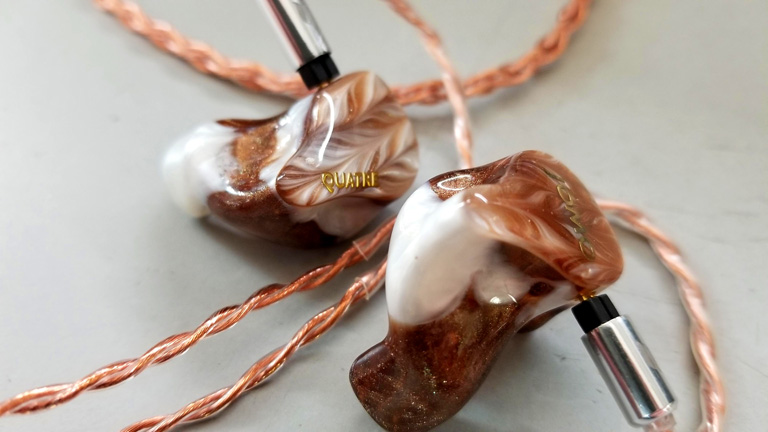 Of Passion and Purpose – A Review of the JOMO Audio Quatre

My sound description is based on the Balanced filter, as it is by far the one I listened to the most, and the one I think most people will choose. I originally expected to like Musical the most. But that was just too V-shaped for me. Vocals were getting kind of lost in all that bass. Energetic and Impact filters only get worse and worse. No doubt many will love that shit. But for me, Balanced was just perfect. In fact, I would call Balanced the true “musical” filter.

I’ll say it right up front, the Mélange Quatre is one of my favorite pieces of audio gear I’ve had the pleasure of trying. Its signature meshes with my tastes like few other monitors.

Quatre is the epitome of lush. A warm river of liquid chocolate pours forth, bearing rich, full-bodied notes through the canal, where it washes against your eardrum. Sufficient air accompanies this to dispel any cloud or haze and expose the venue to a wide, open sky. You never feel buried beneath the warmth. No claustrophobia. Neither do these dark tones result in dullness. Quite the contrary. There is a potency, a vibrancy, which takes on the soothing character of the overall presentation.

Treble is thick and honey-like. Nothing remotely harsh about it. The impressive extension is responsible for all that much-needed air. I can’t say there is much sparkle, but there is something better. Heavenly sweetness permeates the highs as they reach WAY up the frequency range. Sparkle can add excitement, but sweetness adds depth and richness. I know what I prefer. Quatre is downright mouthwatering. 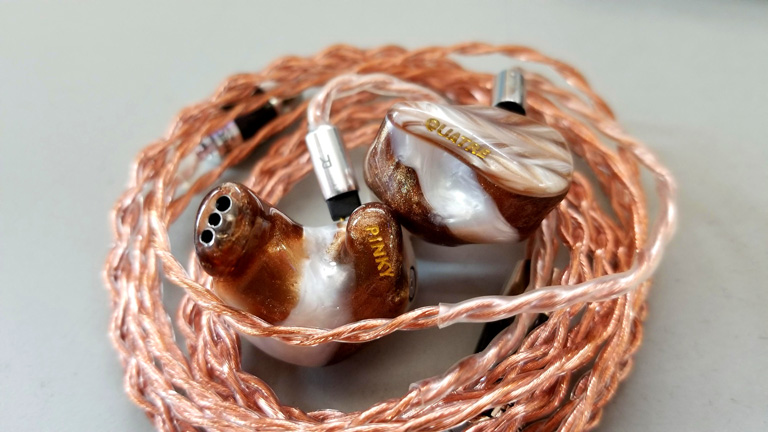 Vocals are VERY full and rounded, with a romantic coloring. They’re positioned slightly forward on the stage, and large enough to dominate your attention, even during the cacophony of a live Rock performance. As mentioned, the vocals are colored, so purists may need to opt out. Also, those who want detail and resolution more than anything will likely find Quatre on the congested side. It is… but ever so slightly. I’m alright with that, since the outcome is so goddamn enchanting.

As with vocals, the instruments are on the smooth, lush side, instead of sharp and crunchy. This means electric guitars lose some of their bite, yet gain tons of body and richness. Indeed, the abundance of harmonic overtones fills out the stage in a most satisfying way. You really feel the waves crashing over you.

Bass notes, generated from the dynamic driver, possess a beautiful, organic timbre. They are elegantly exaggerated, with an upper bass hump to achieve all that warmth and mid-range coloration. While the lows do not overshadow the rest of the profile, they sure do complete it. Deep thrums and melodious rumbles seem ever-present, creating a wealth of atmosphere to relax into. Downward extension is superb, and texturing is decent, though not the showstopper here. JOMO clearly focused on tone over detail in all aspects of Quatre. 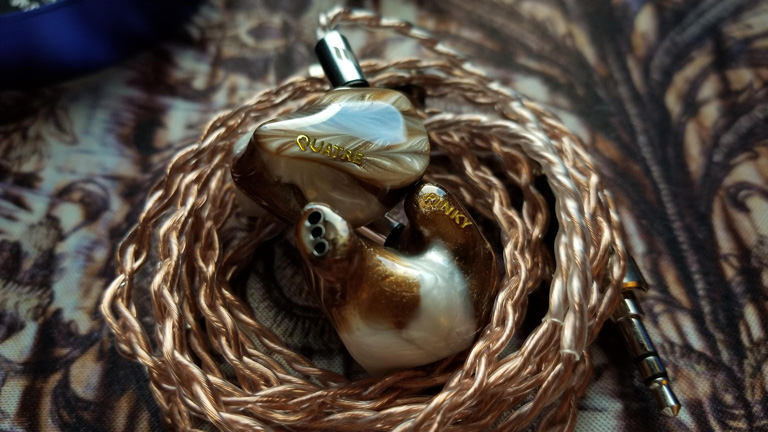 Soundstage is quite cubical. Wide, tall, and deep. Though in no way the biggest I’ve seen. Big enough, however, to roam around in. The elements on the stage have good size, which helps bring you into the midst of the music. Imaging is a thing of perfection, especially its capacity for placing things further into the stage. Separation is very good, considering the lack of focus on detail and clarity. Likewise, resolution suffers, but not to any great extent. As I’ve mentioned throughout the review, Quatre is for those who celebrate tone and musicality over technical feats. It’s a trade-off, and not one everybody will want to make.

The Empire Ears Legend X ($2,299, Review HERE) is, surprisingly, not very much like Quatre. Sure, it’s a multi-BA/Dynamic hybrid, but sweet f**k, the presentation shares little in common.

LX has a wider, less v-shaped profile. Where Quatre is thick, silky and slightly congested, LX is clear, sharp, and precise. LX is still firmly on the warm and musical side of tuning, but it balances this out with strong technical prowess.

LX’s treble is brighter. Not harsh bright, but definitely brighter. There’s genuine sparkle. LX also has some of Quatre’s sweetness, but no to the same extent. LX brings in lots of light and detail. In both Quatre and LX, treble is full, airy, and smooth. Both IEM’s extend well, but it wouldn’t surprise me if LX reached higher.

Vocals are smaller and denser with Legend X. Much more detail and texture. There is lushness to them, but nothing like to the degree we hear in Quatre. LX is a warm monitor. Quatre is WAY warmer. LX doesn’t have the same chocolaty smoothness. There’s too much articulation for that. Instruments are better defined, and electric guitars have proper crunch.

Even bass is vastly different. Quatre is all about warm, rounded tones. LX strikes hard and fast, with tight, deep-reaching lows that possess plenty of detail. Quatre feels sluggish and indistinct by comparison. LX has less mid and upper bass, focusing more on sub-bass. This keeps most of the coloration out of the vocal range and allows for a quicker, more textured presentation. In terms of overall quantity, Quatre is probably capable of more with the right filter configuration. But LX feels more aggressive, by landing harder, more visceral strikes.

The Legend X’s soundstage is quite a bit wider, but not as tall. They both have great depth. Imaging is about equal, but LX has superior separation, resolution, and detail. For my tastes, LX is still my favorite IEM. It has more than enough of Quatre’s strengths, but also excels at each and every technical pursuit. The only thing it doesn’t have is Quatre’s tonality, which feels like chocolate in your ear. I guess that’s why it’s good to have both!

Holy shit, the Custom Art FIBAE Massdrop Exclusive ($819.99, Review HERE) is so bloody close to Quatre with Balanced filter. I thought it might be, but I wasn’t prepared for just how much they have in common. For that reason, this comparison won’t be as long. I’d just be repeating myself.

The treble is thick and warm like Quatre, but less sweet, and less airy. Not as much light gets through. FIBAE ME feels darker because of it.

Vocals are even thicker, if that’s possible, and actually a little wooly. Denser and less clear. But they have the same forwardness and general size.

ME has a bass level somewhere between Quatre’s Balanced and Musical filters. As I was listening with Balanced, switching to FIBAE ME, there was definitely more bass, but not by a huge degree. Quatre has more texture, though, and a more physical rumble. This difference could merely be the nature of BA vs DD.

Soundstage is also remarkably similar in width and height, but Quatre goes deeper. Imaging is just as good. Separation and layering is better on Quatre, though, and resolution a tad sharper. Nonetheless, these two IEMs are cut of the same cloth, aiming for the same target. Quatre and FIBAE ME are warmth monsters that desire to be the most soothing, rich, and musical CIEMs money can buy. And they succeed. 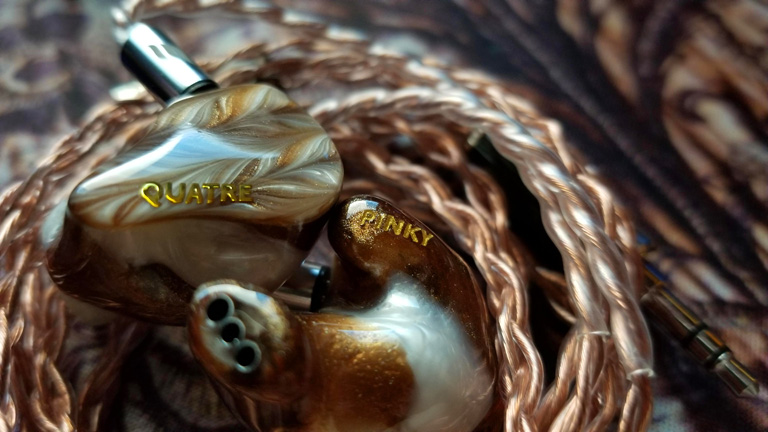