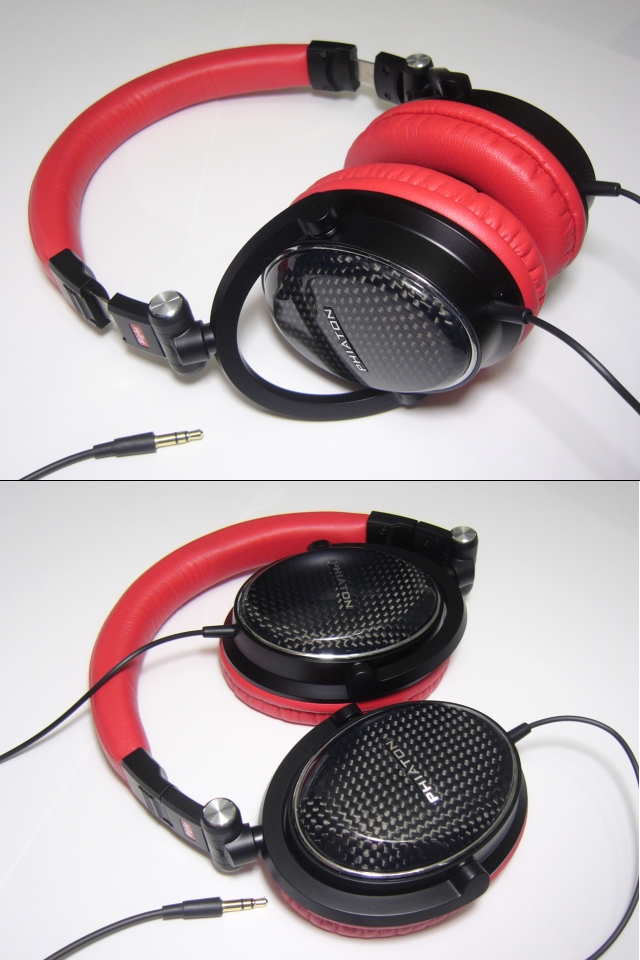 Brief: Finding that perfect combination of comfort, portability, isolation, and sound quaility has never been easy, especially in the $150-250 price range. Phiaton, an upmarket audio branch of Korean electronics firm Cresyn, attempts to find the perfect balance with the strikingly pretty MS400

Build Quality (8/10): The build of the MS400 impresses right out of the box. Unlike the brutish Sennheiser HD25-1 and AKG K181DJ, the MS400 feels precision-built without being too delicate. The inner structure, including the rotating hinges, is metal. The cups feature carbon fiber panels under a clear polycarbonate shell. The headband is generously padded in luxurious red pleather all the way around. The surrounding bits are plastic, but even the plastic panels are pleasant to the touch (take heed, GM) and look like they could take some abuse. The thin and flexible cabling is perfect for portable use but probably won’t double as a trailer hitch (unlike the HD25-1 cord). The 3.5mm plug features a very simple rubber strain relief and looks positively wimpy next to the similarly-priced DJ phones. I certainly wouldn’t risk throwing the MS400 into my book bag like I do the HD25-1. Luckily, I don’t need to – Phiaton includes a surprisingly slim hard clamshell carrying case that the MS400 fit snugly into when folded.

Comfort (8/10): The MS400 is a circumaural headphone close in size to the JVC HA-S700 but the thicker pads mean that the Phiatons will likely be supraaural for those with larger ears. The cups are fairly shallow and do tend to bottom out. The resulting pressure put on the ears by the plastic grilles can get fatiguing after long listening sessions. On the upside, the padding used on the cups and headband of the MS400 is easily the softest I’ve encountered, beating out even JVC’s memory foam-backed pads. The fit is highly adjustable due to the multi-axis folding mechanism and the medium clamping force does keep them comfortable for several hours. Like most pleather-padded circumaural headphones, the MS400 tend to invoke sweat after prolonged use but aren’t nearly as offensive in this respect as the Creative Aurvana Live! or JVC HA-M750.

Isolation (8/10): The MS400 isolate very well considering the comfort tradeoff. They won’t quite keep up with the (comparatively) head-crushing K181s or the vast majority of IEMs but the isolation is more than good enough for daily use. I did not feel the need to raise the volume during my commute, though the tiniest details were occasionally obscured by intruding noise. Leakage is non-existent thanks to the soft pads and compliant fit.

Sound (8/10): For months now the renowned Sennheiser HD25-1 II have been my everyday portable headphones of choice. On paper the similarly-priced Sennheisers make the perfect step-off point for comparison with the MS400. In reality, however, the two couldn’t be more different in signature or presentation. It is no coincidence that Phiaton is eschewing the common trend of hi-fi manufacturers marketing mid-range headphones as ‘DJ’, ‘Studio’, or ‘Monitoring’ products – the MS400 are aimed squarely at consumers, and it shows.

Starting at the low end, the MS400 boast the sort of full and engaging sound that captivates the average music lover at first listen far more easily than my Sennheisers. The low end boasts decent extension and good definition, with a very substantial emphasis on mid- and upper bass. Sub-bass is not as strong as on the AKG K181DJ or M-Audio Q40 but the low end is filled out nicely, properly textured, and impactful enough to make my Sennheisers sound positively anemic in comparison. As is often the case with bass-happy cans such as these, the low end never sounds particularly fast or sprightly and isn’t the most controlled. Taking into account the quantity of bass to be contained, however, the MS400 do quite a good job. Mid-range bleed is minimal and the hard-hitting bass gives the mids some pleasantly warm undertones. The full and slightly forward midrange plays well in conjunction with the hefty low end, giving the Phiatons a certain thickness of note that is absent in the vast majority of DJ/Monitoring headphones commonly used as portables.

Moving upwards, there is a notable dip towards the upper midrange/lower treble. On one hand the sculpted frequency response means that sibilance is left completely out of the equation. On the other, musical elements such as the shimmering of cymbals are significantly less obvious with the MS400 than my HD25-1. Treble does roll off earlier than I would like but I hesitate to say that the Phiatons are missing information at the top. The amazingly smooth upper end is sure to appeal to those who find the HD25-1 grating and unnatural but those who are used to prominent and effortless treble may be left slightly disappointed – the Phiatons definitely use high frequencies as a complement rather than the focus of the presentation. On the upside, this means that the MS400 play nice with low bitrate mp3 tracks straight out of an mp3 player. The rated 32 Ω impedance and 98 db sensitivity also result in a headphone that benefits little from a dedicated amp and yet manages to cut hiss from poor sources very efficiently. Straight out of the HPO of my Tianyun Zero, hiss levels were nearly identical to the 70 Ω HD25-1 – non-existent at listening volumes and whisper-quiet at full blast.

In terms of presentation, the MS400 is an intimate-sounding headphone. Soundstage width is fairly average for a portable headphone – wider than the HD25-1 or a Grado, but not up there with the K181DJ or Philips SHP5400. Unlike the HD25-1, which has a narrow soundstage and manages to sound pretty distant at the same time, the sound of the MS400 envelops the listener very closely and extends outwards from there. The effect resulting from combining an intimate presentation with a bass-heavy sound signature is engaging and captivating. Can the MS400 be considered true audiophile portables? Probably not. But moving back to my HD25-1 I couldn’t help but be disappointed by the cold brightness, distant presentation, and slightly metallic highs of my beloved Sennheisers.

Value (8/10): The Phiaton MS400 is pricy, no doubt about that, but like the HD25-1 its value rests not purely in the sound quality provided but in the total package. As such the MS400 are the most convenient and user-friendly headphones I’ve encountered north of $100. Build quality, isolation, and comfort are all far above average for a portable set. As an added bonus (or perhaps detriment), the contrasting red-and-black color scheme and earcups decked out in carbon fiber attract a lot of attention. I’ve worn dozens of different headphones to work in the past several years and none of them gathered as dense of a stream of interest, comments, and compliments as the Phiatons do. But of course even in a portable set sound quality should come first and the smooth and easy-going sound of the MS400 is very appealing in a portable. Like Ultrasone and AKG, Phiaton seems to understand that bass notes are the first to get drowned out on a busy city street, and the MS400 do a great job of compensating. Those in search of a more analytical signature should probably look elsewhere. For an involving, convenient, and strikingly beautiful audio experience on the go, however, the Phiatons come highly recommended.