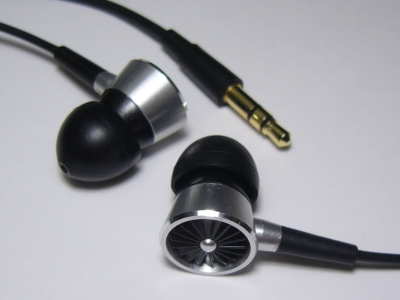 Accessories (4/5) – Single flange (3 sizes) silicone tips, airplane adapter, and hard foldout carrying case with integrated cable winder and tip storage
Build Quality (4/5) – Metal housings with filter-less plastic nozzles and purely ornamental plastic ‘turbine blades’ at the rear feel rock solid. Long strain reliefs protect the thicker-than-average cable, which has a slight tendency to maintain bends introduced by the rectangular cable winder
Isolation (4/5) – Surprisingly good with the ‘bulbous’ stock single-flange tips or Shure Olives
Microphonics (4/5) – Low when worn cable-down, nonexistent otherwise. Slightly susceptible to wind noise
Comfort (4/5) – The fit of the PS200s mimics that of the Monster Turbine earphones with one exception – unlike the straight-barrel Turbines, the PS200 housings flare outward at the rear. Those with smaller ears will likely find the diameter of the PS200 housings too great for long-term comfort. In addition, the BA-based Phiatons benefit from the deepest possible fit while the Turbines are more or less forgiving of a shallow (and therefore less intrusive) insertion depth

Sound (8.8/10) – The dual-armature Phiaton PS200 utilizes a passive crossover network to split the frequency spectrum between the two drivers. Like the majority of multiple-armature IEMs, the sound surprises with its ability to separate instruments and general attentiveness to detail. But let’s start at the bottom. The bass of the PS200 is unsurprisingly armature-like in nature – tight and very accurate but lacking a bit in both body and reverb. The low end isn’t quite as linear as that of the ATH-CK10, nor is it as hard-hitting as the ridiculously fast and punchy bass of the CK90Pro.

Bleed is expectedly non-existent and the mids are neither forward nor recessed, featuring astonishing clarity and detail. Coming from the dual-armature Audio-Technica IEMs, the PS200 maintains the astonishing clarity but makes gains in warmth and musicality. Strings sound crisp and natural and every nuance of the motion of piano keys is revealed. Moving on to the treble, it becomes quite obvious that the PS200 is overall a brighter-sounding earphone. It crosses the line between sparkle and sibilance quite often. It’s not a harsh or grating sound – just mildly sibilant with certain tracks. Having poorly recorded material exacerbates the problem greatly – those who still have a sizable number of 128kbps mp3s may want to give the Phiatons a pass. Aside from the occasional sibilance, the treble of the PS200 is incredibly competent – aggressive, clear, detailed, and chock-full of energy, it will not disappoint the most hardcore treble lovers. Cymbals shimmer with the excitement and authority that makes them so jarring in real life – an effect I simply don’t get from most other earphones. As far as portraying the full spectrum of treble energy goes, the PS200 is a hard act to follow.

Pretty treble isn’t the end of it, however – the dual-driver Phiatons have another ace up their sleeves – presentation. The soundstage width simply doesn’t get much better than this in an IEM – Sennheiser IE8 aside, the PS200 has what may be the widest and most evenly-spaced soundstage of all of the in-ears I’ve heard. They are also surprisingly adept at portraying intimacy when suitable and generally display admirable prowess when it comes to positioning. Though soundstage depth and height are fairly average, the massive width results in a very well-separated sound. A rather less pleasant surprise, however, is the level of hiss that the Phiatons exhibit when plugged into less-than-ideal sources. Despite their relatively high impedance and low sensitivity, the Phiatons hiss as much as the Fischer Audio Eternas.

Value (7.5/10) – Priced to compete with the likes of the Audio-Technica ATH-CK10/CK90Pro and Jays Q-Jays, the dual-armature Phiaton PS200 boasts low microphonics, solid build quality, very impressive isolation, and aesthetics Monster’s earphone division could envy. The sound is equally impressive – quick and accurate, but at the same time lively and quite bright. Those who can live with the lean bass and occasional mild sibilance are rewarded with an excellent soundstage, lifelike midrange, and incredibly fast and energetic treble, and, while the Phiatons certainly are not cheap, their signature is unique enough to warrant them a spot in the ranks of high-end in-ears.