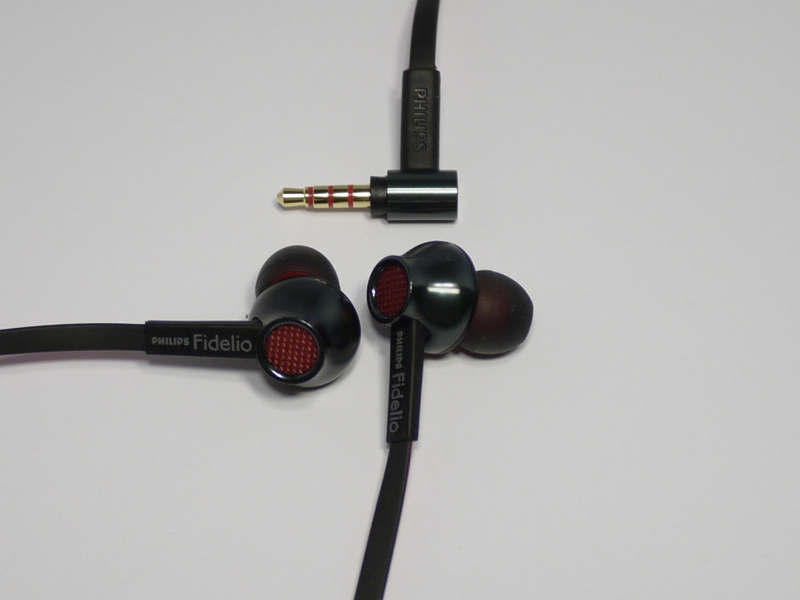 Brief: One of the two in-ears Philips deems worthy of the flagship “Fidelio” badge

Accessories (3.5/5) – Single-flange silicone tips (3 sizes), Comply S200 memory foam tips, and zippered clamshell carrying case
Build Quality (3/5) – The build quality of the Fidelio S1 and S2 earphones is extremely similar but the S1 features a cheap-looking plastic baffle at the front, in contrast to the all-metal S2. Issues have been reported with the seal around the front baffle on the S1. While this has not been the case with either of the two units I have, a nozzle filter detached on one of my units and had to be glued back in place. The S1 utilizes good-quality flat cables with an in-line microphone and single-button remote
Isolation (3/5) – Average, not as bad as could be expected from a shallow-fit design
Microphonics (4.5/5) – Good
Comfort (3.5/5) – The Fidelio S1 and S2 are built around 13.5mm dynamic drivers – large for IEMs, but definitely not unheard of. Philips chose a half in-ear form factor for the earphones, placing the driver enclosure in the outer ear with an angled nozzle fitting into the ear canal. This sacrifices some noise isolation for the comfort of a shallow seal, but the wide housings fitting 13.5mm drivers put a lower limit on the size of ears that will tolerate these earphones – smaller ears just won’t fit the housings comfortably

Sound (8.9/10) – Philips did a spectacularly good job with the tuning of their new high-end Fidelio line, both the two Fidelio in-ears and the on/over-ear models I tried at CES 2015. The Philips Fidelio in-ears sound clear and accurate with just the right amount of bass kick. The low end extends nicely, with very mild overall boost and medium impact reminiscent of the popular VSonic GR07.

The mids are crystal clear, with resolution to rival accuracy-oriented IEMs from VSonic and HiFiMan. The lack of bloat helps, allowing the bass of the Fidelio earphones to shine and keeping the midrange completely clear of bleed. Treble presence is good too – the earphones aren’t lacking at the top end for my tastes, and I’ve been known to enjoy a more energetic sound. At the same time, the treble is free of grain and harshness, though there is some upper midrange lift affecting the tone of guitars and vocals. In comparison, the VSonic GR07 sounds a little peaky and sibilant at the top end while the HiFiMan RE-400 is smoother and more laid-back.

The presentation boasts good width with average depth, reminding me of a slightly more mid-focused and less broad-sounding VSonic GR07. Curiously, the Fidelio earphones are not super efficient for a portable audio product and take more power to reach listening volume than much of the competition. This isn’t a problem except for those who gauge sound quality by maximum attainable volume – there’s still plenty of headroom with portable players. The earphones aren’t picky with sources, either, and sound decent enough from a sub-par Android phone.

There is one small caveat with the both the S1 and S2: they require a very good acoustic seal to perform their best. This is true for almost all IEMs but because of the shallow fit and near-neutral tuning of the Fidelios, there’s not much room for error. The large size of the housings and limited insertion depth play a factor as well. Without a good seal the bass quantity drops, the treble sounds a touch hot and spitty, and the presentation loses its depth.

The Philips Fidelio S1 and S2 really don’t differ much, especially when it comes to sound. In addition to its better build quality and fit kit, the pricier S2 model has a slightly more full-bodied sound with a touch more bass. Both can sound a little hot in the treble, especially without an optimal seal, but the S2 is a touch smoother with stock tips. At the same time, it maintains a marginally more airy sound than the lower-end model.

Like the dual-driver MOE-SS01, the Fidelio S1 boasts mildly enhanced bass and prominent, crisp upper mids and treble. The Philips earphones boast a touch more sub-bass weight compared to the MOE, sounding more solid when it comes to bass punch. Tonally, the Philips earphones are warmer, with mids that appear a bit fuller and smoother. The MOE-SS01 is brighter and harsher. It sounds a little less natural in terms of tone and timbre but easily keeps up in clarity and detail, which is impressive. The presentations tend to be similar, with pretty good width and average depth.

The Fidelio S1 offers up a more balanced sound while the hybrid BA + dynamic-driver AX-35 tends to be more v-shaped in response. The Astrotec unit has more bass but the extra enhancement comes in the mid-bass region, so it doesn’t have an advantage in bass depth. The Fidelio S1 is more mid-centric in comparison and has fuller, more fleshed-out mids, while the AX-35 is a little thinner-sounding. Neither unit is especially smooth – the S1 has some emphasis in the upper mid/lower treble region, which gives guitars a characteristic crunch, while the treble emphasis of the AX-35 comes in higher up, resulting in a slightly more sibilant sound. The AX-35 has a slightly more 3-dimensional presentation with better layering compared to the Philips, and is also noticeably more efficient.

Compared to HiFiMan’s similarly-priced RE-400 model, the S1 has better bass depth and more bass overall. However, it still sounds a little less full-bodied and not as warm. Its upper midrange and treble are more energetic whereas the RE-400 is smoother and more laid-back up top with a more forgiving treble character. The S1 also has a wider soundstage while the RE-400 is more intimate, but also more even in terms of depth and width.

The S1 is a balanced-sounding dynamic-driver earphone that reminds me in many ways of VSonic’s pricier dynamic-driver sets. Compared to the balanced armature-driven VC1000, it boasts more bass, especially deep bass, and has a warmer overall tone. While less powerful, the low end of the VC1000 is tighter and a bit clearer. Its midrange is more prominent in comparison, and on the whole the VC1000 sounds more mid-centric next to the Fidelio S1. Interestingly, while the VC1000 boasts similar, or even slightly greater, treble energy, it actually does a better job of keeping its treble smooth. The Fidelio S1 appears a little harsher and peakier, and tends to be even less forgiving than the VC1000, which itself is not exactly smoothed-over.

Value (8.5/10) – The Philips Fidelio S1 earphones are well-designed, user-friendly, and have good fit and finish. Offering a flat and level signature with a bump across the bass range, the Fidelio models also feature tangle-resistant cabling and a built-in microphone and remote. The semi-open design makes them great in situations where the higher noise isolation of most other high-end earphones is undesirable—and a great choice for those who don’t like the more intrusive fit of most other IEMs. The only thing that would steer me away from recommending them is the price of the higher-end Fidelio S2 dropping ever close in today’s market.