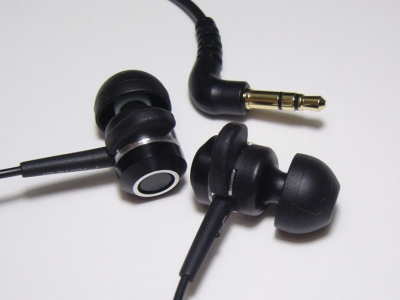 Accessories (2/5) – Single-flange silicone tips (4 sizes) and shirt clip
Build Quality (4/5) – Though Pioneer advertises the CLX60 as having ‘aluminum housings’, it is only the rear part of the shells that is aluminum. The front half, including the nozzle, is plastic and the protrusion on the side of the housings is made of hard rubber. In addition to conventional L/R markings and the asymmetric design, the CLX60 also has a red filter on the right-side nozzle (a-la Earjax Tonix) for easy identification. The cable is reasonably sturdy and very well-relieved but feels plasticky and has a bit of memory character
Isolation (3/5) – Average due to large size and vented housings
Microphonics (4/5) – Quite low with cable-down wear; nonexistent when worn cord-up
Comfort (3.5/5) – Though Pioneer advertises the CLX60 as a ‘Flex Nozzle’ design (a-la CLX50), the nozzles are actually fixed-angle and don’t flex at all. The only thing that flexes (barely) is the rubber extension on the side of the housings, which is designed to hold the earphones in place and cannot be removed by design. The shells of the CLX60 are quite large (about 40% larger than those of the RE0 in every dimension) but light and not uncomfortable. Though the ear hook does keep the CLX60 in place quite well, my ears get sore in 2-3 hours from the pressure exerted by the housings, partly due to the nozzles not being angled enough for my liking

Sound (7.2/10) – Though the general sound signature of the CLX60 is not all that different from the lower-end CLX50, there is one marked difference between the two – the amount of bass boost present. While the CLX50 can easily be called bass-heavy, the bass of the CLX60 is on-par with reasonably balanced sets such as the Meelec CC51 and Fischer Audio Silver Bullet. I find it interesting that Pioneer chose the CLX50 to be its flagship in the US market and not the more balanced CLX60 but perhaps the decision had nothing to do with the earphones’ sonic characteristics. In general, the low end of the CLX60 is tight and punchy. Compared to the lower-end model, the CLX60 is missing a bit of bass body, sounding leaner and thinner both at the low end and in the midrange. As a result, the overall bass quantity of the CLX60 seems to be only slightly greater than with the HiFiMan RE-ZERO despite the noticeably greater impact.

On the upside, the bass does not bleed into the midrange, which is crisp, smooth, and very clear. Though the entire midrange is slightly forward compared to the bass, the upper midrange is particularly strong and the overall balance reminds me of the Maximo iM-590. Guitars are given ample bite and most vocals come across with authority. The accentuated upper midrange gives the headphones a bright overall tone and draws more attention to the clarity. Transparency is quite decent as well and there is absolutely no veil over the mids. Unlike the iM-590, which can be a tiny bit sibilant, the treble of the CLX60 smoothes out before sibilance can become an issue all the while maintaining a high level of treble sparkle. Treble clarity and extension are again quite good just as they are with the cheaper CLX50.

The presentation, too, is reminiscent of the CLX50 – the earphones sound very airy and the soundstage has good width and decent depth. Instrumental separation and positioning are both quite impressive for a mid-range dynamic though there seems to be an inner limit to the soundstage. On the whole, the CLX60 is a competent performer – not neutral by any means but fun in a bright-and-colored way. The sound signature can get tiring after a while and the timbre is a tad off to my ears, putting the CLX60 in the same boat as the Denon AH-C710 and Monster Lil’ Jamz, but after listening to more conventional dynamic-driver earphones, the Pioneers are at the very least unique and refreshing. Also worth mentioning is the bit of background hiss exhibited by the CLX60 with most portable amps and DACs – in daily use the CLX60 appears a bit more sensitive than the specs imply.

Value (7.5/10) – With the SE-CLX60 boasting superior ergonomics, solid overall sound quality, and a more unique sound signature compared to the lower-end CLX50, I can only assume that Pioneer made the CLX50 their US flagship by mistake. Though the earphone has little going for it in terms of accessories, the build quality is good and microphonics are quite low, making it well-suited for day-to-day use. The sound signature is interesting as well – well-balanced and spacious with emphasis on the upper midrange and a brighter overall tone. It’s worth noting that the sheer size of the shells may lead to fit problems for some and there are ergonomically-designed earphones with better nozzle angles out there. As a total package, however, the CLX60 is quite good for an earphone from a mainstream manufacturer and may be worth a look for those who don’t have to import it.