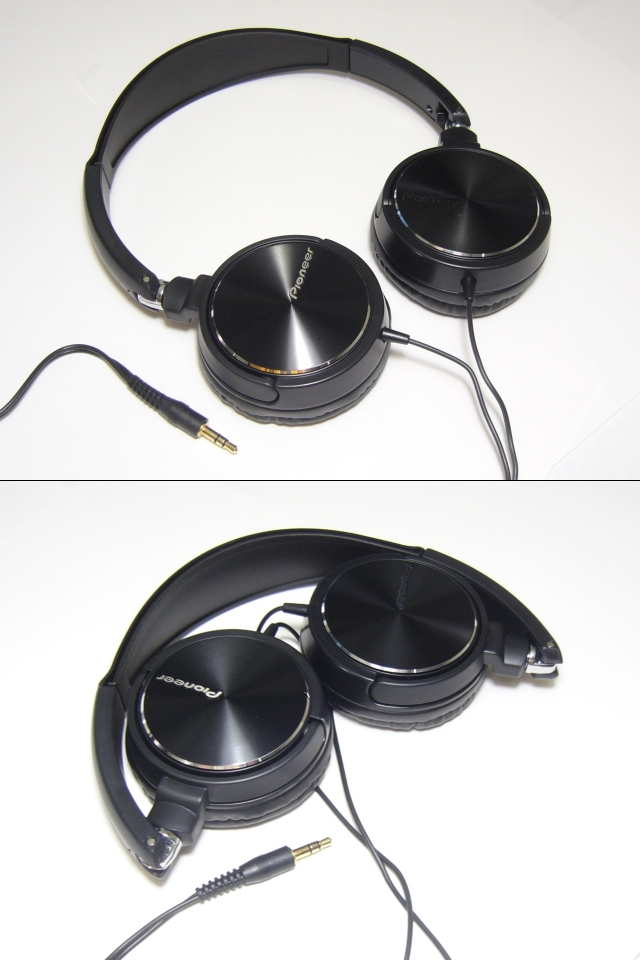 Build Quality (5/10): The polished stainless steel looks are what attracted me to the MJ71 in the first place – stock photos make the headphone look stylish, understated, and vaguely reminiscent of Audio-Technica’s Earsuit line. Unfortunately, there is very little to like about the MJ71 aside from the finish of the earcups. The headband is completely plastic and suffers from mediocre molding quality. The last time I came across a headband that looked and felt this cheap, it was attached to the $7 Coby CV163. The notched headband extension mechanism feels equally rough and the rotating joints, despite the metal-like appearance, are chromed plastic. Pioneer boasts of the MJ71’s DJ-inspired styling, which presumably refers to the flat-folding earcups and fully collapsible design, but none of the moving parts feel like they will last. The dual-sided cord is also plasticky and cheap-feeling. All I can compliment Pioneer on are the pads, which are nowhere near as sub-par as the rest of the headphone, and the clever red/black color-coded grilles, which act as left/right markings.

Comfort (7.5/10): The fit of the MJ71 is typical of a supraaural DJ-style headphone. It clamps a little harder than the MEElec HT21 and gets painful to wear a bit quicker but on the whole is quite tolerable. The earpads are soft enough and don’t heat up too quickly but the plastic headband is unpadded.

Isolation (6/10): Isolation is about average for a small closed headphone – there is a good amount of flexibility to the fit and the pads can seal reasonably well. Sound leakage is respectably low.

Sound (4.25/10): If the construction quality and choice of materials deliver a heavy blow to the Pioneer SE-MJ71, the audio quality makes sure that the headphones stay down for the count. Pioneer offers up claims of “professionally-inspired tuning” and “full, accurate performance”, which are interesting only because the SE-MJ71 offers none of those things.

The MJ71 has three major weaknesses – bass, treble, and presentation. The bass is forward, deep, and strong but tends to lack control and clarity. I’ve certainly heard worse but not from something with an $80 retail price – the Pioneers are only a little tighter at the bottom end than the fashion-oriented Coloud Colors. What little control there is drops even further once several instruments are in play due to the poor resolution and driver speed – the MJ71 just gives up and falls into a muddy abyss when the track gets busy. An additional issue is a strange echoing/resonance against the earcups heard on strong bass lines. Overall not a very realistic bass experience.

The midrange is clearer and less offensive on the whole than the low end. The bass is strong enough to make the balance seem slightly skewed away from the midrange but overall the MJ71 is a forward headphone. It manages to pull away from the veiled and muddy sound of the Coloud Colors in the midrange but sacrifices a bit of the smoothness as well. The upper midrange and treble are quite prominent and the MJ71 isn’t warm or thick-sounding. The highs are bright and slightly thin, leading to a ‘tinny’ sound. There are some narrow treble peaks that cause the MJ71 to sound overly harsh with certain tracks. It is a fatiguing, shiny, metallic sound that doesn’t sit well with me at all. I still prefer the balance of the MJ71 to something with severely rolled-off treble (e.g. the UrbanEars Plattan), but only just. Treble roll-off still occurs slightly earlier than one would expect considering how aggressive the top end is on the whole but the headphone does not sound dark, dull, or stuffy. Still, the presentation is aggressive and congested. The soundstage is smaller than with the UrbanEars and far more confined than with similarly-priced open sets such as the Sennheiser PX100-II.

Value (4.5/10): I wanted to like the SE-MJ71 for its looks and portability but from the very first listen I have felt that Pioneer missed the mark by a mile with the $80 MSRP. Prices have been dropping across the board over the past couple of months but even at a third of the original price I still don’t see a competitive product here. The construction quality is underwhelming and, aside from reasonably clear mids, the sound quality is sub-par. My advice – look to Audio-Technica if you are attracted by the cosmetics of the MJ71 or to headphones priced well from the start if you’re attracted to the current low price. Sets such as the MEElec HT-21, Denon P372, Sennheiser PX90, and Koss PortaPro will walk all over the Pioneers without having to be massively discounted. Not recommended.