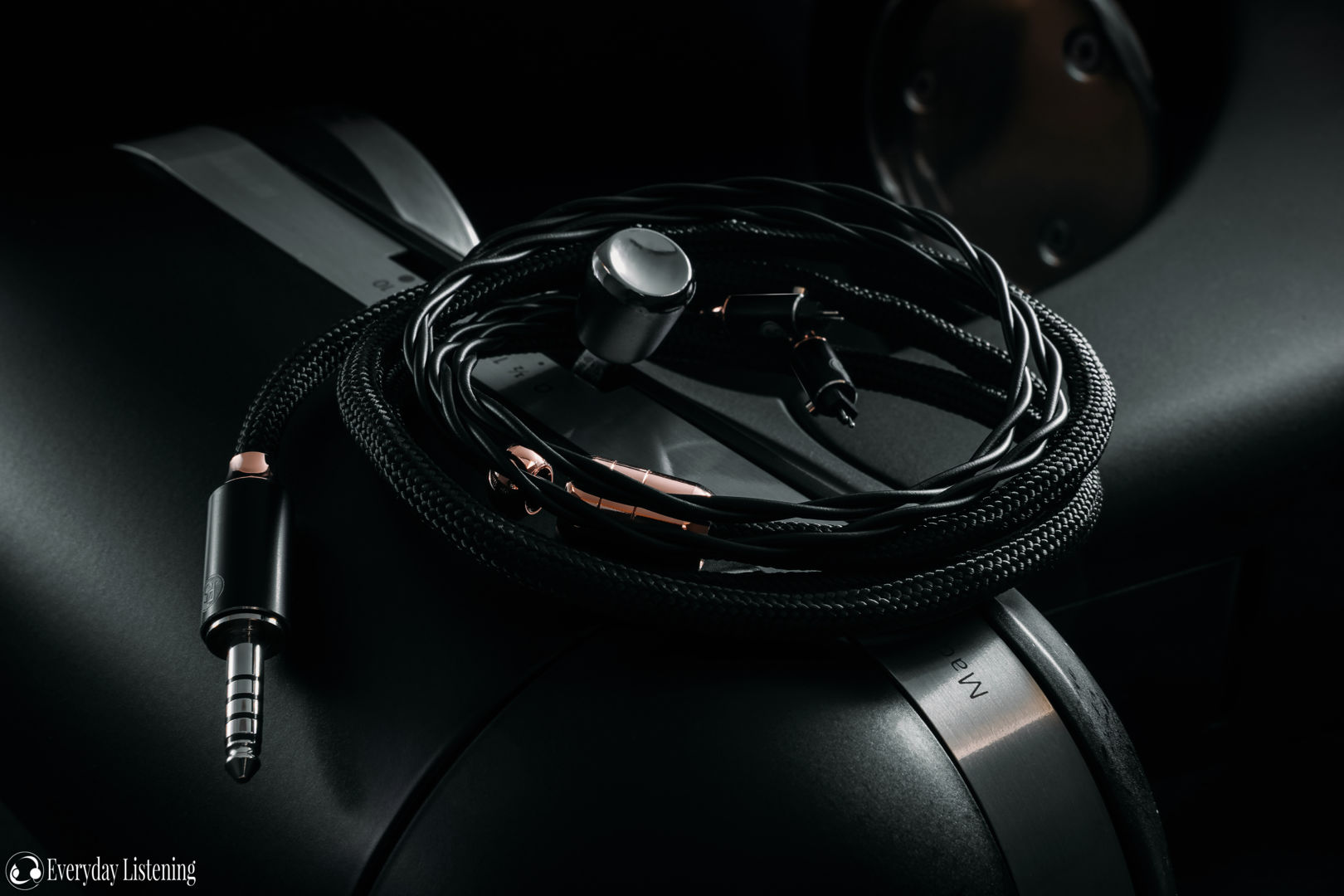 The influx of high-end copper cables has been intriguing as this type of conductor doesn’t really introduce any tonal characteristics out of the ordinary. From this perspective, maximizing a copper-based design makes a lot of sense if one were wanting to create a linear upgrade with minimal impact on timbral accuracy. The Copper+ is such a creation, a euphonic, warm-leaning but never stuffy sounding cable. It has a very clean background imbuing awesome spatial characteristics and layering. As it provides a proportional increases in both soundstage space and note size, the Copper+ is defined by its noticeably more weighted and powerful sound than your typical OFC cable – and most copper wires for that matter.

That means, compared to something like the Socrates, the Copper+ doesn’t have the same dynamic nature and attack, but comes off as slightly more focused on providing a rich tonality over a huge technical bump when zooming in on individual note presentation. However, in this respect, the Copper+ does represent a sizable increase in overall cleanliness over the previously released Tri-Copper and cannot be considered technically inept despite this not being the overt focus. From my experience with this style of cable, I would posit that Christian has struck a good balance between tonal and technical change and provided a cable with an altogether sweet, pleasant and widely appealing sound profile.

Like most copper cables, the Copper+ provides a robust and medium warm bass presentation. To my ears, it provides a mostly linear lift to both sub and mid-bass so, while warmth and fullness are enhanced, notes don’t become rounded or tubby either. The Copper+ is defined rather by its structured, thick and well-weighted note presentation. While not as bold and attack focused as something like the Socrates nor as explicitly focused on rumble and slam, these elements do become more apparent. This instigates an emboldened, slightly enriched note presentation through the bass and midrange without excessive fuzz and warmth, rather, a good enhancement to overall coherence and spatial characteristics. The Copper+ places equal emphasis on slam, punch and decay which enhances its genre versatility.

Unlike many bass focused cables, the Copper+ does not have an especially fast or aggressive note presentation. It remains well-controlled and far more assertive than your average copper cable, if to a lesser extent than some high-end copper cables. In addition, decay lingers a little longer, providing a more textured and organic over pacey and dynamic image. Regardless, the mid-bass did impress me with its rich and well-textured presentation again, without roundness or bloat of any kind. Though not focused on speed, this permits a surprisingly articulate sound, delivering a sizable bump in note definition. As note size is also increased, separation isn’t its defining characteristic. However, the minimal smear and fuzz means you still get a more resolved bass in addition to enhancements in size and power.

The midrange carries over similar qualities from the bass. However, I didn’t feel this could be attributed entirely to greater bass presence, but likely stems from a slightly more prominent lower-midrange too. Accordingly, the tonality isn’t exceedingly warm, only introducing tinges of subtle colouration most noticeable on male vocals. In general, like the bass, the Copper+ is more defined by its structure and body. It has a slight roominess to its sound, but not to the extent of boxiness or congestion on most pairings. In fact, separation and vocal clarity are surprisingly good, if not the highlight, with general improvements to note definition and sheer soundstage dimensions. The cleanliness of the background aids this both perceived separation and fine detail retrieval immensely, this is surely one of the defining features of this cable and will be discussed further below. Otherwise, vocals do steal the show, being enlarged and beautifully filled-in with rich body and light, euphonic warmth.

This is in contrast to the Tri-Copper and its more obvious warmth and fuzz, the Copper+ comes across as the cleaner and more complex cable whilst retaining many of the same upsides, relinquishing only some of its richness. However, the Copper+ does run the risk of being a one-trick pony, due to its low-end lift without compensatory treble/upper-mid emphasis. This does mean that it is strictly a coherent and structure-focused cable, clarity is only kept in check due to the moderation of enhancements in these regions and lift in vocal size. Those wanting a revealing or airy sound should keep this in mind. Altogether, the Copper+ manages to introduce a grander, richer sound whilst retaining a natural timbre. Its superb layering and size work wonders for coherence though due to its less revealing nature, can take time to appreciate.

Intriguingly, the Copper+ has a slightly smoother top-end yet with a highly resolved foreground and superb background cleanliness. In turn, though treble doesn’t stand out with the same crunch, energy and sharpness as many cables, it has a lot of pop and bite with a defined leading edge and awesome foreground/background contrast. I find this a very appealing presentation as the lack of brightness is more forgiving and aids the perception of space and distance. It also means that the cable is able to achieve a clear and detailed treble that is simultaneously smooth and textured. Notes are full-bodied and richly textured. Separation is enhanced due to the increase in note definition and sharper attack which keeps the presentation focused and engaging.

The issue here again, is on earphones that already possess a darker background. Here, you run the risk of skewing overly dark, to the detriment of air. However, I found this was a relatively uncommon occurrence on the majority of pairings. The reason being, the Copper+ has a sweet and well-extended top-end with a subtle sparkle. This helps to retain openness, atmosphere and general sense of room and space in context of its black, clean background. In turn, a highlight of its presentation is undoubtedly its layering. Though it doesn’t provide a huge number of layers, the background comes across as especially well-resolved. The Copper+ has a well-refined and resolved top-end that is simultaneously forgiving. Though air isn’t overt, I would argue that this aspect won’t polarize as the cable crafts an impressively spacious and extended image.

The Copper+ is defined by its exceptional soundstage width, some of the best I’ve heard. Depth also isn’t neglected but doesn’t extend to the same degree. Meanwhile, imaging is sharp, perhaps not as fast and holographic as something like the PPH nor as pinpoint precise. The highlight it its layering, more specially its hyper-defined foreground/background combined with its slight roominess gives it a very immersive character. I also admire the liquid smoothness with which backing instruments and vocals fade in and out, no doubt, the cleanliness of the background plays into this greatly. Separation is above average but not exceptional due to its generally full-bodied nature. It cannot be considered poor as note definition remains strong and, in turn, never smears or masks fine details. However, at the same time, there isn’t much air surrounding each element.

Soft Ears RS10 ($2099): This was a pairing that I didn’t enjoy as much as I would have expected to. Perhaps this is because I love the stock tonality on the RS10, that means any colouration isn’t exactly a positive even if that is working to even out the signature. The Copper+ provided nice changes in the bass, improvements in depth and body, introducing medium warmth on top. The added mid-bass helps to balance out the sub-bass biased presentation. The added lower-mid presence is also welcome, though I found the introduction of warmth in the midrange did affect separation and cleanliness, this IEM’s defining traits. This was my main point of contention. Treble was a good match, offering awesome detail retrieval in the foreground and similarly standout background cleanliness. Imaging and soundstage width were both outstanding on this pairing.

Soft Ears Cerberus ($2099): Conversely, this pairing very much surprised me given the Cerberus is already warm and smooth leaning – however, I found the Copper+ to be a wonderful complement to this. Bass was granted increased power and mid-bass warmth. The uptick in note definition were very welcome whilst retaining the beautiful texture inherent to the Cerberus. The midrange too wasn’t too stuffy as this earphone doesn’t have an especially present bass. Though a little thick and roomy, I enjoyed the euphonic analogue tonality which was enriched by the Copper+. The increase in vocal size especially aids definition to a good degree. Similarly, the top-end has a smooth note presentation and excellent background cleanliness, though isn’t lacking in quantity to my ears. The Copper+ helps to provide a bit more bite and definition whilst upholding an immaculate background and further enhancing the Cerberus’ already superb soundstage width.

MMR Balmung ($2799): The Copper+ imbues a softer character into the Balmung which would suit if you love warmth, but here it may be too excessive. Bass is monstruous on this pairing, increased in weight, depth and overall impact. The stock cable is a little cleaner tonally but not as dynamic and textured as the Copper+. The midrange was somewhat contentious here, the Copper+ increases body and warmth further, providing perfectly filled-in notes. However, the Balmung is already quite warm leaning so the added clarity provided by the stock silver cable was appreciated. In terms of resolving power, the Copper+ does have an advantage, but this is difficult to appreciate due to the drop in separation. The same goes for the top-end. Indeed, notes are more defined but they are noticeably more laid-back than stock. The Balmung doesn’t require a smoother, darker top-end, I found balance superior on the stock cable overall.

Empire Ears Odin ($3399): Strangely, on the Odin, the Copper+ and 1960s have very different effects as on most of my other IEMs.The Copper+ provides a slightly deeper extending, weightier sub-bass than the 1960s. It has altogether, slightly more bass body and greater impact. The 1960s is slightly more mid-bass biased. Though slightly more separated, it lacked the same physicality and texture. The midrange, almost exclusively on this pair up, was more revealing on the Copper+. It introduces a bit more room and body in the lower-midrange but enhanced vocal size to a greater degree. Resolution is slightly higher on the Copper+ while the 1960s is a bit more articulate and delicate though less textured and substantial. The 1960s has a slightly crisper lower-treble while the Copper+ provides a bit more bite. The Copper+ here also did provide a bit more extension and a larger, wider soundstage. Altogether, this is a great match for the Odin so long as you don’t mind a slightly more bombastic bass.

The Copper+ has two chief synergies, that being for those with neutral/lean IEMs wanting a bit more substance, and those with a clean, dark earphone wanting to maximise that quality. The most contentious pairings were the bassy earphones in my collection. I found the tonality could be pushed overly warm and the midrange became too roomy, reducing separation. While the technical benefits are always present, these characteristics can make it difficult to appreciate. Otherwise, I don’t want my description of the bass enhancement to come across as enormous, it surely isn’t to the extent that you would transform an IEM. For all intents, treat this like your vanilla copper cable when considering synergy.