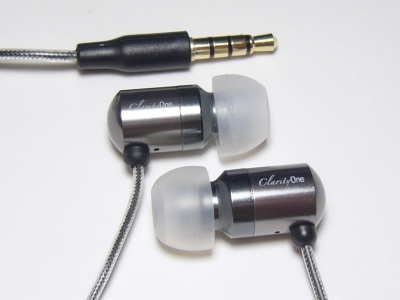 Sound (7.9/10) – In contrast to the marketing efforts of most mainstream brands, the ClarityOne website concentrates largely on sound quality. The earphones are promised to deliver, among other things, “the clearest, truest, best sound on the market today” and “the ultimate in 3-dimentional (sic) listening experience”. A company that promises “perfect sound quality” and focuses on audio rather than cosmetics and endorsements certainly gets my attention, but separating expectations from reality can be rather difficult.

There are some potential pitfalls, including the low impedance of the earphones. Claimed to increase battery life despite the higher current draw, the 8-ohm impedance of the C1 can be problematic when coupled with sources that have high output impedance – the earphones will exhibit varying amounts of bass roll-off, though the effects will likely be mild with most portable players. Hiss is a bigger problem – when using a source with moderate background noise levels, hiss is very evident and background electrical noises can be audible as well.

Source matching issues aside, the bass is probably the best aspect of the C1’s sound. Bass response is punchy and well-measured, with good depth and power – visceral, but not overblown. There is a mid-bass hump but nothing that affects resolution or causes the low end to sound bloated – the bass may not be as quick as that of the average armature-based earphone but it performs very well among similarly-priced dynamic IEMs. The C1 offers up both more impact and better control than the MEElectronics CC51 and HiSoundAudio Crystal, for example, though its aggressive bass is not quite as tight as with the higher-priced VSonic GR07 and JVC FXT90.

The midrange of the C1 is clean and detailed. Despite the mid-bass lift, bleed is nearly nonexistent and the mids are only slightly warm. The bass and treble stand out in relative emphasis but the slightly recessed mids are still plenty aggressive. Peaks in the upper midrange and treble regions tend to exaggerate the clarity – an effect akin to using a treble-boosting equalizer. Natural clarity is good for a mid-tier dynamic – on-par with Sennheiser’s IE6 and IE7 – but certainly not revolutionary as the name may imply. It trails armature-based sets such as Fischer’s SBA-03 and Etymotic HF5, as well as pricier dynamics such as the VSonic GR07 and Sony MDR-EX600. The abovementioned earphones are also a touch more detailed than the C1, though none place nearly as much emphasis on the bass.

The top end unevenness does more than affect the clarity of the C1 – the upper midrange has a tendency to sound a touch shrill. Vocals also seem a tad ‘nasal’ at times and timbre doesn’t particularly impress, especially with stringed instruments. ‘Colored’ is clearly a term applicable to the C1’s sound. Cymbals are very prominent, even dominant at times. The treble is shimmery, aggressive, and energetic, but also fatiguing on occasion. With the wrong tips, the C1 can be sibilant and even with a good aftermarket set, such as Comply T400s or a deep-fitting tri-flange, sibilance-prone recordings can be problematic. It doesn’t help that the note thickness of the C1 is on the low side compared to sets like the JVC HA-FXT90.

The presentation of the C1 is far less enigmatic than the sound signature. It gives a good sense of space – better than the MEElec CC51 or HiSound Crystal – but stops short of the ambient, 3-dimensional soundstages offered by some higher-end models. Instrument separation is good and the positioning is adequate but compared to sets such as the Sony EX600 and VSonic GR07 it all sounds quite in-the-head. Imaging lags slightly behind the JVC HA-FXT90 but dynamics are well above-average despite the sound of the C1 being rather aggressive. Again, it puts on the best show at lower volumes, though due to the high sensitivity of the earphones certain players are too loud even at minimum output.

Value (8/10) – The ClarityOne EB110 is a competent mid-range dynamic-driver earphone in a conventional form factor. Minor omissions such as nozzle filters, molded strain reliefs, and alternate types of eartips are mostly made up for by the noise-free cable, sturdy shells, and mic/remote unit. PureSound’s marketing sets expectations for the earphone’s sound a bit high, however – the C1 is neither revolutionary in audio quality nor aimed at absolute fidelity with its sound signature. Instead, it is a fun-sounding IEM with few claims to accuracy or neutrality, but one that will be instantly impressive to fans of crisp, punchy, aggressive sound as well as anyone coming from stock earbuds or entry-level headphones.