Bass
Maestro’s bass has an engaging quality; it has nice body, and conveys a rounded feel, with a slightly above average quantity. It’s a punchy, well-defined bass, that adds body to the sound – the result of a fairly linear relationship between the sub- and mid-bass. It carries enough weight to let its presence known, while remaining light and airy. A controlled bass. Unique Melody achieved this by means of a clever dip in the upper-bass, which plays an important role in creating the airiness and open feel of its stage. Accordingly, it’s a relatively tight bass despite its quantity, that sounds airy, rather than warm.

The bass is quick enough to keep up with the general pace of the music, while a slight decay sustains a sense of naturalness. However, its bottom-end extension is only average at best; the Maestro doesn’t seem to reach to the lowest registers, providing that deep bodily feel. So it’s not necessarily a hard-hitting bass in terms of impact, but it’s a pleasing bass to hear. The tone of the mid-bass is above average, and its definition is quite good. Taken together, it’s a fun bass to listen to due to its nice body, which adds a sense of dynamism to the music. But importantly, while maintaining an airy presentation.

Midrange
The Maestro’s midrange is fairly neutral in tone, with slightly forward vocals. The mid-bass provides a subtle hint of warmth and fill to the lower midrange, although warmth isn’t a dominant factor in describing the Maestro – it mostly sounds clear. It’s a midrange that’s only slightly warm; an essential touch of warmth for the naturalness of its sound. In addition, the Maestro further impresses with its full-bodied instruments. It’s an articulated yet smooth presentation, with authority in its sound. Accordingly, the Maestro is versatile, easily lending itself for different genres. The nicely-sized instruments fill up the stage, and contribute to an overall full and engaging sound. It’s a presentation that the Maestro handles effortlessly without tending to congestion, due to its spacious stage.

But besides their size and stage positioning, instruments primarily excel in their timbre. Not a glorified portrayal, an overly romantic depiction oozing in warmth, or lighting up with sparkle. There doesn’t seem to be an added flavor, but that’s exactly where its strength lies. Whether band-based instruments as acoustic or electric guitars, drums, or string instruments – the Maestro is one of the truest-sounding monitors, and a top pick for classical music relying on timbre. Especially the stroke of a violin seems to display a rare sense of realism, sounding remarkably clear, yet never bright. Even so, its timbre could be ever so slightly warmer, to sound completely accurate. But this is mostly being overly critical, so feel free to ignore this. For instance, the UE18+ Pro by contrast could equally be considered slightly warmer than accurate. The point being, they are both top performers when it comes to timbre, though arriving from different directions. 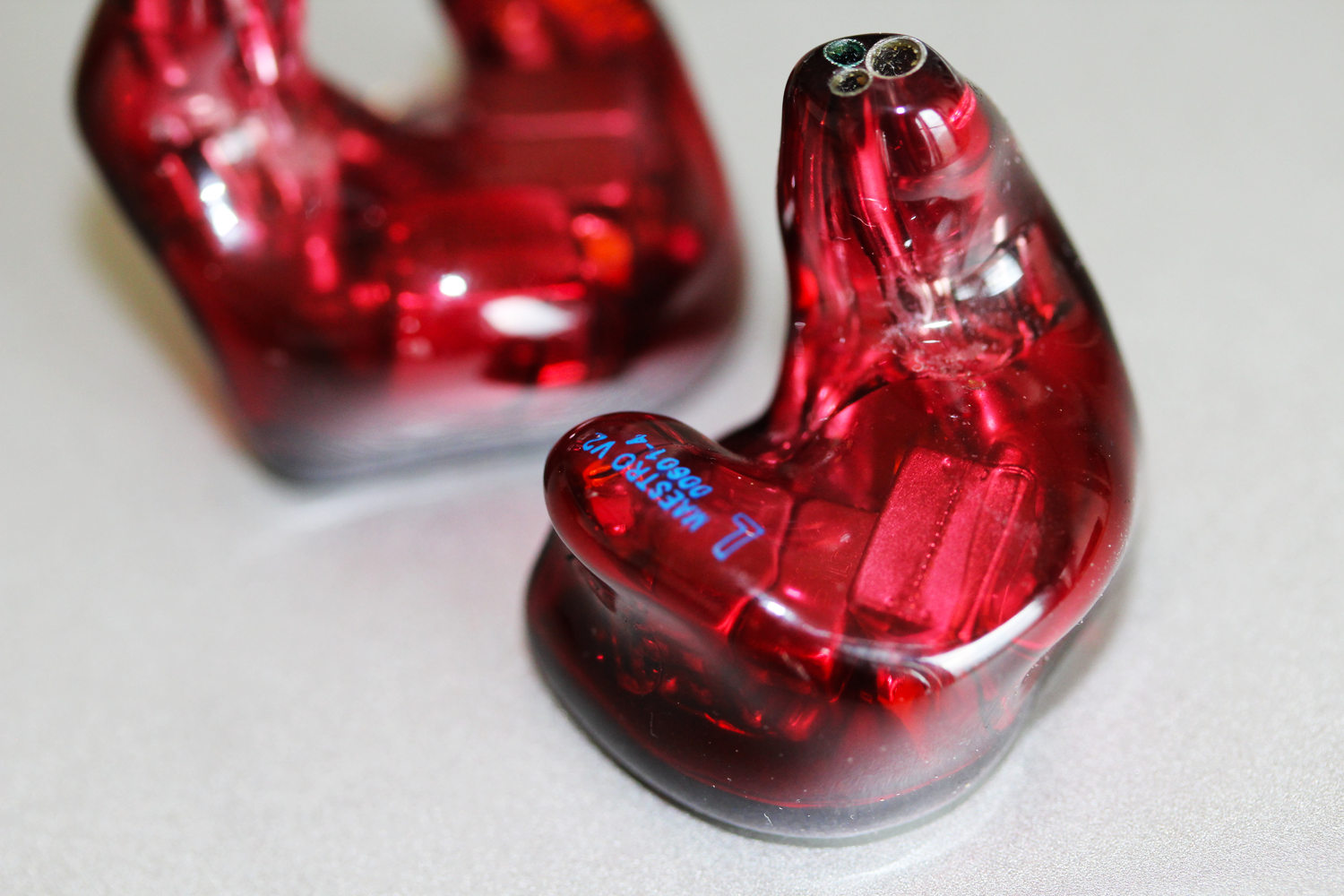 Similarly, Maestro has a slightly forward, and especially balanced vocal presentation. It doesn’t necessarily produce very dense or powerful vocals, but they sound clear, are nice in size, and smooth in their articulation. And importantly, the pronunciation is balanced throughout the vocal range – neither the low or higher-end is under- or over-emphasized. They aren’t overly warm, but are realistic in their portrayal, both in definition and tone. Accordingly, the Maestro doesn’t seem to favor either female or male vocals, performing well with either. It’s a vocal presentation that complements the size and tone of its instruments.

Treble
The Maestro’s treble sounds just about right. While this might come across as a thinly veiled declaration of mediocrity, the opposite is very much true. The treble tuning is by nature, one of the most difficult aspects to get right. It not only affects the timbre of the treble itself, but plays an instrumental role in determining the overall tone, as well as performance. The Maestro’s treble sounds very accurate, an above average performance. Neither overly sparkly, nor laid-back. Just clear, with a modest touch of sparkle. And a natural decay certainly helps. It’s an accurate depiction of how one might expect a treble note to sound, without coloration in its tone. A realistic portrayal of treble notes, allowing them to shine for just sounding true.

UM achieved this tuning by a characteristic peak around 6 KHz, followed by a strong dip in the mid-treble region. The 6 KHz is a critical region, that easily results in harshness when overly pronounced. But by attenuating the mid-treble region, UM not only balanced the tone, but created a clear and detailed treble, that simultaneously remains smooth. It’s a tuning that reveals Unique Melody’s intended tuning for timbre, and the overall coherency of the presentation. For the Maestro’s treble works wonderfully with its midrange, creating a relatively uncolored, yet musical sound. Finally, Maestro’s top-end extension is only slightly greater than average, dropping off after a final 12 KHz peak provides an extra touch of clarity to the overall sound.