Home » Articles » Guest Post: The “Re-Evolution” of Sound
a

Looking back, it seems quaint that the ability to reproduce recorded sound was introduced to the public with a simple recitation of “Mary Had A Little Lamb.” The year was 1877 when prolific American inventor Thomas Edison, a man whose creations earned more than 2,300 patents worldwide, invented what he called the “phonograph.” To introduce his invention to prospective investors, he would read the aforementioned children’s poem into a microphone, then push a button that would cause his voice to be heard through the speaker—to the immense amazement of his audience.

The genius of Edison’s phonograph was that while others had previously produced devices that could record sounds, Edison’s was the first that was able to reproduce, or “play back,” that recorded sound.

The phonograph was a milestone because it allowed the listener to hear music or spoken-word performances outside the doors of the opera house, vaudeville emporium or theater stage. The phonograph’s invention also created a new job description: “audio engineer,” or someone who develops listening technologies that have the capability to advance the scientific understanding and reproduction of sound.

By the 1930s, audio engineers, through years of trial and error, had determined that vinyl was the best medium for the placement of recorded sound, whether it be music, a recorded speech or a comedy routine from Buster Keaton. Specifically, the sound would be etched into a vinyl disc. When the disc’s groove was touched by a “needle” encased in a stylus the sound would be reproduced through the phonograph’s speakers. 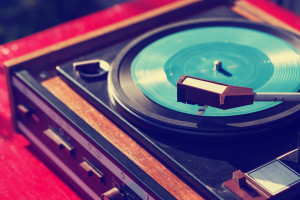 By the 1950s, the phonograph’s sound-reproduction capabilities had grown to the point that high-fidelity stereo systems with stereophonic sound were being produced and marketed. The discovery of “hi-fi” stereophonic sound was a major breakthrough for the music-listening experience, which could now be reproduced through two or more channels of transmission, allowing the sound to “surround” the listener.

The discovery of new listening technologies were in tune with the demands of a new class of listeners—commonly called “audiophiles”—who wanted to experience music in its purest form. These two groups began to work in concert, the audio engineer reliably improving listening technology and the audiophile purchasing as a way to hear music the way it was meant to be heard.

The partnership between engineer and audiophile reached its apex when a new album was released. That’s when the audiophiles would gather in anticipation, delicately place the needle on the album, then marvel at the sounds that were reproduced. Afterward, their recommendations would introduce more listeners to the glories of stereophonic sound, which would create a larger market for stereophonic equipment.

It soon became obvious that listeners would want to take their music with them. Sure, you could listen to music or the ballgame on a transistor or car radio, but, especially in the case of music, there was little control over what songs were heard, and when. For a solution, the audio engineers went back to the drawing board and emerged with an array of technologies that would make portable listening readily available, with each new invention further increasing the mobility of music:

• Stereo 8: Commonly known as “8-Track Tape,” Stereo 8, which was invented in 1964, uses a magnetic tape to record sound. Its popularity through the late-1970s and was driven by the 8-Track stereo systems that could be installed in vehicles. The 8-Track was the first portable-listening format that allowed listeners to take music wherever they went in their car.

• Compact Cassette: Following 8-Track listening technology was the Compact Cassette, or cassette/audio tape. It’s smaller size made it easier to store in the car, which led to a wider range of listening options. The cassette tape made a further name for itself in the 1980s with the introduction of portable pocket recorders and players, such as the Sony® WalkmanTM, which was released in late 1979.

• Compact Discs: Available since 1982, audio CDs and their players had all of the benefits of cassette tapes—small footprint, good sound quality, portability—and the Walkmans and home/vehicle stereo systems of the world could be easily upgraded to accept CDs.

• Mobile Devices: MPEG-1/MPEG-2 Audio Layer III listening technology— known universally as MP3—was standardized in 1991. MP3 recording significantly reduced the amount of data required to reproduce the audio recording and still sound like the reproduction of the uncompressed audio. In other words, MP3 technology meant listeners could put 10,000 songs in their pocket. The most famous iteration of portable MP3 technology is Apple, Inc.’s iPod, which was released in late 2001.

The quest for portability did, however, have an effect on the sound quality that was reproduced. A high-end vehicle or home sound system can feature top-of-the-line speakers and components that can recreate the pristine sound quality and clarity that is demanded, but portable listening devices do not have the capability to incorporate high-end speaker systems into their design because then their portability would be compromised.

Thus, there had been some level of tradeoff when considering the sound-reproduction capabilities of portable listening devices – some degree of sacrificing sound quality for enhanced mobility. However, ongoing advancements in broadband streaming audio means that even the smallest listening device is now capable of producing optimized sound quality.

Striking a Balance Between Quality and Portability

Audio engineers have developed technologies that give recordings the highest level of mobility, but they have also been tasked with creating equipment that delivers a high-performance listening experience. While it’s nice that an MP3 player can put thousands of songs at the touch of the listener’s fingertips, the benefit is lost if the sound clarity is compromised.

Thankfully, the increased capabilities of higher-resolution audio data formats, which are supported by significant advances in the cost and size of storage media, is dictating the development of high-fidelity portable listening devices that mirror the push toward audio formats with better sound clarity. This so-called “re-evolution” of listening technology is improving the level of sound reproduction.

Knowles Corporation, Itasca, IL, has done its best to help optimize the portable-listening experience through the creation of Balanced Armature Micro-Acoustic drivers. These components can be placed in the in-ear listening devices (earphones) that are commonly used with today’s mobile devices and computers, creating an intersection where the audio engineer can enable technology and purity of sound to successfully merge. Knowles Balanced Armature technology allows the creation of compact listening components with high power output that can be finely tuned to meet specific receiver and speaker applications. This capability enables audio engineers to fashion optimized listening experiences for their customers.

Bettering the reproduction of music and other sound recordings is not the sole way that balanced armature technology can enhance the listening experience. Balanced Armature drivers can also be placed into in-ear communication components, such as Bluetooth® headsets, or earphones that can be plugged into cellphones to enable hands-free calling.

Knowles Balanced Armature technology creates high-fidelity sound through the incorporation of a reed that is balanced in the static magnetic field between two magnets within the driver’s casing. The alternating-current (AC) signal in the coil creates an AC magnetic flux in the reed, which causes AC motion at the tip, in the process producing sound that is crisper and truer in quality and clarity than what is produced by other competitive earphone-component technologies.

Other features and benefits that can be realized when inserting

Balanced Armature technology in earphones include:

• Specialized reeds that enable true-to-recording sound, regardless of sound type

• Ability to use multiple drivers in each earphone, with each driver delivering sound for specified musical range

In response to the tradeoff of diminished earphone sound quality for increased sound portability, Knowles is committed to creating sound-reproduction components that can combine enhanced sound quality with the desire for portability. Therefore, the industry’s audio engineers now have the tools and technology needed to create an in-ear listening experience that delivers the audio-replication purity of tried-and-true technologies like vinyl LPs. The use of Balanced Armature Micro-Acoustic technology is the next stage in the development of high-fidelity sound-reproduction technologies that enable the audio engineer to ensure that today’s in-ear listening devices deliver the high-quality, immersive sound that audiophiles demand, while also making it available to the more casual listener.