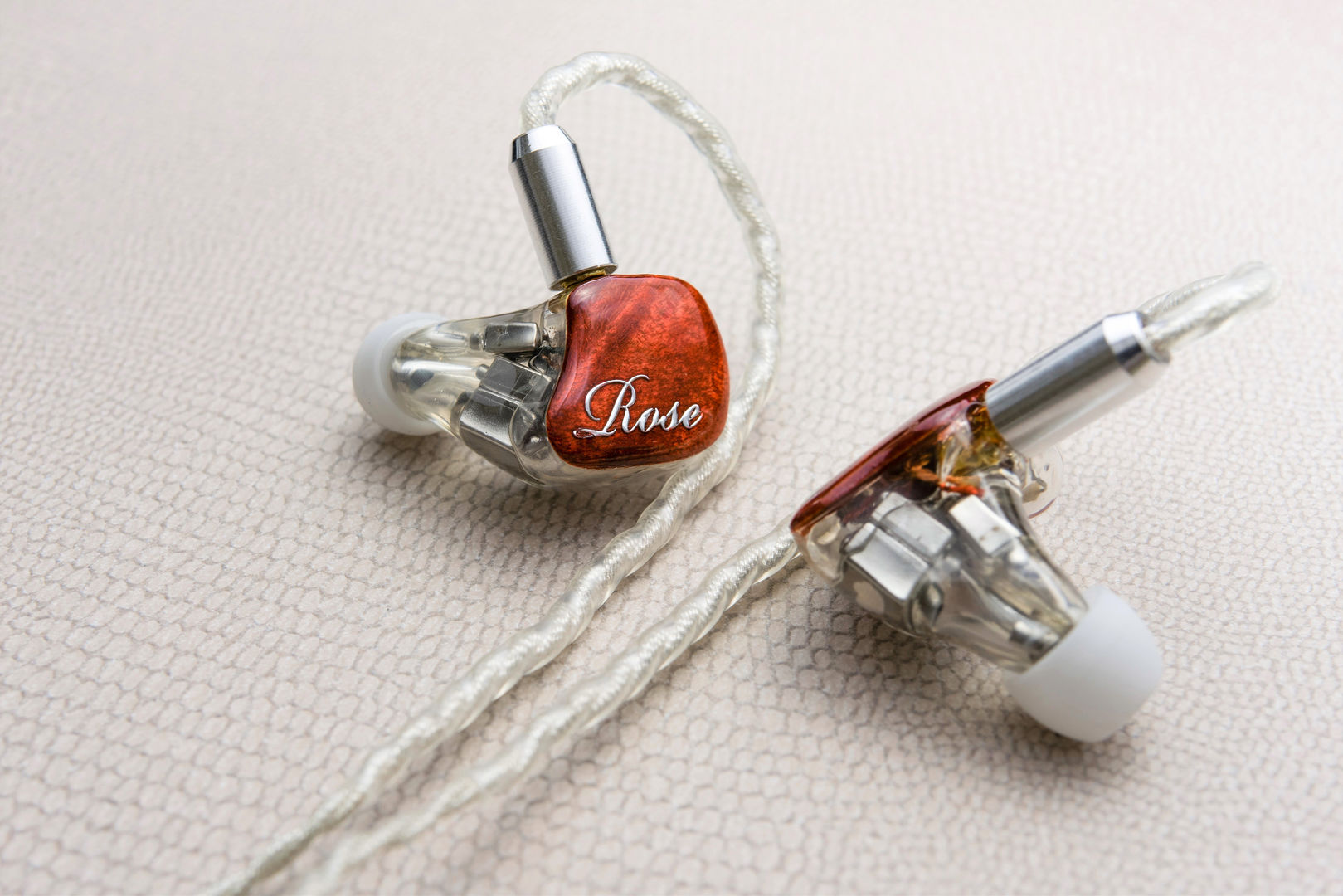 Kinera H3 ($99): Starting with design, both earphones are similarly shaped but the BR5 MKII sits considerably deeper in the ear and protrudes less as a result. The BR5 MKII, being fully sealed, isolates considerably better making it a better choice if you plan on buying an earphone for travel. While the Kinera is a fabulous earphone for the price, the BR5 MKII clearly has it beat on detailing, coherence and balance with the H3 sounding immediately more v-shaped. The BR5 MKII also has a nicer soundstage, especially with regards to imaging and separation.

What the H3 does possess is a much fuller, more extended bass response that still retains a lot of texture and definition if not quite the same resolution as the BR5 MKII. I can definitely see some people preferring the way they handle lower frequencies the BR5. Mids are much clearer on the BR5 though with less body. The BR5 doesn’t necessarily sound less natural but layering and vocal clarity is improved, especially within the upper midrange. Treble is also improved on the BR5 MKII, while they aren’t as aggressive as the H3, they are more even and more refined which benefits texturing and micro detail retrieval.

Westone W30 ($399): While I do generally like the way the Westone’s are designed, their thin plastic faceplates make them feel a little cheaper than the unibody Rose. Both fit excellently, again, the Rose has a deeper fit though the Westone isolates almost as much due to its long nozzle and ear-filling housing. The Westone is lower profile but its tubby housings aren’t great for sleeping, putting some pressure over the tragus. The Westone has a notably fuller mid-bass response and neutral deep-bass leading into a similar lack of sub-bass. Despite this, the Westone’s retain a lot of balance throughout as mid and upper bass are well-integrated with their slightly forward lower midrange.

The Rose on the other hand, is similarly integrated between bass and lower mids though both hold notably less emphasis in the overall sound, favouring the higher frequencies instead. As a result, the Rose is perceptibly faster and more defined within their bass response and lacks the tubbiness that occasionally affects the W30. Upper mids are inverted, the W30 carries a slightly darker tone, the BR5 MKII a brighter one. Both are really excellent performers though I would have to give the quality advantage to the BR5 MKII. If you are particularly sensitive to upper mids and listen to more rock, metal and electronic, the W30’s darker, bassier and more extended response definitely gives it the upper hand. However, for classical, jazz, modern pop and acoustic, the BR5 MKII holds an advantage with its superior soundstage space and improved midrange resolution.

Dunu DK-3001 ($499): The Dunu is actually a smaller earphone despite housing a mammoth 13mm dynamic bass driver and 3 balanced armatures. It has similar stability to the Rose but fit depth is considerably shallower and comfort isn’t quite as flawless due to the Dunu’s angular housings. Isolation is much better on the Rose, as far as ergonomics are concerned it would definitely be my pick for long term listening. The DK-3001 immediately has a much more dynamic, engaging response with that delicious sub-bass fullness driving their bass response with a general sense of weight to their low-frequency response. The BR5 MKII lacks the slam of the Dunu but above that, bass is faster and clearer if considerably more recessed within the mix.

Mids are much more upfront on the Rose though I still feel it is the more balanced earphone, by comparison, the Dk-3001 pursues more of a u-shaped tonality. The Dunu is similarly very clear, they aren’t quite as clean and upper mids aren’t as smooth as the BR5 MKII but layering better and detailing is improved. Lower treble is more aggressive on the BR5 MKII with clearer details and more bite in general. However, above that, the Dunu resolves more information whereas the BR5 MKII smooths off a bit more, which isn’t a bad thing, it takes the edge off what might otherwise become a tiring high-end response. Finally, the Dunu has a noticeably larger soundstage with better separation and similarly strong imaging.

64Audio U3 ($499): The U3 similarly employs an acrylic shell though the Rose feels a little more hollow but there is some charm in its DIYish nature. That being said, the Rose is easily the more eye-catching design. The U3 is another incredibly stable earphone with a very long nozzle that almost achieves the same fit depth as the BR5 MKII. However, the U3 is semi-vented due to those APEX modules and isolation does take a hit as a result, even when using Comply Foams. However, for exercise, the U3 is definitely my go-to, not only do the APEX modules improve sound staging and clarity, they also eradicate bone conduction noise when running/walking while the Rose is almost unbearable due to their super deep fit. Sonically, the U3 is actually tuned quite similarly, both have a very clear, slightly brighter midrange though the Rose doesn’t separate and layer like the U3 nor is it as spacious.

The U3 also has a slight bump in resolution over the Rose, though perhaps not to the extent one would expect, in addition to extra balance to upper mids, avoiding the over-forwardness that the BR5 is susceptible to. Treble extends more on the U3 with similar air and clarity though detailing is immediately superior as is treble separation on busier tracks. I really love the way the 64Audio earphones handle bass and the U3 is no exception, they have a sub-bass tilt with really nice extension and some impact if not quite as much as the Jupiter. The strongest asset of the U3 is their ultra-defined bass texturing which matches the Rose but with added nuance, body and extension. The U3 is a fabulously done “clear” sounding earphone though it also almost twice the price. The Rose gets incredibly close in terms of upper midrange and lower treble performance, but is the weaker earphones elsewhere and lacks the balance and linearity of the U3 overall.

Campfire Jupiter ($800): The Jupiter is easily among the best-constructed earphones I’ve handled with their all-metal build and exquisite silver plated litz cable. The Jupiter is more comfortable than the Rose due to its superior shaping and stability is similarly solid. Isolation is comparable to the Rose, both are some of the most isolating earphones I’ve come across. The Jupiter, being a much more expensive earphone, does hold numerous advantages over the Rose despite being at a disadvantage in sheer driver count (4 vs 5). Most noticeable is the Jupiter’s considerably improved resolution and separation which bring a sense of effortless refinement to every note over the BR5 MKII. The Jupiter extends considerably further into the lower frequencies with some genuinely satisfying sub-bass slam and rumble. Mid-bass is slightly fuller than neutral on the Jupiter as opposed to neutral on the Rose. As such, the Jupiter, despite being a very balanced earphone, comes across as immediately fuller and more dynamic, they have an excellent bass response that can compete with some dynamic driver earphones.

Mids also take a different approach, again, the Jupiter possesses more resolution and quite a bit more midrange body which greatly aids layering and general imaging, transience and immediacy, however, the Rose has a lot more midrange clarity without coming off as unnatural, no small feat. The BR5 MKII has a notably more forward midrange, especially upper mids though lower mids also draw more attention due to their more sedate bass response while the Jupiter is more even throughout. Treble is interesting, the Rose presents similarly to the Jupiter with a very resolving response however, the Jupiter takes this a few steps further in terms of refinement; the Jupiter just sounds cleaner and more effortless with greater timbre to details and more realistic texturing to cymbals and strings. The BR5 MKII is definitely a very good $300 earphone, but though it may utilize some components from earphones costing closer to the Jupiter, they still fail to really match that earphone on outright quality.

There is a certain beauty to the BR5 MKII’s sound; sure it’s no Jupiter, but Rose provides listeners with the same kind of balance found around these price ranges for much, much less. In addition, the quality of the BR5 MKII’s sound is really exquisite, especially their upper midrange and treble response. Their bass response is excellent in many ways, it is one of the clearest, fastest bass responses I’ve heard around this price and even above it, but the BR5’s limited extension and occasional midrange dominance simply don’t do its excellent quality justice; bass and treble details tend to get overwhelmed by the midrange which really limits genre versatility. So overall, I do think the BR5 MKII provides that same sense of value provided by some of the more outstanding budget orientated Chi-fI earphones, even at their arguably premium $300 asking price.

It’s clear from my comparisons that the BR5 MKII still doesn’t compete directly with pricier earphones despite having a high driver count and some lofty marketing claims, once again demonstrating the importance of refinement. While the components are certainly there, the BR5 MKII is clearly lacking the balance and evenness of more expensive offerings and their lack of sub-bass extension and general low-end fullness does bother. Of course, after a few days, a lot of listeners can acclimatize to the BR5’s mid-forward tones, but they never quite come across as balanced as the AF1120 eventually did. So if you don’t mind some issues with the build and their super deep fit, the BR5 MKII is possibly the best midrange focussed in-ear you can get for the money. However, if you want a deep bass response, musicality and long-term listenability without fatigue, the smoother, better constructed and more comfortable competitors from Oriveti and Cardas are just as compelling in many aspects.

Verdict – 8.75/10, The BR5 MKII has an intriguing design and an excellent fit. Furthermore, they sport class leading detailing and an absolutely heavenly midrange that will please even the most discerning of vocal lovers. However, as much as I love the BR5 MKII’s high-end, I do have some qualms with their slightly misty, hollow housings and their lack of bass extension and body will limit recommendation.