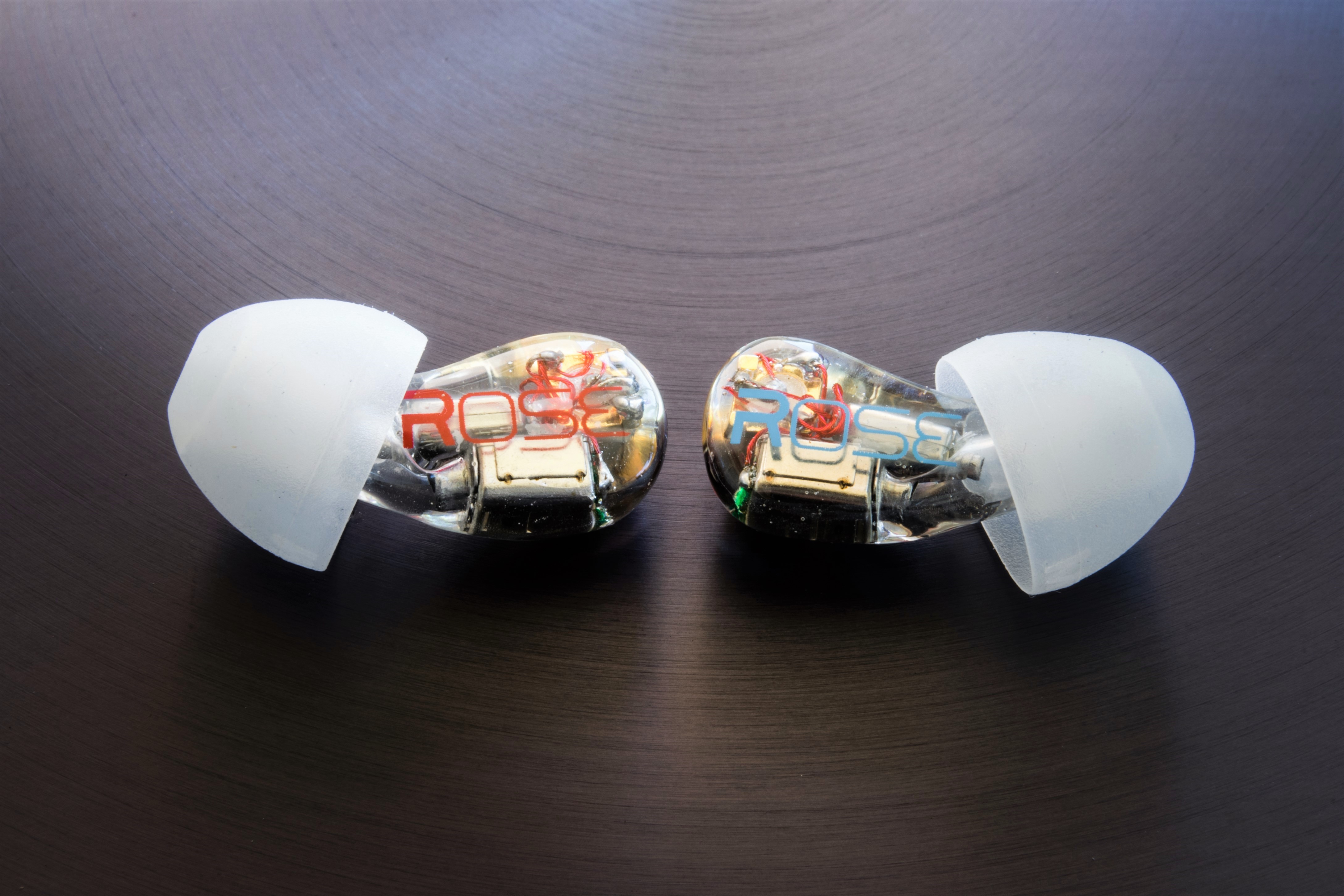 When it comes to dual armature earphones around this price, many would be quick to point out numerous models featuring the Knowles TWFK setup. And while some implementations sound really fantastic and offer very pleasing value, most of them can come off as quite lean. Rose have instead chosen to go with a custom setup comprising of a Sonion bass driver and a Knowles tweeter. As a result, and despite their small size, the Mini 2 is exceptionally balanced and can sound surprisingly rich with certain material. They are easily one of the most balanced earphones I’ve heard at any price, offering similar levels of evenness to much more expensive earphones from Campfire and Westone. Moreover, they have none of the forwardness that can affect more neutral armature based earphones, making them easier to acclimatize to. That said, balance is not always ideal and more V-shaped competitors from Kinera and TFZ can make the Mini 2 sound quite mellow by comparison. Of course, this all comes down to personal preference, see my more detailed breakdown and comparisons below to see whether the Mini 2 will fit your needs. As always, I did put the Mini 2 through 150hrs of burn-in and experimented with several tips and cables. Rose’s stock cable is very good, better than the budget cables I had on hand and the stock Klipsch style tips provided the most agreeable seal and sound to me. I didn’t note any huge changes with burn-in though the earphones sounded fine to me out of the box.

The Mini 2 is a very balanced, almost neutral earphone to my ears, far more so than the Kinera’s and TFZ’s of the world. They remind a lot of the Hifiman RE-400 with a slight bump in low-end warmth, both bass and lower mids, combined with a very coherent midrange and treble response. They are a very well integrated earphone with no notable peaks or troughs and their high-end is notably more linear than the more polite RE-400. I should note that I do prefer a u-shaped sound so the Mini 2 may sound slightly more u-shaped than described and those coming from more sculpted earphones may find the Mini 2 to be mid-forward. It does depend on your reference and preferences though I still persist that it is an incredibly balanced earphone based upon comparison with other earphones I have on hand.

Their small size does come with some downsides and soundstage reproduction is one of them. While they aren’t an explicitly intimate earphone like the ER4 and Klipsch X10, the Mini 2 doesn’t glimpse the scale that larger, vented competitors achieve. Listening to “Who Are You” by The Who and the Mini 2 provided nice width and modest depth but space didn’t radiate beyond the head. However, while space isn’t their forte, it certainly doesn’t hold the rest of the Mini 2’s sound back, there is enough space to enjoy every genre of music and separation is very good on account of their clear, balanced sound. In addition, imaging is sharp and accurate, not quite to the extent of the BR5 MKII, but the Mini 2 is immediately more balanced than earphones like the TFZ King so instrument placement tends to more accurate and consistent among tracks of various mastering quality.

With a higher 45ohm impedance and an average sensitivity of 108dB, the Mini 2 is more difficult to drive than most competing models. They required considerably more power than the TFZ, Simgot and Magaosi earphones, even more than the Kineras to reach the same volume. That being said, beyond volume, they aren’t overly source sensitive, certainly far less so than the BR5 MKII and Pinnacle P1. They sounded nice from my HTC 10 with no notable roll-off or outstanding tonal oddities but they did scale nicely when plugged into my Fiio X7 II, gaining some bass depth and texture in addition to a noticeably clearer and more open midrange. I would still consider the Mini 2 to be a relatively easy to drive and they do sound perfectly fine from portable sources but a dedicated source will provide a more balanced, nuanced listen. So while they do require a bit more voltage to achieve higher listening volumes, they are quite hiss and output impedance resistant in return.

The Mini 2 values punch over slam and balance over engagement though they are an earphone that is very easy to enjoy without an immediate sense of mid-forwardness that can often affect earphones pursuing a more neutral tone. Sub-bass extension is above average for an armature earphone but far from that achieved by the dynamic driver Kinera H3 and TFZ King. They do have a little fullness to these lower notes but rumble is minimal and bass focus ultimately lies around the mid-bass frequencies. They are modestly even throughout their low end with that slight bump in the mid-bass frequencies granting them with some additional snap and punch to drums and bass. In addition, due to their more balanced midrange, the Mini 2 also doesn’t suffer from that sense of over leanness affecting the BR5 MKII and bass sounds very well integrated into the sound as a result.

Bass has a slightly fuller tone and is appreciably faster than dynamic rivals though they aren’t as speedy as BR5 MKII nor is the resolution and definition quite there. Nonetheless, I would still consider the Mini 2 to possess a well resolving bass response that is perceptibly more balanced and defined than competing models, Kinera H3 included. Listening to DNCE’s “Kissing Strangers” and the Mini 2 provided a surprisingly rich bass response though the low-end never stole attention away from higher elements, they sat is almost perfect balance. In addition, bass is super tight and clean though they do lack some slam when listening to electronic. My ultimate comment on bass is that it comes down to preference and the inherent qualities of differing driver technologies. The Mini 2 is very well done for an armature earphone, they never sound anaemic but extension is still limited and they are considerably more conservative than competing models. But what they lose in extension and slam, they make up for with superior tactility, texture and definition and the Mini 2’s style of bass tuning perfectly compliments the rest of their sound.

Anything midrange related is Rose’s speciality, every Rose product I’ve heard has instantly sounded “correct” to my ear, something I can’t say for a lot of budget earphones which require some adjustment when coming from more premium earphones. And the Mini 2 is no exception, again, they aren’t quite as exquisite as the BR5 MKII, but the midrange produced by these earphones is easily the best I’ve heard around this price. That includes the Magaosi earphones, the TFZ earphones and the Kinera, I even prefer their midrange tuning to considerably more expensive earphones like the Pinnacle P1 and 1More Quad Driver. The Mini 2 is very refined throughout its midrange, they have a consistent sense of natural clarity and tone that produces a really enjoyable listen no matter the genre. They do have a slightly brighter tonal tilt or rather, lower mids sit very slightly behind in the mix, but they never sound forward like the BR5 MKII nor do mids sound scooped. In addition, their midrange is refined and smooth with a slight bump in body imbuing them with some musicality over more explicitly neutral/analytical earphones. Listening to Vance Joy’s “Lay It On Me” and the Mini 2 provided

Listening to Vance Joy’s “Lay It On Me” and the Mini 2 provided great extension to vocals, well-delineated layering and a natural level of crispness to the acoustic guitars. They were neither as aggressive as the Kinera H3 nor were they are laid back as the Simgot EN700 Bass, the Mini 2 struck a brilliant medium with excellent technicality to top it all off. And speaking of quality, the Mini 2 continues to impress with pleasing resolution and definition to midrange elements. They don’t have the most cavernous soundstage and they do still lack the level of layering and resolving power of the BR5 MKII, Pinnacle P1 and Oriveti New Primacy, but the Mini 2 remains one of the most impressive earphones around this price. Detailing is also nice, they are far less aggressive than the spiked H3 and K3 HD but they also sound considerably more refined and actual detail retrieval is almost as good. If I had to comment on a weakness of the Mini 2’s midrange, it would probably be their lack of immediate resolution and space though, in that regard, they are no worse than any other $100 earphone I’ve heard whilst maintaining a tonality advantage.

While my brighter tastes and uncanny resistance to enhanced treble allow me to enjoy a wide range of Chi-fi iems, a lot of users online have reported numerous issues with overbearing treble. And I can definitely see where they are coming from, the vast majority of Chi-fi earphones around this price have some form of treble spike that makes them quite aggressive, accentuating detail but also tiring after longer listening, especially at higher volumes. Notable perps include the Kinera H3, Magaosi K3 Pro and the TFZ King, it is one of the overarching reasons why I am so fond of the Simgot En700 Bass despite its shortcomings in other areas, since it is one of the few natural earphones around this price. Luckily, I can now add the Mini 2 to that list, upper-midrange to lower treble integration is excellent and treble is pretty darn linear. As such, while the Mini 2 may not be as immediately sparkly and detailed as competing models, every note has more texture and treble is perfectly listenable for longer sessions. The Mini 2 is not a dark, rolled off or smoothed off earphone, treble is perfectly present and well extended, they just aren’t as emphasized as certain competitors.

I definitely prefer this response and it does come with several advantages. Like the K3 HD which really smoothed out the peakiness of Magaosi’s prior models, the Mini 2 sounds very naturally detailed and is generally more resolving of background and micro details. Furthermore, the Mini 2 has very good extension with nice resolution of higher details that more lower treble dominated earphones tend to overshadow. When listening to 2NE1’s “Goodbye”, the Mini 2 provided a very crisp response with a realistic and refined presentation of guitar strums that was more mature than more sculpted earphones like the H3 that tended to get a bit crunchy for lack of better terminology. In addition, high-hats have some real texture and cymbals and strings sound well-bodied and extended. On the flipside, the Mini 2 doesn’t excel with air and more expensive models will quite easily best them on extension and general resolution. With that said, I am very content with both the Mini 2’s tuning and quality, they may lack some bite and energy for those looking for bundles of crispness and shimmer but the Mini 2 is still a very resolving earphone and one that won’t grate on the ear after more extended listening.