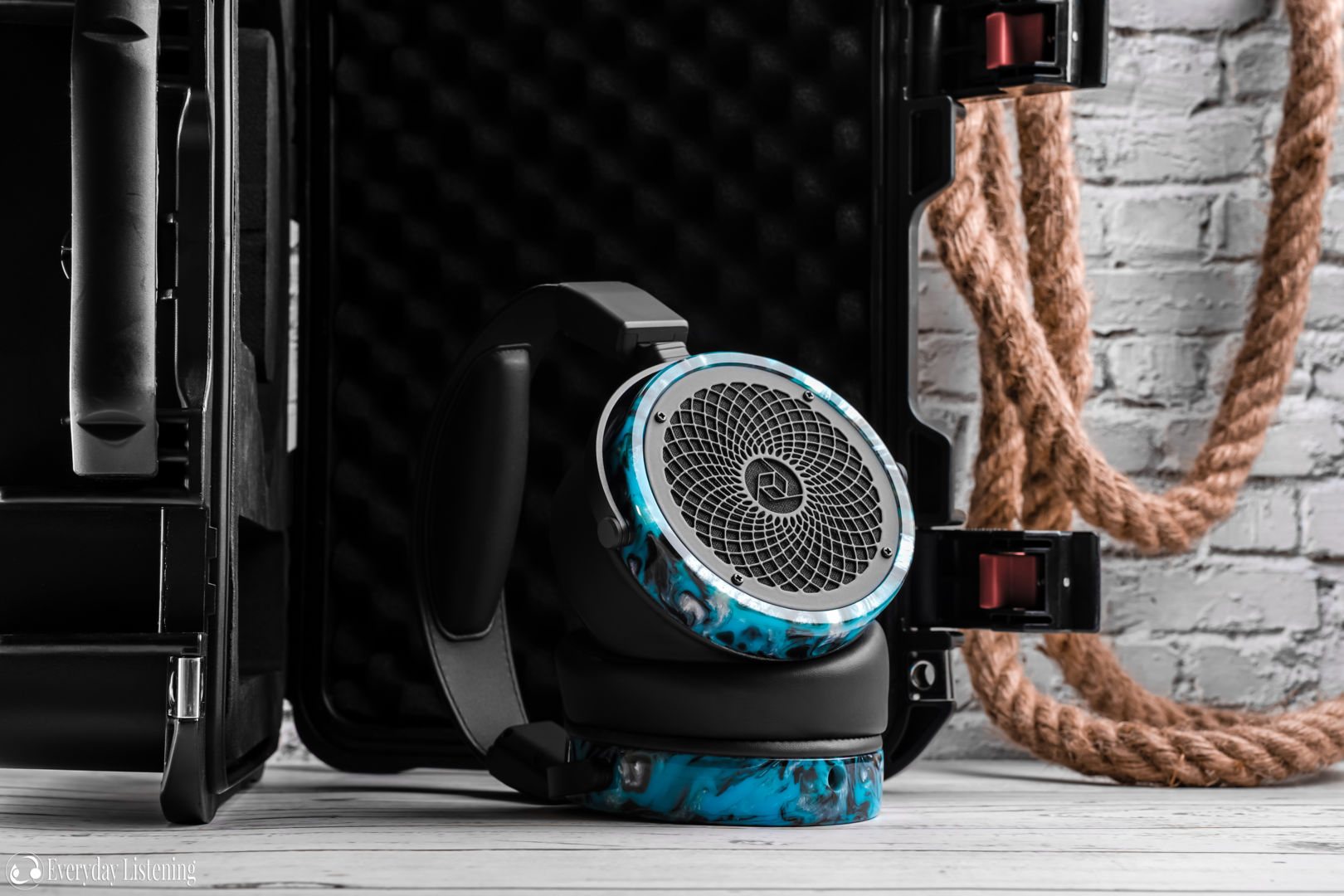 Audeze LCD-X 2021 ($1199/1699): The LCD-X 2021 is a very interesting proposition with its new, more balanced tuning and given that it undercuts the RAD-0 by a good margin. Subjectively, I find the new LCD to be slightly more balanced and neutrally voiced than the RAD-0 but also not quite as refined in the treble nor as technical. Both have a similar bass tuning; it just sits further forward on the RAD-0. The Rosson comes across as noticeably thicker and more dynamic. Despite the larger driver size on the LCD-X, I found the RAD-0 was giving me a far more satisfying impact and a tighter, more controlled representation. The LCD benefits from having a more balanced bass presence, which gives it better separation and a cleaner tonality. It takes a few steps back on impact but is a similarly well-extended and responsive performer.

As the bass doesn’t sit as forward, the midrange appears slightly more upfront on the LCD-X and is slightly more laid-back on the RAD-0. In addition, the RAD has a fuller and slightly warmer voicing giving it more weight and power. The LCD-X is more neutrally sized and toned. Though it isn’t a perfectly linear sound either, being slightly dense and smooth, it does showcase better balance than the RAD-0. That said, the Rosson does have a clear resolution advantage, with small details being more apparent to the listener. It is more articulate and layers better. The LCD-X separates better in return. While this doesn’t translate to a detail retrieval advantage, it has a more versatile voicing and what detail is there, is more apparent to the listener.

Both have similar levels of treble, however, given that the RAD-0 has a bigger bass, its treble also appears slightly more laid-back similar to the midrange. The LCD-X, therefore, presents as slightly crisper and more detail forward. It has a slightly more present lower treble that contributes to this impression. The LCD-X is very nicely detailed here, upholds convincing body and fades into a dark, clean background. The RAD-0 upholds greater linearity and has a texturing and timbral advantage to my ears. It decays more natural and has superior fine detail retrieval. Chiefly, the RAD-0 has greater headroom and micro-detail above which also contributes to a noticeably larger and more multi-dimensional soundstage.

HEDD Audio HEDDphone ($1899): The HEDDphone is an interesting proposition as it provides a well-balanced sound and summit-fi technical performance at a similar price to the RAD-0. It provides a slightly more balanced sound than the RAD-0 with more head-gain and a flatter bass, but with a less refined treble tuning. The bass performance of the HEDDphone is also one of its weaker aspects, though not bad, it is not quite as good as many competitors. The RAD-0 is a slightly bassier headphone with a fuller voicing. But it is also more defined and dynamic. The HEDDphone is slightly cleaner but isn’t quite as defined nor as textured and punchy.

The midrange is slightly more neutral on the HEDDphone too. It has similar vocal positioning but a cleaner tonality with less warmth. It also has an uptick of body in the lower-mids and some roominess but not as much as the RAD-0, especially in tandem with its quicker note presentation. The RAD-0 is more structured and full-bodied. It has larger vocals and a more powerful voicing. The HEDDphone resolves just a touch better, small details are more apparent, and it also retrieves a little more raw information too. On the flipside, the RAD-0 has a slightly more natural timbre to my ears chiefly due to the way the HEDDphone presents its notes. That said, I don’t want to paint the HEDDphone as an unnatural headphone either as that isn’t the case.

The HEDDphone has a brighter top-end than the RAD-0 and a more sucked-out lower-treble. In turn, it has a slightly thinner, tizzier voicing with more upper-harmonic bias. The RAD-0 sounds flatter and has a more accurate instrument timbre. It has greater body and texture. Meanwhile, the HEDDphone provides a sharper transient response with a noticeably more defined leading edge and better separation. It has greater extension and headroom with more micro-detail at the cost of note body. The HEDDphone has similar soundstage dimensions but has slightly greater depth and sharper, more holographic imaging.

Meze Liric ($2000): Meze’s new high-end closed-back uses the same switch-back driver tech as their open-backs but with a new tuning. It comes across as a little more U-shaped than the RAD-0. The Liric has an immediately cleaner, more separated voicing. Its low-end boost is centred around the sub-bass rather than the mid-upper bass giving it a more neutral voicing alongside greater slam and weight. The RAD-0 is fuller and bassier on a whole. It delivers greater impact and has better driver control, delivering slightly higher note definition. The Liric is much more separated in the mid-bass but has a smoother, less aggressive note presentation.

The midrange presentation is similarly positioned overall on both; however, the RAD-0 does have a slightly more intimate vocal presentation. The Liric has a centre-midrange dip that gives its midrange a more spacious feel. The RAD-0 meanwhile, prioritizes greater body, room and power. Both are naturally voiced but differ greatly in positioning and voicing. The Liric has a nigh neutral tonality set to a smooth, laid-back character. The RAD-0 is bigger and more intimate with a more defined articulation up top. Despite this, both have similar levels of resolving power. The Liric is also more separated which can make small details easier to perceive while the RAD-0 is more layered.

The RAD-0 has the superior treble response overall. It is more linear and more extended. That said, the Liric isn’t far behind and delivers a bit more middle-treble energy for those craving a more vibrant expression. The RAD-0 sounds more grounded. It has greater treble body and texture alongside a cleaner transient response. The Liric doesn’t have the same note definition and headroom but delivers greater shimmer and energy in return. This gives it a more engaging character. The Liric also extends nicely up top but lacks the same sparkle and air as the RAD-0 despite being a little brighter. For a closed-back, it impressively matches the RAD-0 on dimensions but doesn’t offer quite the same imaging acuity.

The RAD-0 is another one of those headphones that really grew on me over time. Its full, low contrast sound doesn’t wow the listener with separation and clarity, nor does it overtly showcase the headphone’s technical chops. The added struggles with headband comfort out of the box only further soured my initial impressions. However, if you were to stop there, I do believe you would be dismissing a highly competitive high-end headphone. The strap mod especially, handily alleviates my complaints with daily usability leaving a comfortable headphone that manages to be visually distinct even amongst competing statement headphones. If you’re in the market for a coherent monitor that hits like a heavyweight in the low-end but upholds a refined, linear and extended treble above, there really isn’t much else like it on the market. The RAD-0 isn’t a headphone I can recommend for its versatility, but one that carves out a niche with a unique, highly technical sound that makes it unrivalled for select genres of music.

The RAD-0 is available from Rosson Audio (International) for $2600 USD at the time of writing. I am not affiliated with Rosson Audio and receive no earnings from purchases made through these links.