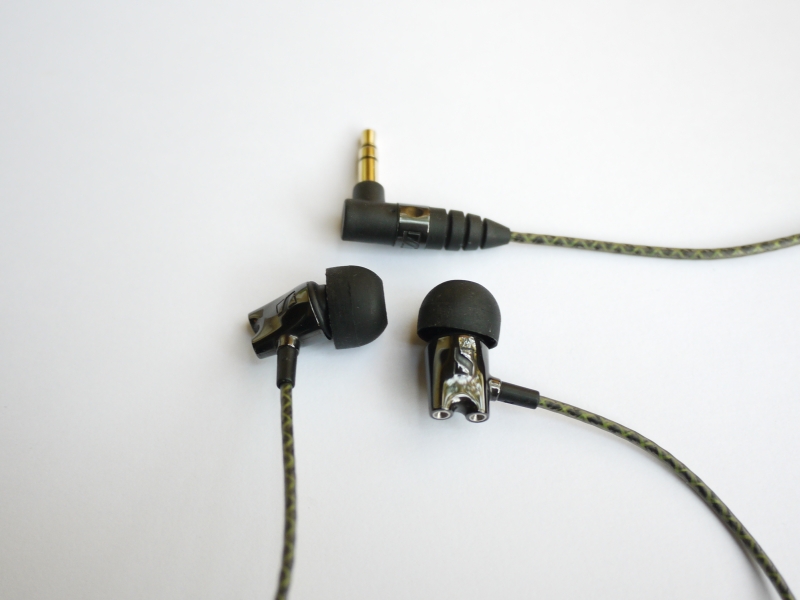 Accessories (4/5) – Proprietary single-flange silicone tips with integrated wax guard (5 sizes), cleaning tool, and leather carrying case with integrated cable winder
Build Quality (5/5) – The relatively small (7mm) dynamic drivers of the IE 800 gave the designers an unusual amount of freedom in sculpting the ceramic housings, resulting in a unique tapered earpiece design that accentuates the dual rear ports. Overall construction is extremely solid and the attention to detail is impressive, down to the small bump on the left strain relief acting as a tactile L/R indicator. However, in contrast to many other high-end IEMs (including Sennheiser’s own IE 80), the cables of the IE 800 are not detachable at the housings. Instead, the cord breaks apart at the y-split with a 2.5mm connection. It is unclear why Sennheiser chose not to use the much-loved detachable cable from the IE 80 model – while the Kevlar-reinforced IE 800 cable is built to last, the cable lengths are odd and splitting the cord in the middle provides only a part of the functionality of a true detachable cable
Isolation (3/5) – The shallow fit of the IE 800 results in average noise isolation
Microphonics (4/5) – The earphones are not set up for over-the-ear wear and some cable noise is present when moving about
Comfort (4/5) – The IE 800 is meant to be worn in the conventional cable-down manner, again unlike the IE 80. Comfort is excellent, thanks the earphones’ small size, light weight, and slightly angled nozzles. Unfortunately, the short distance between the y-split and earpieces can make over-the-ear wear impractical or downright uncomfortable

The eartips are another concern – they are proprietary to the IE 800, and each one is actually an assembly of the silicone sleeve, a plastic core, and a metal mesh screen. The plastic core clicks onto the short nozzles of the earphones, becoming an extension of the sound tube. This means aftermarket eartips are not an option with the IE 800, though the 5 included pairs are properly spaced in size and should fit most ears

Sound (9.3/10) – The IE 800, like all of Sennheiser’s other earphones, utilizes a single dynamic driver – a somewhat unusual move for a top-tier earphone back in 2012 when the IE 800 was developed and released. Axel Grell, the creator of the earphone and Sennheiser’s Senior Acoustic Engineer, clearly felt no need to go beyond the dynamic driver, either for marketing or performance reasons.

The IE 800 pursues a bass-heavy sound with crisp, prominent treble, not unlike AKG’s flagship IEM, the $1300 K3003. Sennheiser earphones have never shunned bass, so the powerful low end response of the flagship is hardly surprising – indeed, among top-tier in-ear earphones, the IE 800 is one of the bassiest. The good news is that mid-bass bloat is minimal and the bass does not feel excessive – it is plenty tight considering the quantity and extension.

The midrange is surprisingly clear despite the enhanced bass—easily as clear as the mids on some of my custom-fit monitors. Though I would classify the overall signature of the IE 800 as “mildly v-shaped”, the midrange does not get lost in the mix, even at lower volumes, and positively impresses with its clarity and detail resolution.

Sennheiser claims to have solved the typical ear canal resonances in the 7 – 8 kHz range using a proprietary dual-chamber absorber, thereby relieving the so-called “masking” of higher-frequency components. Subjectively, however, the treble of the IE 800 has a slightly “brittle” and “splashy” character. It is not harsh or sibilant – perhaps surprisingly so – but seems to accentuate some of the crash and subsequent ringing of cymbals, for example. I actually felt that the armature-based treble of the AKG K3003 was a little smoother and more natural on the whole.

The IE 800 has an airy and open sound, no doubt helped by the impressive treble extension, and the presentation is well-rounded, with good separation and imaging. It is not as out-of-the-head as with the IE 80 model, but also sounds less distant and veiled in the midrange. Worth giving up some of the soundstage for, I think.

VSonic’s GR07 has served as one of my dynamic-driver benchmarks for over four years, and the latest version remains a highly recommended buy at $99. There are several things the IE 800 does better, though. First, while the IE 800 has lots more bass, its bass resolution and control are comparable to the much flatter and more neutral VSonics. Second, the GR07 is a touch less clear through the midrange than the IE 800 despite the greater bass emphasis of the Sennheiser unit. Lastly, while the treble of both earphones isn’t what I call smooth, I still prefer the treble presentation of the IE 800 to the more sibilant top end of the GR07. The GR07 also has comparatively poorer soundstage depth, sounds more distant, and is less efficient than the IE 800.

Ultrasone’s flagship earphone is an enigmatic BA – dynamic hybrid that is notable for its finicky fit. I picked an aftermarket eartip for the IQ that works with my ears – the Westone True-Fit Foam – and with that went on to compare it to the IE 800. This is one way in which the IE 800 couldn’t be more different from the IQ – its design discourages tip rolling and makes it one of the most straightforward earphones to use.

With my preferred tips on the Ultrasone, I found its sound generally darker than that of the IE 800 and noticed more upper midrange recession, resulting in a slightly more v-shaped overall response. The brighter IE 800 often made instruments such as cymbals overly prominent in the mix. Despite this, I preferred the IE 800 by a small margin for its greater overall transparency and slightly higher detail resolution. It also produced a more convincing presentation, though the depth and layering of the IQ’s soundstage gave the IE 800 a run for its money.

Compared to the IE 800, the 6-driver Miracle sounds more balanced through the frequency spectrum, with tighter but significantly less enhanced bass. Clarity is generally similar between the two except when the more intrusive bass of the IE 800 makes its presence known, giving the Miracle the edge. At the top, the Miracle sounds more natural next to the thinner, more brittle-sounding treble of the IE 800. The presentation of both earphones boasted great air and imaging but the Miracle remains the more open-sounding and spacious of the two sets, with the enhanced bass of the IE 800 causing it to sound comparatively congested and closed-in.

The flagship earphones from these two European audio brands utilize very different driver setups – the K3003 is a 3-way hybrid with a dynamic driver and dual balanced armatures, and the IE 800 is built around a single 7mm dynamic transducer. Nonetheless, they are similar in overall performance – it seems both were tuned for mobile use with consumer-friendly sound signatures. The IE 800 does have a little more bass, especially deep bass, compared to the AKGs, but also suffers from that bass being more intrusive at times, leaving the AKGs to enjoy more consistent clarity in the midrange.

The upper midrange and treble of the K3003 seem more level, with the IE 800 sounding a little more thin and “splashy”. Whether a side effect of this treble presentation or not, the IE 800 did seem to resolve a little better through the treble region. On the usability front, the AKG K3003 produces significantly less cable noise (microphonics), while the more compact ceramic shells of the IE 800 are lighter and more comfortable in my ears.

Value (7/10) – A massively expensive top-tier earphone is first and foremost a statement product. It should put aside all pretense and simply deliver the best audio experience possible. This, the IE 800 does very well, providing outstanding sound while out and about, especially at lower volumes. Its sonic strengths – the bass, the clarity, and the well-rounded sonic image – make a statement while its audio weaknesses are easily glossed over.

It is also supremely comfortable and sounds great with a shallow fit. Sennheiser obviously had a specific demographic in mind when designing the IE 800 – well-off mobile listeners who want to just plug in and go, getting as close as possible to the sound of a high-end headphone setup with the least hassle.

What ends up annoying are the little design quirks – the cable noise, the proprietary ear tips, and the odd split-cable configuration in place of a proper user-replaceable cable. For this reason, the IE 800 is not universally recommendable, though those who do get along with the design will love the IE 800 all the more for its peculiarities.