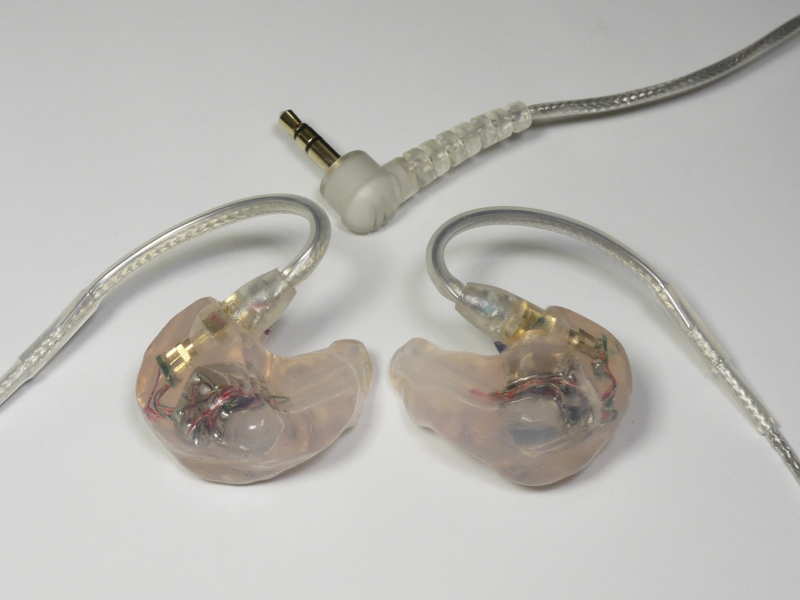 Accessories (5/5) – Shirt clip, cleaning tool, 1/4″ adapter, lightweight zippered carrying pouch, and padded Pelican hard-shell storage case
Build Quality (5/5) – The 3MAX utilizes silicone shells. As is usually the case with silicone, shell clarity isn’t as good as with acrylic monitors but the overall construction is very good. The 3MAX is the only custom earphone in my collection to use coaxial connectors. This means most aftermarket custom earphone cables will not fit, but also allows cords for Shure and some Ultimate Ears universals to be used as reasonably-priced replacements. Finally, the Sensaphonics cable resists oxidation better than other clear cords – a good thing as my other clear cables usually start turning green after just a few months
Isolation (5/5) – The isolation of the silicone shells is excellent, falling just behind my other silicone-shelled custom, the Spiral Ear 3-way Reference
Microphonics (5/5) – Pretty much nonexistent
Comfort (5/5) – The silicone shells of the 3MAX take slightly longer to insert and remove compared to more rigid and slippery acrylic shells but are extremely comfortable once fitted and seem to maintain seal a bit better with changes to the ear canal shape, such as while chewing or talking. Being a custom monitor, the comfort is highly dependent on the quality of the initial impressions and final mold so if the earphones remain uncomfortable after an initial break-in period a re-fit is probably a good idea

Sound (9.4/10) – Tuned in collaboration with professional mastering engineers, the Sensaphonics 3MAX follows a different sound signature than other musicians’ monitors I’ve tried. Despite the dual woofer design, its sound is focused more on the midrange, especially the upper midrange. The bass has good punch but is not as emphasized as one may expect from an earphone with twin bass drivers. Depth is good – nearly on-par with enhanced-bass earphones such as the Westone ES5 and Heir Audio 8.A. Bass quality is about on par with the universal-fit AKG K3003 – the 3MAX is a little tighter and less mid-bassy, but also less impactful.

The sound of the 3MAX is a bit on the thick side, so while the earphone is fairly neutral in tone, it doesn’t sound analytical. Rather, it has a natural note presentation and tends to emphasize the midrange, placing vocals front and center. As a result, its sound appears more full-bodied next to sets with less prominent mids, such as the Alclair Reference. The emphasis on the upper midrange does cause the earphones to sound a bit “shouty” but the prominent vocals that result are in keeping with Sensaphonics’ goal of encouraging lower-volume listening.

The upper midrange emphasis of the 3MAX gives way to largely smooth treble. There is a bit more treble energy than with the darker-sounding Westone ES5 but less than with the JH13 Pro. The treble doesn’t “sparkle” and is very non-fatiguing – a definite plus for those who intend to wear their customs for hours at a time. In this respect the 3MAX is better than, for example, the AKG K3003 and Alclair Reference. The presentation of the 3MAX is a little on the intimate side, which is not unusual among stage monitors. It is more spacious and open-sounding than the AKG K3003, for example, but sounds a little flat and dull compared to the Heir 8.A.

Like the 3MAX, the Spiral Ear 3-way uses a three balanced armatures in a full-shell silicone mold. However, despite its single bass driver and 3-way crossover, the Spiral Ear is significantly bassier than the Sensaphonics, offering a more full-bodied low end with quite a bit more impact. It boasts more subbass rumble and can summon up a lot more bass power when the track calls for it, appearing more dynamic as a result.

The more prominent midrange of the 3MAX gives it a forward vocal presentation and makes its mids appear clearer compared to the thicker and warmer-sounding 3-way Reference. The 3MAX is still a bit on the warm side of neutral, but not as much so as the 3-way. Due to the powerful bass of the 3-way, the 3MAX is more balanced overall, but outside of the bass region the response of the Spiral Ear is actually flatter and smoother. In the upper midrange region, the 3MAX boasts extra emphasis, which lends it a brighter tone, while the SE 3-way is very smooth. Lastly, there is a big difference in efficiency between the two earphones, with the Spiral Ear being much less sensitive and requiring more power.

Unique Melody’s 6-driver flagship is tuned for a balanced, slightly laid-back sound, providing a healthy contrast to the 3MAX. Bass quantity is greater on the 3MAX – the Miracle boasts less mid-bass while extension and subbass presence are similar to the Sensaphonics. The Miracle sounds thinner, too, and its clarity is expectedly a bit better. The upper midrange emphasis of the 3MAX makes it sound somewhat “honky” next to the flatter and more laid-back Miracle. Tonally, both are close to neutral but the Miracle is a brighter with its more sparkly and crisp treble presentation. It sounds a little more spacious as well.

The JH13 has recently become my benchmark for what a custom monitor should be – balanced, accurate, endlessly resolving, and yet dynamic and fun to listen to. The pro-oriented 3MAX doesn’t pursue the same sound signature, but it’s still interesting to compare the two. Like the UM Miracle, the JH13 is brighter in tone and clearer than the 3MAX. It’s more detailed, too, revealing fine musical nuances more readily and sounding more refined overall. The JH13 boasts similarly ample bass impact on tracks that call for it but also has greater ability to scale back, providing tighter, quicker, less intrusive bass when necessary. It also has more treble energy, sounds more crisp, and is more spacious as well, with a soundstage that boasts better width and depth in comparison to the 3MAX.

Yet another earphone with tuning very different from that of the 3MAX, the 8.A is an 8-driver custom with a warm and smooth sound signature. The 8.A is significantly warmer-sounding and has deeper, more powerful bass and smoother, less prominent mids. Despite this, the 8.A is still clearer than the 3MAX and resolves fine detail a little better as well. The overall sound of the Heir is more refined despite the 3MAX having a more neutral tone and better overall balance. The 8.A is also more extended at the top and has a more versatile and spacious presentation. The 3MAX, with its more intimate sound and more aggressive upper mids, sounds a little flat and dull next to the 8.A.

Value (7.5/10) – The Sensaphonics 3MAX may seem expensive for a triple-driver in-ear monitor, but it is a good earphone, though perhaps more so for musicians than casual listeners. One of the few custom manufacturers committed to using silicone shells, Sensaphonics maintains that the material offers advantages in fit, comfort, and noise isolation compared to acrylic. They certainly aren’t wrong – the 3MAX is extremely comfortable and its isolation is second only to the other silicone custom I have – the Spiral Ear 3-way Reference. Its sound signature also works with Sensaphonics’ stated goal of encouraging lower-volume listening – always a respectable focus. It may be limited in customization options compared to most of its acrylic counterparts, but if comfort and isolation are a priority alongside a near-neutral sound, the 3MAX is the custom earphone to get.